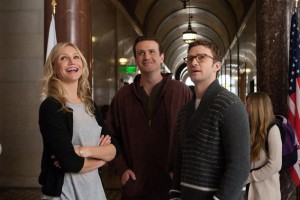 Is there nothing Justin Timberlake won’t do for a good laugh? Not, say he! In his new movie BAD TEACHER co-starring his ex-girlfriend Cameron Diaz, Timberlake plays teacher Scott Delacorte, a somewhat dorky yet endearing teacher who Diaz has her sights on.

The 30-year-old Timberlake says he owes his comedy hutzpah to SATURDAY NIGHT LIVE. Timberlake, an SNL fan since his early childhood, has watched and mimicked many characters from the show, which came in handy when he finally had a chance to host the show nearly eight years ago. Now he says because of SNL the door has opened for him to do a variety of comedy features. The actor takes 5 to discuss SNL, BAD TEACHER and working with Diaz.

On the doors SNL opened for him…
“I would do like Simon, Mike Myers’ character, I would do Stuart Smalley, I would do that, I would always do those for my parents, and I would imitate those characters growing up watching SNL, and honestly, I owe a lot to SNL, I really do,” says the grateful Timberlake. “I don’t know that a movie studio would have trusted me with like a supporting role in a comedy like this, if they hadn’t seen what I had been idiotic enough to do on SNL. So I mean I kind of owe the fact that I’m getting to star in comedies with great actors and directors, I owe a lot of that to SNL.” 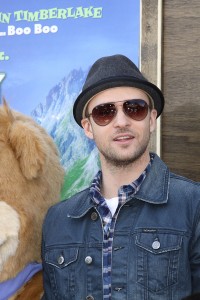 On how far he’ll go on SNL…
“I grew up watching that show and it’s an institution and I would put myself on the line to do anything that I could to keep that show going as long as it possibly could,” says Timberlake. “I love that show, I grew up watching it, I stayed up late on Saturday nights with my family and we watched that show, and it really affected me as a kid. I mean it was something that I really looked forward to, so to be involved in the genius of what happens with it, it’s really an honor to be on that show. I think it’s just one of, I mean the show has been around forever.”

On working with his ex Diaz on the film …
“Honestly there wasn’t really, there are no surprises, it was just really easy to do this movie and it was really fun,” he says.

On having any uncomfortable feelings between Diaz and himself shooting BAD TEACHER…
“It’s fine,” he reveals. “We have to believe that there’s somebody out there who dated that are still friends. I think that our only trepidation in doing this movie is that people would make a big to do about that. We just like each other, we just like each other as people, and that’s never changed.”

On any aspirations of being a teacher…
“I could spend anywhere between an hour and an hour and a half with little children, and you have to spend more time than that to be a teacher,” says Timberlake with a laugh.