Movie Review: I AM NUMBER FOUR 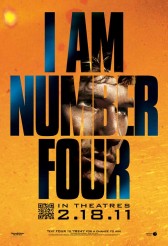 Movie Review: I AM NUMBER FOUR

Based on the popular novel by Pittacus Lore, this science-fiction/actioner aimed at teens is familiar, but entertaining

Stop me if you’ve heard this: super-powered teenager attends high school and tries to pass for normal, but a combination of human and otherworldly forces cause the teen’s otherness to surface. In terms of the spine of I AM NUMBER FOUR, you can skip past CARRIE and jump straight to SMALLVILLE, especially as screenwriters Alfred Gough & Miles Millar created that Clark Kent/Superman series, with the added experience of third screenwriter Marti Noxon on BUFFY THE VAMPIRE SLAYER rounding things out.

Although I AM NUMBER FOUR is based on the first in a series of books by Pittacus Lore (the joint nom de plume of Jobie Hughes & James Frey), it really does seem to owe its roots to SMALLVILLE, with a bit of STARMAN and any number of characters trying to stay a step ahead of ruthless killers stories in its DNA as well.

After a prologue shows us a young boy and his protector being killed in a remote jungle by humanoid extraterrestrials and some kind of very big creature, the death is felt by a seventeen-year-old who we’ll come to know as John Smith (Alex Pettyfer). John explains to us in voiceover that he is one of nine aliens with special powers who were taken to safety on Earth at a very young age by their respective protectors when their planet Lorien was invaded and destroyed by the evil Mogadorians.

The Mogadorians are now searching our world for the escapees and have killed three so far. John is Number Four. His protector Henri (Timothy Olyphant) has them constantly moving. The latest stop is Paradise, Ohio, where Henri would rather John not go to school in order to avoid any attention at all. John, however, needs some sort of social interaction to avoid going bonkers and Henri eventually relents on the school thing. John is soon attracted to photographer classmate Sarah (Dianna Agron) and makes friends with science geek Sam (Callan McAuliffe), both of which make our new kid a target of the school bullies. They don’t know who they’re tormenting – but they find out as John’s abilities expand to the occasion. Ah, but such things attract notice, and soon there’s Mogadorian trouble in Paradise.

If the voiceover exposition doesn’t cause an immediate dive for cover – the names of the LORD OF THE RINGS-esque Lorien and the clunky Mogadorians don’t exactly inspire confidence in the storytelling right off the bat – I AM NUMBER FOUR turns out to be pretty agreeable.

Director D.J. Caruso demonstrates a grasp of how to make the characters likable and pushes things further than we might suppose they’d go in this kind of movie (there’s a tiny little HELLRAISER moment, though it’s mostly left to our imaginations). He also mostly keeps the pace running along, though things bog down occasionally in repetition/exposition that might have been condensed a little more gracefully. Finally, when huge monsters make a climactic appearance, Caruso and Co. wisely bring them on at night for maximum impact and integration with the environment; they’ve even found a clever way to make sure we care about what’s going on within the monster fights.

Pettyfer makes a fine focal point. He’s got this Earthling business down very well and effectively conveys a full range of emotion, and finds the fun in John’s gradual discovery of his powers. As John’s protector Henri, Olyphant provides wry humor and unsentimental grief, making some expository mouthfuls sound like something a person might actually utter. Agron is sweet and warm, and McAuliffe puts a lot of yearning into the smart, lonely Sam. Kevin Durand is a blast as the Mogadorian leader and Teresa Palmer is appropriately super as Number Six.

I AM NUMBER FOUR resolves its immediate storylines, while leaving things wide open for a sequel. There’s enough energy and personality here to make a follow-up an acceptable prospect.