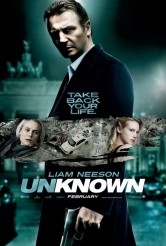 Liam Neeson stars in this effective mixture of mystery and action

Director Jaume Collet-Serra helmed 2009’s ORPHAN, which had a truly “Holy bananas!” plot twist that was fairly unforeseeable. UNKNOWN likewise hinges on a big plot twist and, although this one is easier to guess before it is revealed, it’s also a better movie. This is largely because UNKNOWN is a perfectly decent action thriller even once we and our hero understand what the heck is happening.

Dr. Martin Harris (Liam Neeson) would seem to have everything going for him. He and his much-adored wife Elizabeth (January Jones) fly into Berlin, where Martin is scheduled to attend a scientific conference sponsored by a progressive Middle Eastern prince (Mido Hamada). However, upon arriving at their hotel, Martin realizes he’s left his briefcase behind at the airport. He grabs the nearest taxi, driven by Gina (Diane Kruger), who we’ll later learn is a Bosnian refugee.

Due to the horrible weather, the cab skids and goes off a bridge into the river. Gina pulls the unconscious Martin to safety. Cut to a Berlin hospital, where Martin wakes up after spending four days in a coma due to concussion. Martin can’t remember the accident and has lost his i.d., so the hospital staff hasn’t been able to contact anyone to claim him. Martin is very worried that Liz will be frantic about his four-day absence, and the hospital staff is anxious to help, but nobody’s reported a missing American.

However, when Martin remembers the name of his hotel, he signs out against medical advice and rushes to reunite with Liz, who is at a cocktail reception for the medical conference. There’s a big problem: Liz insists she’s never met Martin before, and she’s with another man (Aidan Quinn), who she insists is her husband, Dr. Martin Harris. With no way of proving who he is and already warned that he may have sustained serious damage to his memory, Martin tries to find out why anyone would want to steal his identity – or if he’s delusional and not really Martin Harris at all.

The film presents us with a worthy puzzle, which we try to work out along with Martin. To the great credit of screenwriters Oliver Butcher & Stephen Cornwell, working from Didier van Cauwelaert’s novel, it all pretty much adds up at the end. It’s especially admirable that the film is structured so that viewers can work out the mystery based fairly on the clues and observations provided, but these are subtle enough that we can’t be absolutely certain until our guesses are verified by the narrative – and odds are that plenty of people won’t work it out before Martin does.

Collet-Serra and cinematographer Flavio Labiano revel in the Berlin surroundings, and they also have a ball with the vehicular stunts, which are plentiful and impressively complex. The hand-to-hand stuff provides a greater challenge, as Neeson is so physically imposing that it’s hard to make him look like he’s endangered by smaller opponents, but the actors and filmmakers make it credible that the confused Martin is at a disadvantage.

The dialogue is sometimes a bit too on the nose, but Neeson puts across Martin’s bewilderment, hurt and self-doubt admirably. Jones is fine in a multifaceted role and Kruger is very likable. Bruno Ganz is a standout as an elderly sleuth who still views his days in the East German secret police with pride.

The patter could be snappier, but UNKNOWN has the virtues of a well-constructed mystery married to strong action, and moving like a bat out of hell once the mystery is resolved. Furthermore, we get the rare treat (in English-language films, anyway) of exploring Berlin in Neeson’s appealing company. Altogether, it’s a good deal.