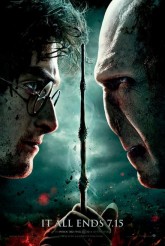 You can tell Warner Bros. feels they have something special on their hands with HARRY POTTER AND THE DEATHLY HALLOWS PART 2 from the very beginning. It’s rare (if not unheard of) for the studio to let a scene, even a short one, precede the WB logo. Anybody who has loved the HARRY POTTER films and/or the J.K. Rowling books they are faithfully based on should be happy as a free-flying dragon with this last movie – anybody who is coming in new to the series at this point is probably going to be totally lost.

PART 2 picks up not long after PART 1 ended, with our hero Harry (Daniel Radcliffe) at the grave of Dobby the Elf. Harry and his fellow young wizard best friends Ron (Rupert Grint) and Hermione (Emma Watson) are trying to find and destroy the horcruxes – hidden pieces of soul – keeping evil wizard Lord Voldemort (Ralph Fiennes) alive. They’d better hurry, because Voldemort and his followers are taking over the magical world, torturing or killing anyone who defies them. Voldemort’s minions are even in control of Harry’s beloved alma mater, the wizarding school Hogwarts. Not coincidentally, Harry’s quest leads him back to Hogwarts, and he learns that he and Voldemort are bound together by more than either imagined.

Even if one knows what is coming, director David Yates makes it all wonderful to watch. Battle scenes are thrilling, and details – like the magical equivalent of disturbed moths in a library – come alive in seemingly every corner. Big spells that have an effect of large areas have visual heft and are imaginatively conceived and executed, while elements like a fleeting patronus are handled with delicacy.

Screenwriter Steve Kloves has taken a few liberties with the text – the outcome is the same in nearly all instances, but who does what has been juggled a bit and certain characters get a little more focus than others. It’s a pleasure to see Matthew Lewis’ loyal Neville Longbottom get to show a heroic, intelligent side (especially since the character got so sidelined in the film adaptation of HARRY POTTER AND THE HALF-BLOOD PRINCE) and Ciaran Hinds makes a strong impression as a character we’ve heard about but not seen previously.

What’s really wonderful about the screenplay and direction, though, are how they take what could be scenes of flashback exposition and make them heart-wrenching. One major character’s back story reportedly has caused some audience members to burst into tears. The sequence is certainly powerful, the more so because it has a moral complexity that has been completely earned, but nevertheless may surprise people who stubbornly think of the whole HARRY POTTER series as children’s fare.

Radcliffe is wonderfully weary, gritty and resilient as Harry, with Grint and Watson providing stalwart support. Fiennes gives Voldemort a sense of vulnerability and even humor along with the icy menace we have come to know.  Evanna Lynch is once again superbly ethereal as the odd Luna Lovegood. Alan Rickman gets to be entirely gripping as Snape.

Rowling’s novel of HARRY POTTER AND THE DEATHLY HALLOWS was enormous, and even broken into two films, there simply isn’t room for everything. Director Yates and screenwriter Kloves have opted for a breakneck pace that leaves out a lot of grace notes, and some of the ones that are included won’t register on people who aren’t paying careful attention. However, the mood and message of Rowling’s work is maintained, and the film – and the series – end on the beautifully gentle note of the novel. The final shot, though, belongs to the film and its actors. To those who have loved this journey throughout, it seems a perfect last look at this magical world with a human heart.

Click on link: Fox  AX’s Review of HARRY POTTER AND THE  ORDER OF THE PHOENIX – ULTIMATE COLLECTION Blu-ray