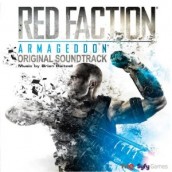 Of all the alt. tech composers who are giving sonic flesh to the ghosts in their machines, Brian Reitzell is certainly one of the most intriguing. Shaping guitars to the dusty football plains of Texas in FRIDAY NIGHT LIGHTS or mutating their chords into the terrifying mayhem of 30 DAYS OF NIGHT, Reitzell has also heard the existential funk of STRANGER THAN FICTION before finding fairy tale eeriness in the MTV generation reboot of RED RIDING HOOD.

If Reitzell’s interests have often pushed the boundaries between sound design and music, they now reach surreal meltdown with the videogame soundtrack to RED FACTION: ARMAGEDDON, his worthy contribution to a franchise that finds you blasting away on the soil of mars- or in this case under it, as a new apocalyptic wave of aliens threaten to overwhelm our fearless settlers. It’s all well and good to play thrashing rhythms to hit all of the destructive fun, which Reitzell certainly does here in style.

Even more interesting than the laser-blasting goods is FACTION’s piercing, crystalline sound, as derived from Reitzell’s seemingly infinite layers of synths and samples. Like some gearhead time traveler, Reitzell’s plugged into a true, cutting edge “sci-fi” vibe that makes the pulsating RED FACTION album sound like neo-music, as beamed in from two hundred years hence for a 21st century shooter that can only imagine the future.