The series continues to defy odds by either utterly bad or in the case of this week, quite good 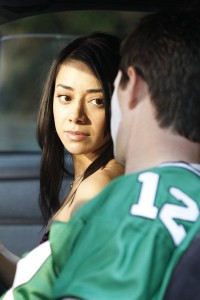 I’ve given up on trying to figure out what the hell is going on with LOVE BITES. One week it’s horrendously bad, the next week it’s quite good. The tone has varied, the stories are all of the place, yet, some times it gets everything right.

This week, with “Boys to Men”, the series almost feels like the writers have finally broken completely out of their shells and found clever ways of truly connecting all the stories and characters in a way the series hasn’t quite done up until this point.

The three segments, as the title implies, is about three different men, or rather men who haven’t grown up, learning to develop past their childish ways and truly become the men they refuse (or refused) to become.

“Ben & Marissa” features Ben (Skylar Astin), the nephew of regular cast member Colleen (Constance Zimmer) who is set to housesit for his aunt and her husband Judd (Greg Grunberg) over the weekend.

The problem with Ben is he’s still attached to his ex-girlfriend Gwendy. In fact, you could say that’s he’s obsessed. However, things change for him when Colleen’s boozy friend Marissa (Rebecca Creskoff) shows up to crash at her place after she leaves her husband once again. 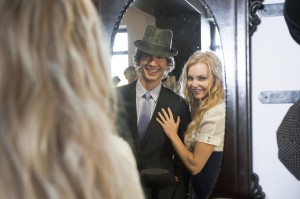 Soon, Marissa finds herself attracted to this man-boy, and a one-night stand opens up Ben’s world to the fact that he’s “clingy” and he needs to put things in perspective.

The segment is very well-written, and sadly, very real. Solid writing eschewing standard cliches for something that is actually quite cute and affecting.

Segment 2 follows a different one night stand of  “Steffi & Tommy”. Steffi (Aimee Garcia) and Tommy (Ian Reed Kessler) are complete polar opposites and after a night of great sex, they realize they’re very incompatible. However, Steffi gets a call that her dad just had a heart attack and she desperately needs to get to the hospital because she has no car – and Tommy obliges. It’s during this whirlwind day where we see the somewhat stuck-up Steffi learn that she’s vulnerable, and Tommy, who never says the right thing and is a bit of douche, realize he can actually be a human being.

This is a very atypical story that takes some sweet detours, without sugarcoating things and both Garcia and Kessler are hilarious to watch. They get a chance to create two very distinct sides of these very well-rounded characters.

Segment 3, “Dale and Audrey: is another winner as Dale (Chris Gorham), awaiting the birth of his daughter, innocently (or not so innocently) flirts with the hot French secretary Audrey (Izabella Miko) and finds himself gettting sucked further and further into her deranged little world until he realizes what matters most to him. 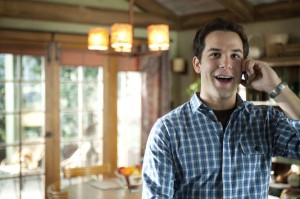 Again, this story could have gone the very cliched route, but it’s peppered with some wonderfully absurd detours. There are two moments where Dale fantasies he’s in some odd French movie with the secretary and it really gives the show a different feel.

However, the best part of this segment is the final pay-off which reveals that Dale’s wife is not pregnant – it’s actually his wife’s sister Annie (Becki Newton) who is having the baby for them. And Annie is the other recurring character on LOVE BITES.

It’s a nice way to inter-connect everything we’ve seen up to this point with the three regular characters – and it’s cool to see some mythology element gets passed down episode to episode into what’s largely an anthology series.

I think what clinched the writing and directing in this episode is the little scene at the end where Annie starts to feel some loss for giving up the maybe she carried for nine months. It’s an honest moment, expertly handled by Newton.

It also hints at the greater potential LOVE BITES could have had if it lasted longer than just this one season.

LOVE BITES is not a perfect show, but when it’s good, it’s actually quite good, with this week proving NBC actually has a pretty original series on their hands even though it’s been given the mercy killing of airing in the summer after not making the cut during the network’s Spring line-up. It’s a shame, since it’s a perfect for the short-attention span summer TV-goers have – and when it succeeds, it cam be surprisingly good.