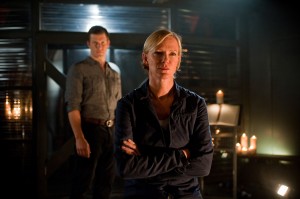 In OUTCASTS, airing its season finale tonight on BBCA at 9 PM, Liam Cunningham’s President Tate is theoretically in charge of the human colony on the distant world Carpathia. However, his authority and intentions are frequently challenged by wealthy newcomer Julius Berger, played by Eric Mabius.

Born in Pennsylvania and raised in Massachusetts, Mabius has a mass of film and television credits (including the original RESIDENT EVIL and THE L WORD), but he is perhaps best known to most people for his lead role as Daniel Meade, the hedonistic but good-hearted boss of the title character on four seasons of UGLY BETTY.

ASSIGNMENT X: When UGLY BETTY ended, were you expecting it to end?

ERIC MABIUS: Well, obviously, by the time we finished the show, we knew it was going to come to a close, but no, I don’t think anyone expected it to come to a close. I’m always trying to be very tactful in answering a question like this, but we were all devastated and I think every single person felt we had at least one more season of really good storytelling left in us, including [creator/show runner] Silvio Horta and everyone from [fellow actors] America [Ferrara] to Marc [Urie]. It was really hard. I was doing some interviews and someone asked me about that and I actually got genuinely and honestly choked up. It’s hard. It’s the closest I’ve ever been to a cast in my life. I felt it was just a wonderful thing to be a part of something that really moved people. You can’t say that very often.

AX: Did the way that UGLY BETTY ended make you think on any level, “Hmm, maybe I should try to work for the BBC next?”

MABIUS: No, it made me think, “Hmm, maybe I should become a gentleman farmer.”

AX: So how did you wind up working on OUTCASTS for the BBC in South Africa?

MABIUS: Bharat Nalluri directed the first two episodes of OUTCASTS. I’d worked with him before, and my agent called me and said, “There’s a show that’s starting up the BBC is doing and Bharat’s directing.” As soon as I heard that, I said, “I’d love to read it, please let me know what’s going on,” and I loved the script, and Bharat found out that I was available and I was all over at that point. I got that call when I was still finishing UGLY BETTY in London. So within a week or so, it was all done, and in two weeks or so, I was in South Africa with the family.

MABIUS:  Absolutely an adventure. I didn’t have many preconceptions going into the experience, because it happened so quickly, but I think that really served us in the end, because we made some friends that we know we’re going to keep in touch with for long periods of time. It’s really nice to get out of the Hollywood paradigm for awhile just to get some perspective and let go of some stuff, clean the palate. It was a way to sort of mourn the loss of the [UGLY BETTY] TV family that I had gained. The schedule was much easier than what I’m used to from UGLY BETTY. I’m actually getting to reconnect with the family in an incredible way – my real [off-screen] family. 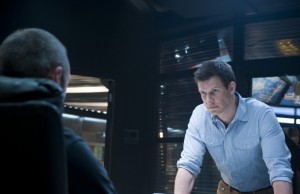 AX: Would you say your OUTCASTS character Julius is actively villainous, or is he more just trying to arrange things the way he thinks they should be and stepping on other people’s toes as he does this?

MABIUS: Definitely the latter, absolutely. I think he firmly believes in what he’s doing and I know he is trying to make this new world a better place and he has a lot of problems with the way that the president is going about things, and he’s really asking for agreement from the president and doesn’t really find it, and it’s just a great, delicious, intelligent character to play.

MABIUS: He’s thought fifty moves ahead of time on the chessboard of life. It’s a great thing – he can turn any sort of adverse situation to his advantage. He takes things in stride a little bit like I wish I could more in life. He’s not surprised by anything, because he’s sort of figured all possibilities to that extent. 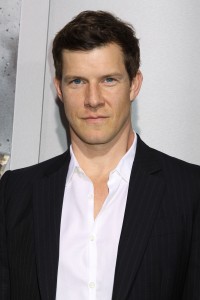 AX: After playing somebody comparatively malleable for that amount of time, was it a challenge or was it fun or was it both to play somebody who has a much more forceful viewpoint?

MABIUS: He [Julius] doesn’t really display that forceful viewpoint. He’s in some ways as malleable as Daniel was. He’s much more infectious and much more overtly charming.

AX: Were there particularly exciting aspects to working in South Africa?

MABIUS: We [Mabius and his family] made friends. Five minutes from where we lived, they had a farm where you could go and walk right up and there are zebras and wildebeests and springboks and ostriches, and it’s right there. Even in this valley an hour outside of Cape Town, it used to be until the late 1800s completely overrun with elephants. I’m having definite culture shock being in L.A. I really am. It’s like going from Pluto to Earth, all in one fell swoop. The rugged landscape there [in South Africa] and the sort of adversity that exists there, compared to this environment of plenty is kind of odd is. Adding the atmosphere of loopy jet lag added to this sort of dreamy world is a little strange.