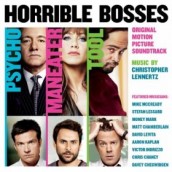 Whether you’re a suave con artist, a trash-talking teen, or a harassed member of the man cave, there’s no better way to strut your stuff than with balls-out music- whether the stylings are the retro Vegas swing of OCEANS 11, SUPERBAD’s 70’s Motown funk or the blues rock of HORRIBLE BOSSES.

Where that film’s composer may have played it cleverly cute for HOP’s Easter bunny in his last comedy score, it’s all about R-rated rhythmic raunch for BOSSES. With a grooving dream team consisting of such musicians as The Dave Matthews Band’s Stefan Lessard, Pearl Jam’s Mike McCready and frequent Beastie Boys collaborator Money Mark, Lennertz brings on the sneaky strumming and raucous guitars that are the perfect accompaniments for poking about your scum overlord’s cocaine-festooned joint, or engaging in a manic car chase with a psychopathic narcissist.

Then, there’s just something naturally funny about hearing a keyboard groove, beat box scratching blues brass and screaming rock chords over a bunch of dudes making dick jokes. Though a subtle orchestra’s along to give the score some sense of control, complete anarchy eventually takes over the BOSSES album with some great, extended improvs of badass behavior. Extra bonus points for the most hilariously unprintable album cue titles in movie score history.

AGREE? DISAGREE? LET YOUR VOICE BE HEARD – COMMENT BELOW
Click on link: To buy the Horrible Bosses soundtrack