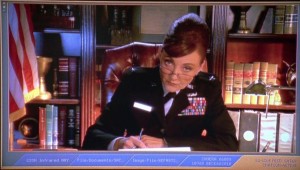 In Part Two of our exclusive interview with actress Bonita Friedericy, she tells us more about playing General Beckman on CHUCK, plus when she realized the show had a cult following and her other recent projects.

ASSIGNMENT X: Beckman does show up in person occasionally, but most of the time, she interacts with Chuck et al over a computer monitor …

BONITA FRIEDERICY: I’m playing a part that actually is pretty much on a monitor. I’m always either on a video camera or it’s floating away from me onto the reactions of others, which I find extremely amusing. This is the way a Beckman scene basically works. It’s a long-distance shot of me on a monitor, talking and you see the back of everyone. And it zooms up close and then it sort of goes to everybody else while I continue to talk, and then eventually it comes back to me. So most of the filming is about two, three, four hours of other people, with me just standing with the camera guys, throwing my lines out. So I actually have gotten very fond of the camera crew. I’m usually crammed behind them, under their armpits or in weird locations, trying not to get run over.

AX: When the other characters are looking at Beckman on the monitor, how is that done?

FRIEDERICY: It depends. There is a flexibility to Beckman that I think is like no other thing. For instance, there was an episode in Season Three where they were running out of time, it was very late at night, and they were shooting scenes with [Chuck’s dad] Steven J. Bartowski, played by my dear friend Scott Bakula. Someone had the fantastic idea, because my desk floats around, my desk was sort of in the same area, when they were trying to do the turnaround and light it for the turnaround on Scott, was just to shoot all of my stuff. There was nobody else there, so if I had three scenes where I just [give expository speeches], we’ll just do them back to back to back, and a stand-in will just say the [other characters’] lines.

When we have time, I work with the other actors, and generally speaking, what happens is, we shoot all of their stuff and then I go run over and I sit at my desk and they shoot my stuff. If you’re seeing it from behind them and I’m on the screen, I’m on the screen. In Season Two, two [crew] guys figured out on hiatus how to rig a camera, so that when it’s “Beckman Live,” I run over and I sit at my desk and I actually come up on [the other characters’] screen. I can see them – I have a little teeny video [monitor] – but I have to look down the barrel of the camera. It helps out the timing – we had a lot of trouble the first season, because they would tape my stuff and then they would put it up later [on the monitor for the other actors], but I would have run my lines and given pauses based on a stand-in on the second a.d. reading their lines, and often it wouldn’t give anybody time to actually grunt or do their stuff. I never could really act [the correct timing], because I had no idea what they were doing.

AX: When Beckman stops delivering exposition and they give her something else to do, is the character who you thought she was going to be?

FRIEDERICY: That’s a really good question, because it’s really hard. I had to admit, because I actually worked on it [laughs], I used my theatrical training and I actually sat down and I still have it written down somewhere that the thorn in Beckman’s side is Roan Montgomery [played by John Larroquette]. No matter what, throughout the ages, she just has this thing for this guy, and it just pisses her off more than anything that somebody actually got under her skin. [It has] been a little bit of a challenge for me, learning the text and all this [exposition] that she has to say well enough that I can play with it, that I can make it feel like it’s a human being who has an opinion about these strange things that she’s saying at the same time as rattling it off. But other than sort of being annoyed at people most of the time, it’s hard to know what would motivate her, and I have to say, she’s turned out to be a lot softer than I imagined.

I liked her for the fact that she’s got a really good heart and that she’s practical. She’s extraordinarily pragmatic, and that was one of the most fun things about shooting that rocket launcher, is that no matter what [laughs], although she may actually kill this guy [Roan] at the same time, she doesn’t know a better way of rescuing him and so basically, it’s down to business. She is fully capable of nuking a fortress and perhaps killing the man she loves in an effort to save him, because that’s what’s required. I thought that was quite interesting. And I discovered that I didn’t want to push it at all, I didn’t want to push the comedy and I didn’t want to push her. I actually wanted her to just be a person in the few scenes where she relaxes a little bit.

AX: When did you realize CHUCK was becoming a cult hit?

FRIEDERICY: I realized it right away. I clearly remember at a table read saying to Josh Schwartz that I had gone [as a guest] to a convention with my husband [John Billingsley], because John was on STAR TREK: ENTERPRISE [as series regular Dr. Phlox], and so we go to STAR TREK conventions, and I was at a STAR TREK convention, and I realized that there was a lot of crossover and there were a ton of rabid CHUCK fans. I told them that CHUCK had a lot of rather strong fan base and that proved to be true. I guess we think it’s a cult hit now.

AX: Well, you had a bunch of people run out and eat Subway sandwiches on the show’s behalf in a renewal campaign …

FRIEDERICY: That’s true. I felt Zack [Levi] did a wonderful job with rallying [the fans] as well. I’m quite fond of Zack. Actually, I’m really fond of everybody. It’s a fun show to work on. It’s a nice group of people.

AX: Have you done any other acting jobs during CHUCK?

FRIEDERICY: I was in a play called FUTURA, in which I did a thirty-five-minute lecture on typography, and then was kidnapped and hijinks ensued. I was in ALIEN RAIDERS Interestingly, Bob Altman [son of the late Robert Altman], who is the camera operator on CHUCK, was a camera operator on ALIEN RAIDERS as well. We’ve talked about that, because I played a drug-addled alien spotter in it. That was about two years ago. I did an episode of PARKS AND RECREATION during that, I worked on THE STARTER WIFE, I did MY NAME IS EARL – I had fake buck teeth, I played an Amish woman. But since FUTURA, I haven’t done anything. It’s kind of hard, because I am now a series regular this season, and I am now contractually bound.

AX: Although you’ve been on CHUCK since the beginning, you were just made a series regular at the beginning of Season Four. Apart from the paycheck, has that changed anything?

FRIEDERICY: I’ve never been a series regular before. I’m delighted. [joking] People call me queen now. I’m now Queen Friedericy. That was nice. You can have a title once you’re a series regular. The prop guys made me a chair back with my name in Season Two. Actually, I think Mekenna [Melvin], who’s playing [Casey’s daughter/Morgan’s girlfriend] Alex, I think they made a chair for her, too. Everybody is made to feel very welcome on CHUCK.

AX: How do you feel about the Season Five renewal?

FRIEDERICY: I think everyone involved in the show – production, cast, crew, the fans – has done, in the words of Devin Woodcomb [aka Captain Awesome, Chuck’s brother-in-law, played by Ryan McPartlin] an awesome job at keeping this show going. I’m very proud to be a part of it. “Good work, team” – that’s me doing an impression of me playing General Beckman.

One of the things that I am very pleased to note is that it’s a show that I think balances tonally. It’s something that I’m not sure a lot of shows have ever been able to do, which is dramedy. It’s a spy, action-packed show, but it’s also kind of a family, relationship-type show, and it’s funny and it’s serious. And if people could watch some of the actors at work, they do such fine-tuned work. Watching Zack and Yvonne do scenes where they’re weeping because they have to part, they do those over and over and over again, and they’re completely committed to what they’re doing. It’s a really hard-working group of people. I’m very happy to be a part of it. And I do actually like being a kickass general. I think it’s a great role model for women.