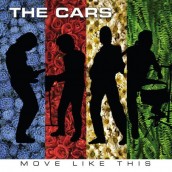 The music The Cars produced in their late ‘70s and 1980s run was unparalleled. From the New Wave textures of “Shake It Up” and “My Best Friend’s Girl” to the non-stop hit-palooza of 1984’s HEARTBEAT CITY that featured a long string of hits including “Magic,” “You Might Think,” and “Drive.”

However, after 1987’s incredibly disappointing DOOR TO DOOR album, the band decided to call it quits and leave its legacy at six studio albums.

Over the years, frontman Ric Ocasek released a steady stream of solo records, with most of them containing at least one or two good songs apiece, but never reaching the accelerated heights of his former band.

Now, after 24 years, the band has regrouped with all surviving members (bassist and occasional singer Benjamin Orr passed away in 2000 of cancer) and have delivered the exceptional MOVE LIKE THIS.

Oddly enough, this is the album they should have made after HEARTBEAT CITY and it’s fueled by futuristic keyboard flourishes, angry guitar crunches and Ocasek’s New Wavish vocals.

At ten tracks, it’s an efficient little set with no filler. Iconic sounds such as the heavily processed hand claps return for another go-around and Ocasek’s bandmates Greg Hawkes (keyboards, bass), Elliot Easton (guitar) and David Robinson (drums) clearly bring a lot to the table to Ocasek’s songs.

If you download the demo of “Blue Tip” off of iTunes or purchase the Best Buy exclusive featuring a demo of “Hits Me,” you can hear how the songs are literally transformed into a whole other animal when the group dynamic is put into play (the “Blue Tip” demo almost sounds reggae compared to the techno-beats on the finished album cut).

Many times, singer-songwriters don’t realize what the group mentality brings to the music, and that’s the case here with The Cars. While Ocasek was the primary songwriter, his tunes only get better when they go through the band process.

Production on the ten tracks are split evenly between The Cars and Jackknife Lee.

The standout tracks are “Too Late,” an infectious little number about hanging on to love – “you say it’s too late/all the storms in life/you have to contemplate” while “Sad Song” ranks up as one of the band’s best since “Magic” and “You Might Think.”

“Sad Song” has that crunchy processed guitar that kicks the track off and brings out their trademark sound. There are more layers though to the catchy tune and it’s a perfect lead-off single from the album.

In the past, Orr would trade-off with Ocasek in singing songs, but Ocasek sings all ten tunes. On softer songs like “Soon” and “Take Another Look”, you can almost hear Orr in Ocasek’s vocals. They’re nice songs too, which is a plus. The softer tunes Ocasek writes can often get a little too syrupy, but the band reigns them in and keeps them in synch with the other textures of the disc.

“Keep on Knocking” is a pretty aggressive rocker, while “Blue Tip” kicks off the disc with some great quirky, oddball Ocasek lines like “keep your hat on backwards/keep your lips tucked in/the world is full of quackers/and bellybutton rings.”

The set concludes with the strong “Hits Me” that wraps the album up in a nice little bow. The lyrics include “It hits me/I gotta just get through it/and I’ll be fine”. Even though the song is about changing times, those lyrics could almost be about Ocasek’s reluctance over the years to regroup with his bandmates. So it’s wonderful that it finally hit him that it was time to revisit The Cars.

While most 1970s and 1980s bands that regroup sound as if they’re treading water and desperately clinging to their former glories, The Cars sound absolutely reinvigorated. They were a band that was always ahead of their time anyway – and their hits sound as fresh as they did when they were first released. That’s why MOVE LIKE THIS sounds so good and holds up alongside their best albums.