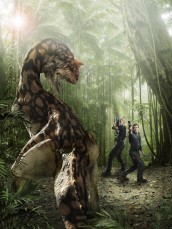 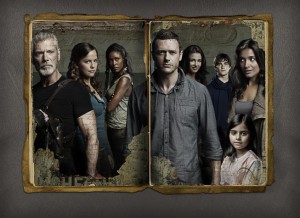 In TERRA NOVA the Fox television series, which has its two-hour season finale tonight at 8 PM, a group of colonists have set up a colony 85 million years in the past to save their own lives – despite the dangers from dinosaurs and the like – and perhaps save the future. On TERRA NOVA the production, the producers have set up a team in Australia to shoot the show, which is several thousand miles and multiple time zones away from the series’ Hollywood home base.

Bridging the gap between these is producing director Jon Cassar, who spent many years working for Fox in a similar capacity on 24, working there with one of TERRA NOVA’s executive producers, show runner Brannon Braga. Cassar talks about making sure the prehistoric piece gets made in the right tone and in the right amount of time.

ASSIGNMENT X: Were you always going to be the producing director on TERRA NOVA, or did you come in after the pilot?

AX: Did the two of you discuss how the TERRA NOVA pilot would go?

CASSAR: Not really. I was doing THE KENNEDYS, he was doing his thing. He had lots of opinions from a lot of people. He didn’t need one more from me.

AX: Were the opinions given to Alex Graves as the pilot director then passed along to you for the sake of consistency?

CASSAR: Yeah, partly, but also, you [as a director] can take it off of what was done, and then we did some reshooting of the pilot, so I was involved in all that part of it. Once the pilot was shot, I was involved early after that.

AX: Does having Steven Spielberg involved in the project as one of the executive producers make a difference in the day to day end that you’re on? Is there an added impact of some sort?

CASSAR: Only from having another producer’s eyes on it. That’s going to affect your day to day, basically, so it’s like saying [executive producer] Rene’s [Echevarria] input or Brannon’s input – it’s the the same thing. His input is just as equal to all of those guys.

AX: You worked with a lot of these guys before on 24, so is that how you came together again on TERRA NOVA?

CASSAR: Yeah. I mean, it’s all about working with the same people as often as you can. There’s a shorthand, we all understand what each person wants, so having those guys there already in place – that’s why I took the job. I took the job because I knew I’d be working with that same family again. They understand me and I understand them, and that’s a big part of it.

AX: How are your lead actors Jason O’Mara and Shelley Conn and Stephen Land to work with?

CASSAR: Oh, unbelievable. I mean, to me, that’s been the highlight of the show. As a director, until that first day with the actors, you never know what they’re going to be like and if they have the same sort of head space as you about putting the show together in the way that you want to put it together. They love the show to be good. Everyone is striving every way to make it good, and that’s all I want in actors. They’re very open to suggestions and come with great ideas. It’s been a real pleasure, it really has.

AX: Coming off of AVATAR, does Stephen Lang’s previous experience with green-screen come in handy?

CASSAR: When you get in that world, he’s very comfortable. He did a lot of it, as you can imagine. We’re not doing those kind of effects [as on AVATAR], but still, we have had cases with him with dinosaurs, and you’ve got to be very clear as to what they’re seeing. The artists together really make great drawings of what these things look like. And I have my iPad right there, and so I can show [the artwork to the actors], and then we put up markers for the height and where the eyes are. We make it the best we can, so we’re looking at something. That’s all you can do, really.

AX: How hard is it making the dinosaurs look real? In 24, there were actually lots of effects, but people know helicopters exist in the present, so we might think a CGI helicopter is real if it looks good enough. People know going in that the dinosaurs are effects …

CASSAR: Well, that’s the biggest challenge on a television budget, there’s no doubt about it. It’s pioneering software that is going to get us to that place [of making dinosaurs look real]. It’s going to be one of those situations that, if this show is successful in putting that kind of CGI out there on a weekly basis, it’s going to affect television, it’s going to affect what’s coming. People are going to look at it and say, “Okay, how are they doing it? That’s how we [will] do it.” So the fact that people are going to look at us and go, “Oh, okay, if they can do it, we can do it, maybe we’ve got a crack at it now.” It’s a new technology – it’s truly pioneering.

AX: You’re sort of filming out in the middle of nowhere –

AX: You’re far away from the enormous production supply chain of Hollywood. Does that factor into how you do your job at all?

CASSAR: Well, sure, of course it does. Because right away, it hampers your communication between here in L.A. [and the production base in Australia]. My job is all about making sure the writers and I are working on the same project. And trying to get the same thing happening in the script, and trying to tell the same story, and so the fact that it’s so hard to communicate back and forth because of the time difference – I mean, people don’t realize, the two offices are open together[simultaneously only] for three hours a day. That’s it. Three hours. Otherwise, they’re sleeping or we’re sleeping. So that’s been the hardest thing for us. That has been the absolute hardest. The fact that we’re away from Hollywood, from a production standpoint – somehow it’s almost good in a way. It’s almost like we’re in our own little Terra Nova [settlement], so it’s kind of interesting. It’s great for the actors, I think. They’re away. They’re supposed to be away. So it’s good.

AX: When other directors are doing their episodes, are you giving them the tone and the look?

CASSAR: Absolutely. That’s my job. Part of what I did on 24 was the exact same thing. I’m the guy that gives them a nice bridge between the writers, who don’t know the director like they know me, and so you give them that bridge to help them talk to the writers, and the writers to talk to the director. You’re the guy in between.

AX: How do you feel that the tone of TERRA NOVA compares with 24?

CASSAR: Tonally, it’s not as dark as 24. [laughs]. I mean, there aren’t a lot of things as dark as 24. But I think in a way, it’s probably going to be on the forefront of a new wave in television that’s going to move away from that darkness. If you just look at LOST, SOPRANOS and 24, those are three pretty dark shows. I mean, these antiheroes – they’re murderers, pretty much [laughs]. We’ve moved away from that, a little bit.

AX: Do you have a fondness for sci-fi?

CASSAR: I do. I don’t have a fondness for fantasy, mind you, but I do have one for sci-fi. They’re two complete different animals. Partly this show is interesting to me because I’m striving, and so are the writers, I think, to keep it grounded in some kind of reality. As crazy as it is that there’s a time fracture, we’ve set it up as a natural thing [that was discovered and is now being used to send travelers into the past]. Someone can build a machine and send people back. It’s about, “There it is, we took advantage of it,” and then once we get there, all the futures we’re dealing with are futures that existed, futures that we think exist. We’re not in the fantasy world. We don’t have fairies flying around. It’s trying to stay grounded in that reality, which I think is very important. A certain amount of audience gets turned off right away the second you get into that world.

AX: Do you have any other projects you’re involved in right now?

CASSAR: There are always projects. FUTUREWORLD is an ongoing one that never ends, we’re constantly working on that, and that’s always happening.