The actor talks working with dinosaurs, the Australian rainy season and the end of LIFE ON MARS 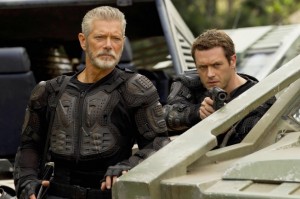 Jason O’Mara stars as ex-cop Jim Shannon in Fox’s TERRA NOVA, which has its two-hour season finale tonight at 8 PM. Jim breaks out of prison in his present, the year 2049, so that he can accompany his surgeon wife (Shelley Conn) and their three children on a one-way journey to Earth’s past 85 million years ago. Terra Nova is the name of the colonists who have come here to escape a fatally polluted world, with the hope of making a new start for themselves and for humanity.

TERRA NOVA isn’t O’Mara’s first acting gig as an American time traveler. The actor, born in Dublin, Ireland – who still speaks with his native lilt when not playing characters from the U.S. – also starred in ABC’s LIFE ON MARS as an NYPD cop who finds himself mysteriously transplanted from the present to 1973. Other credits for the actor include BAND OF BROTHERS, THE AGENCY and the upcoming TO APPOMATTOX. Here he talks about clock-jumping, dinosaur-dodging and playing a dad.

ASSIGNMENT X: Between LIFE ON MARS and TERRA NOVA, do you think there’s something about you as an actor that makes people say, “Oh, we should stick him back in the past”?

JASON O’MARA: I don’t think anybody planned this. I certainly didn’t. I don’t only do time travel shows. I’m always looking for original, thought-provoking shows. I just look for the scripts that capture my imagination the most, and this one happened to be time travel. I actually think in a funny way that time travel is the least interesting aspect of this show. It’s sort of a means to get us to the place where we can tell our story, which is really about a family trying to heal in a frontier town eighty-five million years in the past and trying to create a civilized place.

AZ: How is it playing a parent?

O’MARA: It’s great. I haven’t really done this [before onscreen]. I have my own eight-year-old boy at home, so I’m able to draw from that and it’s kind of a very base, animalistic feeling of protection for your child. Obviously, we’re in an extremely hostile environment – not so much Australia itself [laughs], although there are moments, but these are dangerous times with dinosaurs running around. When you’re kid goes missing, it’s slightly different than when your kid goes missing in today’s world.

AX: As the episodes have progressed, would you say Shannon as a character has developed in any particular direction? Is he becoming braver or more reticent, or a better parent or a more exasperated parent?

O’MARA: I think he is a good parent. I think sometimes he’s quick to anger, which isn’t always a [helpful] quality in a parent, but there’s a lot at stake here. The future of the human race is at stake, life and death is always in the balance. When your teenage son [played by Landon Liboiron] screws up, it’s not just because he took your car – he’s put his life and the lives of many others in danger, so there’s a reason why Jim is hard on him sometimes. So he’s had to discover how to be that kind of parent – he’s also discovered how to spend quality time with his daughter Zoe [Alana Mansour], who he barely knows, it’s about the relationship there. Maddy [Naomi Scott], his middle kid, is at the dating age. Things move faster in Terra Nova, so sometimes boys don’t come just looking for a date. So there’s lots of interesting things to explore. It’s also just a fantastic relationship forming between Jim Shannon and Nathaniel Taylor [the colony commander played by Stephen Lang], which is proving to be a touchstone of the series. We’ve sort of got this relationship where we trust each other fully, yet we don’t trust each other in other areas. So there’s a lot of tension, there’s also a lot of heroism, shared adventures. They’d probably give their lives for each other to protect each other, but there are things they’re holding out on with each other. 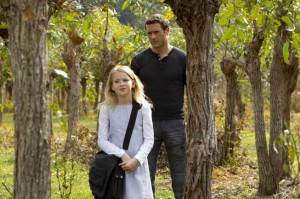 AX: Given Stephen Lang’s extensive acting work with green screen on AVATAR, has he been able to give you any useful advice on working with the CGI?

O’MARA: Absolutely. I mean, we’ve got to make sure we’re looking at the right thing, we’ve got to make sure our reactions are appropriate to what is happening. Things can get really tricky with green screen. You’ve got to keep track of what you’re doing and what’s happening at any given moment, moment to moment. Just with his sheer amount of experience, I rely on that. He’s able to break that down and articulate it for me as an actor, so I find he and the director we’re working with can be invaluable.

AX: Have you done those scenes where a crew member is running around with a tennis ball on a stick, which is standing in for the dinosaur to be added later?

AX: Is that a double whammy of, “How do I act scared and how do I not laugh hysterically?”

O’MARA: You laugh hysterically until they say “Action,” and then you better act your pants off, because important people are watching.

AX: Can you channel the laughter into terror?

AX: From what people have said, it sounds like there were some harrowing real-life physical situations during the filming of the pilot in the wilds of Australia, with flash floods …

O’MARA: There was a moment when the small gully that separated our trailers from the set got flooded and it was a pretty strong river flowing through it and we had to build bridges in order to access it. Other than that, I wasn’t worried. If [the Australian floods of January] had happened a month or two earlier, we wouldn’t be having this conversation, because we wouldn’t have been able to complete the two-hour preview. But I have to say that [pilot director] Alex Graves took all of these extremely complicated elements to make this show, from visual effects, production design, locations, casting – this is a show on an epic scale that hasn’t been attempted on TV, certainly in a long time. And it felt like a very smooth, happy set when we were working on it. There was no drama, there were no moments when we thought, “Oh, my God, we’re never going to complete this.” It was plain sailing.

AX: Has it been a lot easier to make the show once you were out of Australia’s rainy season?

O’MARA: Yes, it has. Being out of the rainy season helps. [Most of TERRA NOVA’s regular episodes were shot during] winter, so it’s like sixty-five, seventy degrees, tropical winter, perfect weather for shooting. The only problem is, it gets dark about four-forty-five, five o’clock, so our shooting days were short in terms of light, but we’d got plenty of stuff we could do on our soundstage without natural light. So yeah, we figured out a way to make the show, which was the big question, whether we could do this week to week, and we’ve proven that we can, so that’s really exciting. It means that if they want twenty-two [episodes] next year, we’re good to go.

AX: Are there things that were learned in the pilot that are somewhat altering the run of the series, where the producers went, “Well, this worked really well, so we’ll have more of that, and we’re having problems with that, so maybe we’ll have less of that”?

O’MARA: Well, there always is, but we’re swinging for the fences here. We’ve got to make everything work. There’s always that in the first year of any show, where you’re trying to play into your strengths and not your weaknesses, and every show, every cast member has certain chemistry with other cast members, certain elements of the story are working while others might not be as much. So you always have other pressures, like you have to shoot the whole [episode] in eight days, you’ve got to get the scripts in on time, so yeah, it’s always a case of trying to make the best show possible on a weekly basis. [It’s] the same challenges that every show has in its first year. Once you’re in a rhythm [of making the show on a weekly basis], it comes a little easier. In the pilot of any show, you’re still trying to feel out the character and make discoveries, but once you’re in series, it comes a little easier, so I’ve really enjoyed discovering who Jim Shannon is and discovering what those relationships are, particularly with his family and with Taylor. So it’s been a journey of discovery, for both the writers discovering what the show is and for me in terms of character, and also trying to figure out what the show is week to week. There are a lot of moving parts to this show.

AX: Were you happy with the way LIFE ON MARS ended?

O’MARA: I was happy. I think a lot of other people out there weren’t [laughs]. I didn’t want it to end.

AX: Given that it had to end, were you happy with the resolution they came up with – your character wakes up on an actual flight to Mars, with both his trip to 1973 and his present-day “real life” both being hallucinations induced during flight stasis?

AX: Besides the upcoming miniseries TO APPOMATTOX, do you have any other projects coming up that we should know about?

O’MARA: Last year, I shot a movie called ONE FOR THE MONEY, starring myself, Katherine Heigl, Daniel Sunjata, John Leguizamo and Debbie Reynolds, based on a series of novels called the Stephanie Plum novels, which are New York Times best sellers. This is the first one of about twenty books, and it premieres January 27, 2012. It’s an exciting project.

O’MARA: Just that it’s not your average TV show. It’s a big show, it’s an ambitious show. We’ve got some pleasant surprises up our sleeve. We’re all really excited.