The showrunner offers advice for writing his favorite TV series 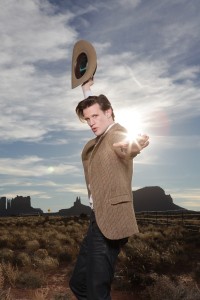 Steven Moffat, who was already on the DOCTOR WHO writing staff, took the reins as DOCTOR WHO show runner and producer in 2010. He brought in Matt Smith as the 11th Doctor and created the character of Amy Pond played by Karen Gillan.

One of Moffat’s most convoluted contributions to WHO has been the character of River Song (Alex Kingston) who is the daughter of a companion and the future lover of The Doctor himself. As the sixth season continues more is uncovered about Rivers’ past and it all ends with a wedding (or at least the finale’s title implies that it does).

With the second half of DOCTOR WHO’s sixth season airing on both BBC and BBC America, Moffat chatted with ASSIGNMENT X about his writing process and working on a show that he truly loves.

ASSIGNMENT X: With the complexities of the River Song storyline currently unfolding on DOCTOR WHO, I have to ask do you plan far ahead with your storylines?

STEVEN MOFFAT: Not really. I think if you did you’d be bored about that idea by the time you got there. I was just telling the writers that this week not too plan too far ahead otherwise they would get bored. I think you have to live in the moment and be responsive to what is happening now. I know DOCTOR WHO is not a reflection of the real world, but it seeps into you in a way. It has to be new. You should always use your newest idea, not your oldest idea. If I had a two year plan I’d be bored by the time I got to the end.

AX: You grew up watching WHO so was there anything you were dying to do when you became the show runner?

MOFFAT: To be honest just to make good DOCTOR WHO. That’s sounds like an evasive answer, but it’s not. I love DOCTOR WHO! I just really want to make good episodes of it. I know what they are and I know how much fun they are. Just that. It’s no exaggeration, and I can prove it, it’s my favorite show. I just want to make really great episodes that I will enjoy watching, and I know what that’s like and needs to be.

AX: You’ve written for a few different Doctors now. Is there any trick?

MOFFAT: No big deal. [Laughs] You end up insensibly and without even thinking about it – you write to the strengths of each actor. There’s been an awful lot of truly stellar performances in DOCTOR WHO, and no one has probably ever really thought of this including me, but it might have had the most amount of amazing star performances of any show ever. We’ve got Matt Smith now, and we write to his Doctor. It’s not hard to do. It’s not difficult. It’s so clear and brilliant and that’s down to Matt. 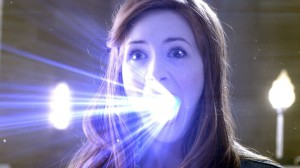 AX: Was it a conscious decision to lighten things up when you started with the 11th Doctor?

MOFFAT: That’s amazing! You’re the first person to say that to me. Everyone keeps telling me how it’s gotten so much darker.

AX: The specials with David Tennant seemed to be a lot heavier emotionally and then when he ‘died’ and regenerated it was so sad and drawn out a bit. I felt that when Matt came on The Doctor reverted to be fun and lighter again.

MOFFAT: I think DOCTOR WHO will always reset to that. It is fundamentally an early evening show. Its fun, it’s charming, and The Doctor is lovely. We will take him to dark places but he will always come back from them. He is not in himself dark. Dark things happen to him, he might have dark thoughts, but he in himself is not dark.

AX: When you created River Song way back in “Silence in the Library” was she always the character that she ended up being?

MOFFAT: Not immediately, but reasonably quickly. I came up with a possible way that could happen. The daughter of a companion that The Doctor feels responsible for, that could work! So when Amy came on I did make a link between the names. That was just plan A really. I couldn’t know how long Karen (Gillan) would stay with the show and whether Alex (Kingston) would come back. It was just an idea that I kept operational, until I got it worked out.