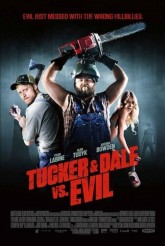 TUCKER & DALE VS. EVIL is an oddity. We can conceptually appreciate its plentiful jokes as they fly past, yet we don’t find ourselves laughing much. It’s not that the movie is unfunny in that awful way of comedies that fall flat, it’s just that, despite all the extreme gore, its quizzical tone doesn’t match the outrageousness it aims for but seldom achieves.

Unless one avoids the genre altogether, it’s just about impossible to not see some of the approximately five million horror movies in which a bunch of college kids go into the woods and are terrorized by crazed, chainsaw-wielding hillbillies. In TUCKER & DALE VS. EVIL, two perfectly decent hillbillies, best friends Tucker (Alan Tudyk) and Dale (Tyler Labine), find themselves terrorized by a band of college kids after a colossal misunderstanding that gets worse and worse with every incident. Minus the aquatic critters, this is almost a direct parody of the recent SHARK NIGHT, although TUCKER & DALE was made earlier than the other film.

Director Eli Craig and his co-writer Morgan Jurgenson have come up with a lot of very funny, inventive ways for the various visitors to the woods to inadvertently off themselves while making it look as though Tucker and Dale are attacking them. Another bonus is the ability of Labine and Tudyk to fully commit to what they’re doing – we believe Dale and Tucker are genuinely nice and genuinely just a bit dim, so that they are distressed and puzzled by the actions of what they conclude are a bunch of suicidal students.

In theory, this is great, especially if one has seen a lot of the sort of fare being sent up here. In execution, however, TUCKER & DALE is a bit uneven. There has been a deliberate choice made to play down some of the outrageous moments, and sometimes the naturalistic aspects make a good contrast with the general lunacy, but sometimes relative subtlety defeats the purpose. There is a strain of old-time Peter Jackson DEADALIVE/Sam Raimi EVIL DEAD mania underlying the proceedings, and there are places where it seems like it would have been better if Craig had just let rip instead of going for restraint.

Still, TUCKER & DALE VS. EVIL is worth seeing for its performances, for its consistent ability to produce deaths that can be seen in several entirely different ways and for its droll commentary on horror movies that rely on unmotivated aggression.