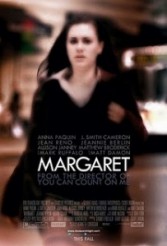 A movie about ideas that remains interesting, even as it is sometimes a bit didactic and stagy

Seventeen-year-olds tend to act without thinking often. But what if an action may have catastrophic, irrevocable consequences? How to take responsibility for this without wrecking the lives of everyone in sight? This is a tough issue even for adults – for high school student Lisa Cohen (Anna Paquin), it’s practically unbearable.

In MARGARET, the trouble starts when Lisa, a Manhattan dweller, tries to prepare for a summer vacation with her West Coast dad. Seeking a cowboy hat, she spots one on the head of bus driver Maretti (Mark Ruffalo). Lisa waves and points, Maretti waves and points back – and runs a red light, hitting pedestrian Monica Patterson (Allison Janney). Lisa holds Monica’s hand for the several minutes it takes the woman to die on the ground of her injuries. Traumatized and afraid of incriminating herself, Lisa at first lies to the police and says the light was green when the bus started through it. Then she starts feeling overwhelmed with guilt. At home, Lisa lashes out at her Broadway actress mother Joan (J. Smith-Cameron), who takes Lisa’s miserable behavior personally, At school, Lisa clashes with a Syrian classmate (Hina Abdullah) over Muslim-Jewish relations and the roots of 9/11. After school, Lisa tries casual sex as a means of defining herself. She also tries talking to Maretti, but he doesn’t want to hear anything Lisa has to say about the accident. Lisa then tells the truth to the police, but they want none of it, either. Lisa finally tracks down Monica’s best friend Emily (Jeannie Berlin), who on the one hand is glad that someone else cares about pressing a case against the bus driver, and on the other hand has some strong views about Lisa’s motives.

Director/writer Kenneth Lonergan has a lot of good insights into human behavior, and his illustration of how histrionic an upset adolescent can be is not an overstatement (depending of course on the adolescent in question). However, despite the vulnerability Paquin brings to the character, Lisa is so angry, loud, self-righteous and self-blind for so long that being in her company for the film’s running time (almost two-and-a-half hours) becomes something of a strain. That may well be part of the point, but it’s still abrasive. Furthermore, Lonergan’s efforts to get his various themes don’t coalesce into a cohesive whole. Lisa’s questions about her own culpability, mothers and daughters, Jewish reaction to casually expressed anti-Semitism, anxious teen sexuality, even the poem that gives the film its title all have sharp observations within, but they don’t add up to more than the sum of their parts when it seems like this was the intention.

The other issue here is one of style. Lonergan is so intent on giving his actors room to explore and his thoughts time to catch hold that he doesn’t make MARGARET especially cinematic. The bus accident sequence aside, the pacing and action are more reminiscent of stage than film. A few shots also raise questions about when the movie was made – Paquin and Ruffalo’s relative youth aside, we see a cinema marquee advertising 2005’s SERENITY.

Smith-Cameron is excellent as a woman who wants to be a good mother but who is also girlishly caught up in her own issues. Berlin is superb as the epitome of a certain kind of New York intellectual as Emily. Matt Damon and Matthew Broderick make strong contributions as two very different high school teachers and Jean Reno plays Joan’s new boyfriend with equal parts charm and blithe arrogance. Jonathan Hadary gives a very shrewd performance as an avuncular lawyer.

MARGARET has some intriguing ideas that don’t often get dramatized in this fashion, and it has a fine cast bringing it to life. Still, like its young protagonist, sometimes it comes off as a bit too self-righteous and self-involved.