DANCING WITH THE STARS Recap: “Psycho” Mike Catherwood is the first eliminated in Season 12 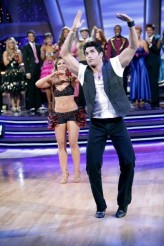 DANCING WITH THE STARS Recap: “Psycho” Mike Catherwood is the first eliminated in Season 12

No surprise, he had the lowest scores for the first two weeks in the competition. Plus, shocker - Chris Brown not boo'd.

For the twelfth season premiere results show, DANCING WITH THE STARS has been much better.

The opening number with six new dancers dubbed the “DANCING WITH THE STARS” Dance Troupe was a bit baffling. Who are these people? There was no mention as to what they were exactly going to be doing throughout the season except host Tom Bergeron said they would be popping up every results show to perform. Why? Don’t they have enough pro dancers? Are they losing some? Where are the pros who aren’t in the show this season such as Jonathan Roberts and Alec Mazo among others? It sounds like some pros are not coming back. Derek Hough, absent this season, may be following in his sister Julianne’s footsteps and going on to bigger and better things. Who knows? At any rate, it doesn’t seem necessary to bring in more pros when we already enjoy the ones we have had for the last six years Something’s up. 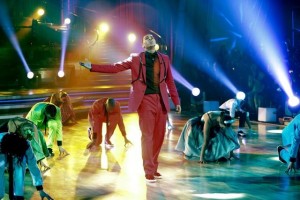 After some recapping from the night before Chris Brown performed to a lukewarm audience. Let’s face it it’s hard to watch him objectively when all you can think about is “this guy has some serious anger issues”. The audiences’ response to the controversial singer was tepid and polite.

Then came a video segment on the new DWTS dancers. Ho-hum, oh good, 90 seconds later it’s done. A fun segment about how the 11 couples are getting along followed before Brown was up on stage again lip syncing, at least that’s how it looked to me, an old Brown favorite song as Bergeron called it. Again the audience was cordial. Perhaps they were warned. Or maybe they feared a chair might be thrown across the room at them. The evening ended without incident and nobody asked Brown about Rhianna (at least not on camera). And luckily no windows were hurt in the filming of DWTS: THE RESULTS SHOW.

In the end, the only one shattered was Mike Catherwood, who was the first to be be eliminated in season 12. He didn’t seem surprised nor did his partner Lacey Schwimmer, who made it all the way to second place last season with her partner Kyle Massey.

It’s too early to say who is headed to the finals, but rest assured it’s the tightest competition ever this season. And even though there are favorites already pegged (Ralph Macchio and Kirstie Alley) that mirrored ball is still available to at least a half a dozen couples. So, onto week three and 10 couples vying for that coveted gaudy ball trophy.