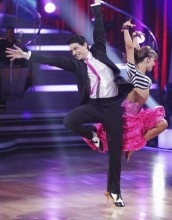 Ralph Macchio and Kirstie Alley are still tops in Week 2

They listened! They actually listened to what the judges had to tell them last week on DANCING WITH THE STARS. And the result – much improvement! Many celebs upped their game this week, making it a much closer competition than last week.

Top scorer last week Ralph Macchio held his title this week by a thread. Wrestler Chris Jericho made some serious moves on Macchio’s lead with an impressive score this evening totaling his two week tally to a cool 42, tying with Romeo for fourth place. Fan favorite Kirstie Alley held her own landing in third place with 43. While Hines Ward nipped at the heels of Macchio with a total of 44 points, just one point shy of Macchio’s first place score of 45.

It’s a very tight race to stay on top. Macchio did not wow the judges like expected this week and instead he was solid but not gold. He needs to up his D-game because they are coming after the karate kid with feet a blazing!

Chelsea Kane (Disney Channel Star) and her partner Mark Ballas
She has a naturalness to her dancing. There is no question of that. She is flexible and she is cute but she withholds her everything, which the judges keep encouraging her to let out. Carrie Ann Inaba commented on Chelsea’s potential and Bruno Tonioli loved the weirdness to her and partner Ballas’ Jive, but Len Goodman did not like the mime and doll act and all the messing about.
Scores: Inaba – 6, Goodman – 5, Tonioli –7 Harland – 7

Wendy Williams (Syndicated Talk Show Host) and her partner Tony Dovolani
She has improved, no question. She let out what she was holding back last week but like long legs are a detriment to the Jive, well, a big bosom is a noticeable detriment to the Quickstep. Goodman thought there wasn’t enough dance moves. Inaba said she could tell that Williams was having a good time. Tonioli thought the dance was a step in the right direction.
Scores: Inaba – 6, Goodman – 5, Tonioli – 6, Harland – 6

Hines Ward (Football Star) and his partner Kym Johnson
He is good. He has gotten even better, but he is vanilla. He lacks the charisma that Macchio, Alley and even Romeo bring to the dance floor. However, Inaba loved his Quickstep. Tonioli proclaimed Ward to be a full time dancer! Goodman, too, was impressed, telling Ward he has good movement.
Scores: Inaba – 7, Goodman – 7, Tonioli – 8, Harland – 7

Petra Nemcova (Supermodel) and her partner Dmitry Chaplin
This is a prime example of why tall people aren’t good Jive dancers. As Goodman has said in the past, the Jive is very difficult to do if you are long limbed. Nemcova proved that tonight. Tonioli thought working on Nemcova’s strength might help. Inaba thought her legs looked beautiful. Goodman liked the short skirt and long legs but commented on the bad technique.
Scores: Inaba – 6, Goodman –6, Tonioli – 6 Harland – 6

Romeo (rapper/actor) and his partner Chelsie Hightower
He’s smooth. He is energetic, but his mommy needs to tell him to stand up straight and tall. His posture needs a lot of work. Still, he is charming. Tonioli proclaimed him the one to watch. Goodman thought his Quickstep was the best dance of the night and Inaba loved his dynamics.
Scores: Inaba – 7, Goodman – 8, Tonioli – 8, Harland –7

Kendra Wilkinson (Reality TV Star) and her partner Louis van Amstel
She was so worried about not looking like a lady. Well, she looked like a lady and she danced the Quickstep very well. However, she misstepped and the judges were on her for that. Tonioli gave her props for trying her best. Inaba complimented her on learning the dance techniques. Goodman was more focused on Wilkinson’s chest bumping into her partner.
Scores: Inaba – 6, Goodman – 6, Tonioli – 6, Harland – 6

Ralph Macchio (Actor) and his partner Karina Smirnoff
He is sooooo cute! Just like he proved twenty something years ago, Macchio still has his charm. Unfortunately, when you start off at the top it is very difficult to stay there. Macchio has stayed in first place by one point this week but he has a lot of work to do to keep up his slight lead. Goodman wanted him to bring it down a bit in his Jive. Tonioli commented on the obvious fact that Macchio has a huge ability factor. Inaba thought he danced very well.
Scores: Inaba – 7, Goodman – 7, Tonioli – 7, Harland – 8

Chris Jericho (Wrestler) and his partner Cheryl Burke
He has gone from the beast to the ballroom bandit. He showed refinement and elegance before tonight unassociated with any wrestler…maybe ever. Goodman thought his Quickstep was breezy and bright. Tonioli said he is a good student to Burke’s teacher. Inaba said she was lovin’ Jericho right now.
Scores: Inaba – 8, Goodman – 7, Tonioli – 8 Harland – 7

Mike Catherwood (Radio Talk Show Host) and his partner Lacey Schwimmer
Stomp…stomp…stomp! It was like he was dancing around in big clogs. His feet seemed so heavy and uncoordinated. But he did show great effort, almost too much. Goodman said his Foxtrot  was better than last week. Tonioli thought he morphed into a fly on flypaper. Inaba begged Catherwood to be consistent
Scores: Inaba – 6, Goodman – 5, Tonioli – 6, Harland – 6

Kirstie Alley (Actress) and her partner Maksim Chmerkovskiy
Just for the pure entertainment value of it, I pray that Americans will vote to keep Alley on the show as long as possible. Alley just hopes to hit her weight goal before she is axed from the show. Either way she is extremely riveting to watch. Inaba thought she was so in her element doing the Quickstep. Goodman noticed a loss of energy at the end of her dance. Tonioli told her to nevermind the weight loss, you’ve got the talent!
Scores: Inaba – 7, Goodman – 6, Tonioli – 7 Harland – 7

Who Has Legs To Take Home The Mirror Ball: So far, Kirstie and Ralph are the two frontrunners in my opinion.

For photos of tonight’s performance, see below.