The composer chats about her latest project 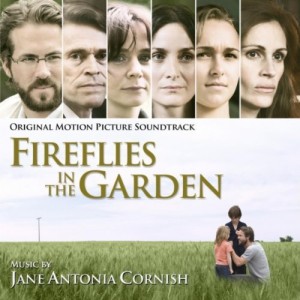 FIREFLIES IN THE GARDEN soundtrack | ©2011 Buysoundtrax

When the recriminations of an intellectual clan’s past collide with a tragedy in their present, familial fireworks are sure to ensue in the finger-pointing fallout. But tender is the musical night in the delicate hands of composer Jane Antonia Cornish, who handles FIREFLIES IN THE GARDEN with a gentle, and greatly affecting touch. She also bridges two classical worlds as Dennis Lee’s film segues from past to present, as the beautiful melancholy of piano and violin-driven chamber music meets the progressive rhythms of such modern classicists as Arvo Part and John Adams. It’s an approach that’s entirely apropos for the battle between a failed author father (Willem Dafoe) and his mass-market novelist son (Ryan Reynolds). Once played out physically, their simmering dislike now threatens to screw up another young kid’s life upon a devastating homecoming. Yet this family opera is always more cerebral than soap, especially thanks to the aching melody of Cornish’s score.

Though the revelation of FIREFLIES’ score should have happened sooner than later, the film’s release from the shelf marks the most high-profile film that this Englishwoman in Hollywood has scored. Cornish’s accolades included a British Academy Award for the charming fantasy stylings of 5 CHILDREN & IT, and nomination from the International Film Music Critic’s Association for the thrillingly turbulent ISLAND OF LOST SOULS. A degree from London’s Royal College of Music has also ensured Cornish’s interest in writing classical pieces outside of the LA bustle, where she’s also worked as an orchestrator for John Powell on such rambunctious scores as HANCOCK and HORTON HEARS A WHO! Now FIREFLIES nicely puts Cornish into a camp most popularly occupied by Rachel Portman, a place of delicate heartstrings that marks this upcoming composer as an artist who’s able to evoke powerful emotions with an elegant whisper instead of a maudlin shout.

ASSIGNMENT X: How did you arrive at your musical approach with FIREFLIES writer-director Dennis Lee?

JANE ANTONIA CORNISH: When Dennis and I discussed the score initially, we agreed that it should be a classical score featuring piano trio, (piano, violin and cello), with the three instrumentalists also performing as soloists with a chamber orchestra. We spotted the film in detail, but at the same time I was encouraged to write in my own style and go with my instinct when approaching scenes, which was a dream! So the score ended up with a modern classical sound with some hints of minimalism, as that’s how my concert music sounds. Due to the intimate nature of some of the scenes, the music had to be deeply emotional, beautiful, and not too overbearing.

AX: With so much sadness already in this GARDEN, were you worried about the chamber approach making the film too depressing?

CORNISH: Not at all. I think that chamber ensembles can create a bright, energetic sound too. Some of Schumann’s chamber works — his piano quintets, for example — are particularly uplifting. I was aware that, tonally, the score to FIREFLIES shouldn’t be downbeat or depressing; instead it required an expressive, highly emotional sound that also contained moments of levity during the more humorous, fun scenes. I think piano trio and chamber orchestra worked well, as it enabled me to be sparse in certain places where a delicate sound was needed. The instrumentation allowed the score to enhance and not dominate these intimate scenes, so that the audience will empathize with the characters. The full chamber orchestra and solo cello create a fuller, richer sound in the visually and dramatically larger moments.

AX: Tell us about your main character themes.

CORNISH: I think the most memorable theme is for Lisa (Julia Roberts). As I mentioned, I was encouraged to write this score in my style and really create a speciﬁc sound. I was so moved by the ﬁlm when I ﬁrst watched it that Lisa’s theme came to mind right away. I played the piece to the picture, and it really did work perfectly. It is a little more classical in style than the rest of the score, but it’s so richly emotional that it lent itself perfectly to the scenes with Lisa and her son. In its full form, the theme features piano trio (piano, violin and cello).

However, in other more intimate and quiet scenes, the theme recurs in a sparse form for solo piano, with pauses that allow the scene to breathe without interfering with the actors’ performances. Another theme represents the relationship between Michael and his father. It’s a tense, sometimes abusive relationship, so each time the theme presents itself, piano solo iterates three individual notes which have an uneasy sound to them. As it continues, it’s accompanied by harmonics in the chamber orchestra and held notes sul pont (played on the bridge of the instrument to give it a glassy, unpleasant tone). This theme occurs during the scene where Charles (Willem Dafoe) is harshly punishing his son. The camera cuts to Lisa (Roberts) who is in the house entertaining guests. Repetitive 16th notes come and go in waves from this point onward, under Charles and Michael’s theme, reﬂecting Lisa’s uneasy state of mind and her increasing anxiety over what her husband might be doing to their son. Then there’s the main theme. It’s the ﬁrst piece in the ﬁlm, and features solo cello played by the phenomenal Xiao-Dan Zheng. Minimalist, repetitive patterns are introduced in the orchestra and piano in the background, which establish the musical sound for the ﬁlm. 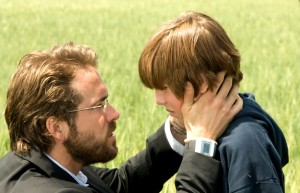 AX: What kind of emotive qualities do you think a solo violin, and piano bring to a story like this?

CORNISH: Instruments are highly versatile. That’s the beauty of choosing a chamber ensemble for the main instrumentation. There are some beautiful scenes between Lisa and her son Michael, where Lisa is reaching out to him as she knows he is having a hard time with his father. During these moments, Lisa’s theme is played by solo piano (performed by wonderful pianist Genevieve Lee) with space, with breath so it doesn’t interfere with the dialogue, but supports it just enough. As for the violin, I wrote a wild virtuosic solo — performed with great passion by Alyssa Park —to express Michael’s anger and despair. The solo ends with a huge, low, held dissonant chord on the piano. It’s gratifying to be able to use the same instruments to conjure up such extremes in emotion.

AX: Besides its classical approach, your rhythms also bring to mind such modernistic composers to mind as Philip Glass, John Adams and Arvo Part. How did you want to combine these sounds of old and new-school classical music in that fashion?

CORNISH: Thank you! Those are very favorable comparisons! As mentioned earlier, I had the luxury of writing in my style for this project, so that’s why a lot of the score is modernistic. The more traditional sound found in Lisa’s theme was appropriate for this matriarchal character. I wanted to create a memorable piece that was recognizable when it returned in its various forms.

AX: One of the highlights in the score is “Blowing Up Fish,” which is heard when Michael takes his sister’s kids out for a especially unique way of catching dinner. Could you talk about composing this scene?

CORNISH: This was a fun cue to write because the scene has quite a bit of humor, as well apprehension and excitement. So I wrote the piece in a minimalist style, split into two parts for the orchestra and piano. The strings play repeating patterns over each other. Sometimes the notes overlap, other times they’re independent, to create a driving force. As the camera pans to show the beautiful scenery at the lake where Michael and the children are, the score develops into a prettier, more evocative sound, but keeps the excitement and drive going. The musicians put a great energy into the performance, and it really comes through in the soundtrack. 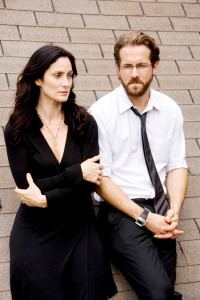 AX: Could you personally relate to FIREFLIES’ story at all? And if so, how did that come across in your score?

CORNISH: Fortunately, I haven’t experienced what Michael goes through in FIREFLIES. However, the ﬁlm is so beautifully made with such incredible actors that I couldn’t help but empathize with the characters.  I was incredibly moved and inspired by the ﬁlm.

AX: Which ﬁlm composers were your biggest inﬂuence? And how would you describe the state of female composers in Hollywood now?

CORNISH: I enjoy listening to any score that is well written and where the composer has a unique voice. A score that had a huge impact on me when I was about 19 was Tôru Takemitsu’s score to RAN, which made me decide to pursue a career as a ﬁlm composer. It’s such a powerful piece of music. I think Philip Glass’ music is wonderful, and I love his ﬁlm scores. I saw NOTES ON A SCANDAL again recently – what a great score. So chilling! There are certainly more female composers now than ever before, which is a good thing, but we’re still a rarity! When Shirley Walker was composing in Hollywood she really paved the way and I’m enormously grateful for what she did.

AX: Could you tell us about your next ﬁlm HIGHLAND PARK?

CORNISH: Yes, it’s a wonderful ﬁlm directed by Andrew Meieran about a group of friends in Detroit who are suffering the effects of the economic downturn, and who have been buying lottery tickets together as a group for years. You can probably guess what happens next! Parker Posey, Danny Glover and Billy Burke are the stars. The score is written for orchestra and piano with some percussion and guitars. It’s at the end of post-production now, so it should be out in theaters soon.

AX: FIREFLIES IN THE GARDEN has the potential of being a breakout score for you, especially with the best cast you’ve been able to score. Yet the ﬁlm sat on the shelf for a while. How do you emotionally get through the vagaries of Hollywood distribution when they can affect your career like that?

CORNISH: Yes, I think this is an important score for me. It certainly has an amazing cast and outstanding ﬁlmmakers. I was brought in to score FIREFLIES this summer, so I wasn’t involved creatively while the ﬁlm was being re-edited. The US release is a new, never-seen-before director’s cut. As a composer, I always try to score ﬁlms without thinking about distribution, as it’s not something I can inﬂuence. I’m excited that FIREFLIES is out in the US; it’s such a beautiful ﬁlm and I think audiences here will really love it.