Exclusive Interview: The voice actors of the VOLTRON animation series celebrate the launch of new videogame 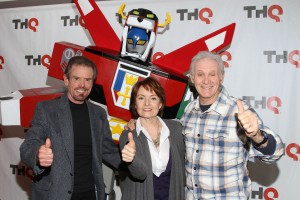 The classic 1980s animated series VOLTRON: DEFENDER OF THE UNIVERSE is back and more popular than ever – not only from a whole generation who grew up worshipping it, but with the brand new THQ game (available for download on XBOX 360 and PlayStation 3) that incorporates footage from the series and the original dialogue voiced by master voice actors Michael Bell (Lance, Sven) , Neil Ross (Commander Keith, Pidge) and B.J. Ward (Princess Allura, Haggar).

At THQ Headquarters in Agoura Hills, CA on Wednesday night, a live event was held to engage fans and bring together these voice talents. The event was hosted by Clare Grant of Team Unicorn and VOLTRON FORCE producer Jeremy Corray. Also in attendance was actor and ROBOT CHICKEN co-creator Seth Green and the other members of Team Unicorn – Rileah Vanderbilt, Milynn Sarley and Michele Boyd.

While at the event, the three voice actors spoke with ASSIGNMENT X in this exclusive interview about their VOLTRON experiences and this newfound celebration of the animated classic.

ASSIGNMENT X: How cool is this to celebrate something from the 1980s that’s still very popular?

MICHAEL BELL: I’m having a fabulous time, this is very exciting. It’s a whole new generation locking onto what we did almost 30 years ago and it’s very exciting. 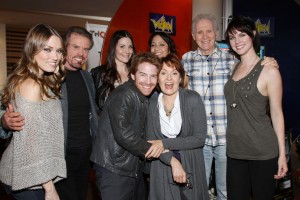 AX: As voice actors, you don’t get this kind of attention usually and I’m assuming you don’t realize the impact until something like this event where people are fawning over it?

BELL: Now with the Internet, our faces have become a little bit more familiar. It’s starting to happen where people go “aren’t you?” or “didn’t you?”

NEIL ROSS: I think we all thought we were riding on water [with VOLTRON] and it would have its moment in the sun and be forgotten, but apparently that’s not true. I relate. I remember when I was a kid, I used to watch WILD BILL HICKOCK on television, and years later I rode in a parade with Guy Madison who played that part and got to hang out with him a little bit. So I know the feeling. It’s just wonderful that fans remember it and we have some kind of legacy.

B.J. WARD: I think it’s great that there’s a ripple effect. You don’t know when you’re doing something what it’s going to mean, if it’s going to mean anything, and if it’s going to reach anybody. To come here and see all those people who grew up with it and ran home from school to see it or got up in the morning with a bowl of cereal to watch it, it’s a fun thing. 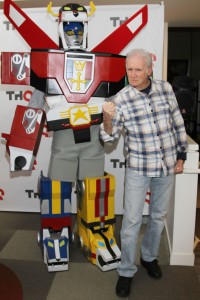 AX: Out of all the projects you’ve done, did you ever figure at the time that VOLTRON would be that one project that would gain such a huge following?

WARD: It was somewhat unusual to begin with, because it was already a Japanese cartoon and we were already putting new words in it. It wasn’t one of the big studios either. It wasn’t the Hanna-Barbera or the Ruby-Spears. There was something already different about it. We did so many of them and so quickly. It’s the one that could have done something and it did. You never think that way when you’re doing a job. You just do the job and then you’re on to the next one.

ROSS: I could never tell. I always approached every project with as positive an attitude as I could bring to do it and work as hard as I could, but if you said “which one of these is going to last and be remembered?” I wouldn’t have had a clue

BELL: As Neil says, you step into it, do it, and watch it, say “that was great, that was fun, it will have its run” and then we all go home and do something else. I had no idea it would have this kind of resurgence. We weren’t aware of the audience. I never assumed kids watching this would say – “this is going to be my show” and they would identify with it. We assumed, “this is just another animated show, they’ll watch it and new shows will come up and it will be forgotten.” It’s amazing that it’s had this kind of legacy.

AX: Is there a project that means a lot to you – the one that maybe got away that you wished more people should have seen?

BELL: I loved INHUMANOIDS. I thought that was great fun.

AX: The three of you worked together a lot.

BELL: We all knew each other.

WARD: It’s funny, I’ve always been paired up as a love interest with Michael. THE SNORKS, JANA OF THE JUNGLE. Maybe it was because of where the timber of our voices were, I don’t know.  I learned a lot from Michael. My first cartoon was JANA OF THE JUNGLE. I had one voice when I auditioned. I for the part, we were doing the first session and I’m sitting next to Michael at the mike and they said, “now Jan is going to speak to the narwhal in his own tongue.” I went, “Michael, help. What is a narwhal?” I had a lot of on-the-job training. I was glad to sit next to Michael, I must say.