Exclusive Interview: Clare Grant gets her Team Unicorn geek on for VOLTRON: DEFENDER OF THE UNIVERSE

Exclusive Interview: Clare Grant gets her Team Unicorn geek on for VOLTRON: DEFENDER OF THE UNIVERSE 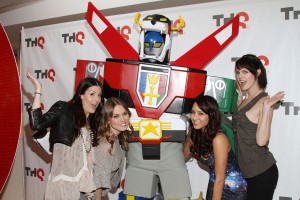 The classic 1980s animated series VOLTRON: DEFENDER OF THE UNIVERSE is back and more popular than ever – not only from a whole generation who worshipped it while growing up, but with the brand new THQ game (available for download on XBOX 360 and PlayStation 3) that incorporates footage from the series and the original dialogue voiced by master voice actors Michael Bell (Lance, Sven), Neil Ross (Commander Keith, Pidge) and BJ Ward (Princess Allura, Haggar).

At THQ Headquarters in Agoura Hills, CA on Wednesday night, a live event was held to engage fans and bring together these voice talents. The event was hosted by Clare Grant of Team Unicorn and VOLTRON FORCE producer Jeremy Corray. Also in attendance was actor and ROBOT CHICKEN co-creator Seth Green and the other members of Team Unicorn – Rileah Vanderbilt, Milynn Sarley and Michele Boyd.

ASSIGNMENT X spoke with Grant who is one of Voltron’s biggest fans. She’s also taken her love of geekdom and formed Team Unicorn which has created a series of hilarious online videos that spotlight girl geekdom at its nerdiest (and sexiest).

ASSIGNMENT X: This was your first hosting gig – how nerve wracking was it for you?

GRANT: I was a little anxious in the beginning, because when you’ve never done something before, you’re a little unsure if you can actually pull it off. Luckily, it was talking about my favorite thing in the world which is Voltron, so once I got all the key points, it was very easy to go from there. I had to hold myself back from getting too excited, because these are the original voice actors here. These were people who were my heroes – not just from VOLTRON, but also from G.I. JOE and SCOOBY DOO. 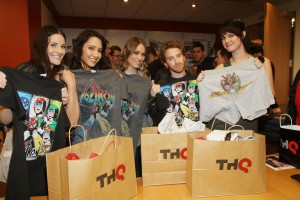 AX: What were your first memories of VOLTRON?

GRANT: When I was in elementary school, VOLTRON came on in the mornings before school and I refused to get into the car and go to school until VOLTRON was over. It was a fight every day with my mom. She never won. I won every time. Luckily I had the biggest crush on Keith, and my mom did too, so she understood I needed to watch it all. I was late every day to school because of that school, which means I never got an S or an E in conduct. I was always in the N or a U in conduct, which is fine with  me, because I got to watch Voltron. It was my first introduction to Japanese styled animation, which was so different from anything I was even familiar with. Giant Lion Fighting Robot – there is nothing better than that.

GRANT: We organically came together. Rileah knew us individually. We all met when she got married and she started having nerd girl game nights where it was bowling or something. When Comic-Con came around last year, the three of them decided they wanted to dress up as SAILOR MOON characters. Being the super nerd I am, I sewed a Sailor Moon costume 12 or 13 years ago. I’ve never actually worn it in public. It’s one of those things I only wear in my house when I’m really drunk and playing ROCK BAND or something like that. When they asked me if I would be their Sailor Moon, I was like “yes. Best Day of My Life.” We had so much fun at Comic-Con and immediately became friends.

P.S., we took a picture with Voltron. That was one of my first interactions with the team behind Voltron – THQ. Milynn came up with this great idea, while she and Michele were at the beach, to parody Katy Perry’s “California Gurls” and making it “G33k and G4m3r Girls” and we made the music video for it. It was such a really fast internet sensation, we realized quickly that the female nerd core is really large – super over-numbers and very under-served and we were busting at the seams with ideas we would want to see ourselves and kept making them. 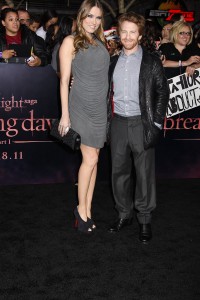 AX: What is the nerdiest thing that you like that no one would believe you were into it?

GRANT: I don’t know too many people who have played the original DRAGON WARRIORS series or liked it as much as I do. I’m crazy into fantasy books. I got really obsessed the Robert Jordan series THE WHEEL OF TIME.

AX: Anything else you want to add about VOLTRON?

GRANT: Voltron was my first crush – more specifically Keith. I loved him. The Black Lion. And I wanted to be Princess Allura. I didn’t think anyone in the world was cooler than her. I was completely happy when she took Sven’s place as the Blue Lion.

AX: Have you dressed up as Princess Allura?

GRANT: At Comic-Con this last year, when Voltron had the big panel and launching the new series, I put them in charge of our costume designer for all the Team Unicorn videos. She made the most amazing Princess Allura costume. I’ve pined over that costume. I just wanted that for myself so bad. We all want the costumes, but we would probably fight over who got to be who. Rileah is our designated leader. She deserves to be the Black Lion. She might have to fight Milynn over the Black Lion, because that’s her favorite lion. I don’t know if I would have to fight Michele or not for Princess Allura’s lion – but I’m willing to go there and willing to fight.