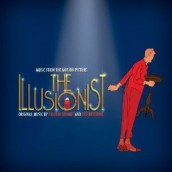 There have been many terrific, epically in-your-face scores for this year’s exceedingly tasty crop of Hollywood CGI toons. So it’s particularly nice to hear the powerful gentility of his beautifully animated French film, one that just received a deserved Oscar bone nod to the quickly vanishing hand-drawn pictures that used to be the category’s, and industry norm.

That’s also very much the theme for director-animator-composer Sylvain Chomet’s fable about the waning days of vaudeville, as embodied by a magician who plies his rabbit about Europe in the early 60’s. Where Chomet’s equally wonderful, and far more antic TRIPLETS OF BELLEVILLE drew on jazz-filled French dance halls for its inspiration, THE ILLUSIONIST’s varying locales allows Chomet to write some inspired Beatles-style songs, play Scottish bagpipes and engage in exotic, India percussion for the stage acts.

What truly shines here is how Chomet uses a wistful, jazz tone to speak for his nearly mute character. The poignancy that adds so much color to ILLUSIONIST just might be he most heartbreaking use of jazz to grace the art form since Vince Guaraldi’s scores for those PEANUTS specials. Here, that kind of tender, spare vibe makes the ILLUSIONIST a beautifully bittersweet listen, particularly in Chomet’s final piano passages that delineate the inevitable end of a charming, seemingly now-prehistoric form of entertainment.

If animation had a tune for the tears in rain washing away animation’s paint strokes for computer imagery, this would be it in anyone’s musical language.