Home » The X List: SAW – THE FINAL CHAPTER One of the Highlights on Blu-ray and DVD This Week 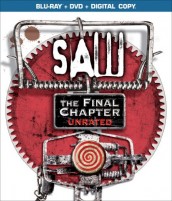 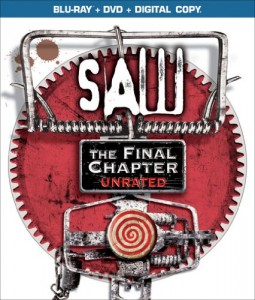 SAW – THE FINAL CHAPTER – I think the title of this misleading … anyone remember the FRIDAY THE 13TH series? Yeah, exactly. This time we get all of the answers to the questions that have been left during the course of the series about Jigsaw, his protégées, his legacy, his family and his victims. Cary Elwes returns to the series to bring it full circle as all new traps, all new bloody deaths and all new brutal killings are unleashed. While not in 3-D as it was in the theater, this is still a great way to finish the series especially if you were a fan. Included on the Blu-ray version is a special featurette “52 Ways to Die” recounting all the deaths and traps in the series. There are also deleted scenes, music videos and more.

RED – Well, I wasn’t expecting much going into this to be honest and that’s a good thing because I didn’t get a lot out of this. The premise is actually a good one – take a bunch of aging hitman and put them together for one last hurrah when they get targeted by government they used to work for – but it just never comes together and tries to be too cute and too clever for its own good. You’d think it would rock with Bruce Willis, Morgan Freeman, John Malkovich, Helen Mirren, Karl Urban, Mary-Louise Parker and Richard Dreyfuss … yet its milquetoast. There is nothing wrong with how it looks or the way it was shot or the special effects or anything, the storyline sucks. And there isn’t a lot on Blu-ray either with only one six-part interactive feature with interviews, trivia and videos. 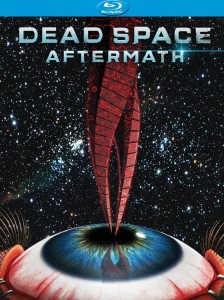 DEAD SPACE – AFTERMATH – Another DEAD SPACE game is coming out and with it another great animated film about what happened before the events of the games. It is freaking brutal and tells the story of four people that survive another invasion from the nasty creatures that turn humans into the ultimate killing machines. While there is traditional animation involved here, there is also a heavy dose of computer animation and it actually works as most of the brutality is told in a flashback form. One thing is for sure, the human race hasn’t evolved that much as it is just still one person screwing over another, even in the future.

ZORRO – THE COMPLETE SERIES – How freaking cool is this? The long sought-after series that numerous fans have been clamoring for is finally here and not only is A&E Home Entertainment distributing these seasons as individual seasons, but they are offering up the whole thing in one great collection. All 88 episodes of the fan-favorite series featuring the masked superhero are collected here on 14 DVDs. There are also a host of special features including in the collection such as “The Mark of Zorro” – the full-length silent film. Also included is a few episodes of the theatrical serial, trailers for the serials, never-before-released pilot and photo galleries.
GLEE – SEASON TWO, VOLUME ONE – I usually totally hate when they break a season into two parts. I realize it worked for them the first time in the first season, but they captured lightning in a bottle I think. I think people will be less likely to pay for this and hold out for the full season knowing that Fox will also be willing to rollout the full season in many different flavors come the summer. There are a good deal of extras on the DVD including bonus songs, a playable music jukebox with songs from the show’s first half, a whole bunch of funny Sue Sylvester featurettes and surprisingly a bunch of featurettes about Britney as well.

THE UNIVERSE – THE COMPLETE SEASON FIVE – Another kick-ass season of the show that explores everything in the universe from comets, to birth of stars, to death of stars, to galaxy formations and wonders of the universe. All done through deep space telescopes, CGI and interviews with a number of experts. This season includes the episodes: “Mars: The New Evidence,” “Time Travel,” “Secrets of the Space Probes” and “Dark Future of the Sun.” Who needs science fiction when we have reality!

WEBSTER – THE COMPLETE FIRST SEASON – The inaugural season of the now-classic sitcom finally makes its way home in this 3-DVD set collecting all 22 original half-hour episodes starring Emmanuel Lewis. Included in the extras is a WEBSTER Trivia game. Remember, distributors are more likely to release more seasons if the first season is popular so keep that mind when you purchase at Best Buy, Costco or Amazon.