In the often copycat world of reality competition television, Syfy’s series FACE OFF, premiering tonight (Wednesday) at 10 PM, is a first. Twelve contestants are assembled, not to sing, dance or romance, but rather to prove their excellence and originality in the realm of special-effects makeup. The regular judges for the twelve-contestant, eight-week show include multiple Oscar winner Ve Neill (BEETLEJUICE, ED WOOD, MRS. DOUBTFIRE), Patrick Tatopoulos (the UNDERWORLD films, the GODZILLA remake) and Glenn Hetrick, who runs the Optic Nerve special effects make-up shop (HEROES, CSI: NY). The host is actress McKenzie Westmore, of the Westmore effects makeup dynasty.

At a party thrown by NBC for the Television Critics Association, Hetrick talks about what makes FACE OFF unique and how the competition works. 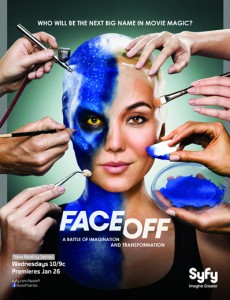 ASSIGNMENT X: Were you part of the team that created FACE OFF?

GLENN HETRICK: No, the show was already designed when they came to us [the judges] and I’ve got to say, the challenges are quite ingenious, because it could have easily been an interesting concept for an episode, but by the time you’d seen the third week of people putting makeup on, it could have gotten very boring. The way they designed the challenges was so each week tests a different aspect of [the contestants’] skill set, it pushes them, makes it really intriguing all the way through.

Once they had that format, they started this massive casting process, and they talked to a bunch of different effects artists and started figuring out who they thought would work on the show. They knew basically who they wanted to talk to. This is going to be a lot of fun. The format’s been out there, but the two major things that are different about this show are, the way other reality shows are cast – even though they’re real people, they may set out to put that team together, people that are going to date or cook or build a car, there’s something that [the producers] are looking for.

On this show, what they were looking for were people who are good effects artists, first and foremost. You had to be able to do what we do. And that makes them very unique and the dynamic between them in the house where they’re living together and all of this on the line in an ultra-competitive industry, it gives it a different spin on things. That and the reveals. At the end of the show, you get the cherry, which is that you get to see this awesome transformation – some that work, some that don’t, who failed this week, who succeeded, so I think that makes it extremely unique in this field. I hope it transcends the sci-fi/horror genre and really opens up and resonates with a wider audience, and that people will be interested in it.

AX: Did you and Patrick Tatopoulos and Ve Neill and possibly McKenzie Westmore have to disqualify people who worked in your shops and/or were members of the Westmore family?

HETRICK: McKenzie, the hostess, was not involved in the decision-making process. Patrick, Ve and I were, and there’s nobody that’s worked directly for us on the show. I think one of the guys had worked a little bit for Ve in the lab and one or two of them had been through my shop and worked for one of my supervisors for a day or something, but I was not personally familiar with any of them. Certainly when we went in, it wasn’t like, we know these people, so we’re favoring this person, and we don’t like that person. It was all an even playing field and it was all about how they performed inside of each challenge.

AX: All of the challenges involve effects-making application without any CGI, correct?

HETRICK: Every challenge for this first season is definitely something that’s applied to a human being. It’s really about the art of makeup effects, creating the design and how it works on the performer.

AX: Are there time limits on the challenges?

HETRICK: As a matter of fact, not only is there a time limit, it is a character on the show. I think what you’ll see is that it’s a two-to-three-day process, and what that boiled down to for them is about fifteen hours, start to finish, which often at times is not enough for the idea to gestate. They have to be finished. They have to have sculpted it, designed it, sculpted it, have it out of the molds and put it on someone in fifteen to seventeen hours, depending on the challenge. So this is a huge factor in the show.

HETRICK: It wasn’t my decision on the show, because I’m not involved in [that aspect], but I’ve got to say, to my knowledge, absolutely not. They were basically people with acting experience, but I don’t think any of them had experience wearing makeup. So this is a perfect example of how there are all these different aspects to the challenge that someone could excel at, yet not necessarily be expecting. When they design their makeup, it’s not only important that it looks cool, it’s got to fit the performer and be comfortable and the performer has to be able to move [wearing] it. So they’re putting it on these people that don’t have a lot of experience with makeup and they’re trying to give them direction as to how to animate the makeup in front of us, and that becomes part of the show.

AX: Have you and your fellow judges Patrick Tatopoulos and/or Ve Neill worked with each other before at some point?

HETRICK: Ve and I have a good personal relationship and we did work on a show called BIOSHOCK based on the videogame, that started and then very sadly got paused, but that was going to be absolutely huge. And we’ve done little things with each other here and there. Patrick and I have never worked together, but now that we’ve met each other on this show, it’s already formed this really great friendship and the beginnings of a working relationship, so it’s very exciting. It’s really cool to come together with people I didn’t know. 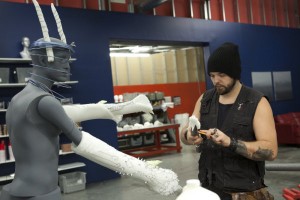 AX: Have any of the contestants come up with a way of doing something or an artistic concept where you thought, “Oh, why didn’t I think of that?”

HETRICK: I don’t think that they have time to reinvent the wheel, but there are some corners that are cut for creating the kinds of makeups that they’re trying to accomplish, which is get it on stage in front of us and it has to look good. They know we’re going to come up there and pick apart the seams, but yeah, there are some really cool ideas and some pretty advanced concepts in how to take a shortcut, when they knew damn well that we were going to be myopically focused and holding them over the flame on edges and blending, and they knew they couldn’t pull that off in the time, or they didn’t have the skill set to do it, or they couldn’t paint that well, so yeah, in self-preservation, it created some real ingenuity.

AX: And what is  your shop Optic Nerve working on at present?

HETRICK: We just started something really cool, JOURNEY TO MYSTERIOUS ISLAND, and of course, CSI: NEW YORK, love that show, always pushing the envelope and coming up with so many cool things.

AX: Speaking of Optic Nerve, how much time does doing FACE OFF take away from your work there?

HETRICK: Very lucky, [judging FACE OFF] wasn’t a strain on me and it turned out to dovetail very nicely into [the rest of the work schedule]. I still have all my responsibilities designing and overseeing everything [at Optic Nerve], but [the judges] didn’t have to spend an inordinate amount of time every episode. When you see the show, at the beginning, we get involved randomly in the smaller challenge, and then we’re there for the big reveal, the day that the work is over and we look at what they’ve done. So eighty percent in between is nothing to do with us. It’s them in the house, it’s them in the shop and it’s seeing how they’re working with each other, who’s emerging as a leader, who’s starting to maybe not like somebody else, which is cool for us, because we didn’t see it, so as they’re starting to screen the episodes, we’re getting to see all these things, a process that we were a part of that we had no idea what was happening.

AX: Now, are you judging strictly based on merit or does “This person is behaving like a jerk” come into the decision-making process?

HETRICK: It absolutely does play a part. There were many times where I’m looking at someone, going, “You know, look, I know this went wrong, but I know that you’re talented and I know next week it could be a completely different story, so the question becomes, is this the worst thing this week and do you lose?”

A lot of times, it wasn’t that clear-cut – the winners and the losers were sort of neck and neck, the best and the worst – so yeah, the attitude and their ability to learn in the creative process, the decision-making process, those were all huge aspects and certain challenges brought that out more than others. The people that did mediocre work and made a huge mistake and tried to pass it off in front of Ve Neill and say that there’s nothing wrong with it and they’re very happy with it – I have a huge problem with that, because [you have to] own mistakes that you made without making excuses, that’s a part of learning to do what we do. You can’t show up on set and go, “Hey, this is great!” when it’s absolutely awful. You’ve got to own it. So I would pick apart why they didn’t make decisions to ensure it was better before it got there, that type of thing.

That’s a big part of the show, it’s not just watch them sculpt the vampire, watch them glue it down, who’s going home? I’m really excited to see what the public thinks of this. I know that the industry will be watching, because it’s what we do, we already love this, but I think everyone at home is also going to really enjoy it. I think that this format has succeeded with other things that are not nearly as interesting as getting to see behind the scenes in the world of makeup.