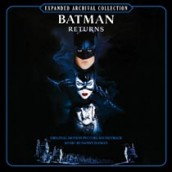 Danny Elfman's seditious superhero circus from hell now reveals all of The Bat, The Cat and The Penguin

Few composers have more fun unleashing their devilishly twisted side like Danny Elfman, especially when longtime collaborator Tim Burton truly lets his creativity go bats**t. But if one film takes that cake in their always-eccentric pairings, then it would be the shining piece of comic book coal called BATMAN RETURNS. Sure their first BATMAN was dark, but no one expected the moral bestiality that would result from the pairing of The Bat, The Cat and The Penguin, a ménage a trois complete with whip-wielding S & M, intended child homicide and a very bloody nose- all prancing about to the jollily sinister heroics of Elfman’s Christmas-carnival-from-hell score.

Though there’s little of the sound of Elfman’s Oingo Boingo songs in BATMAN RETURNS, the oompa-loompa calliope vibe that fueled the band is very much present in the pipe organs, taunting chorus, and rollicking xylophones that embody The Penguin’s Circus of Crime. And that’s not the only tuneful representation of characters here, as Elfman uses his string section to meow, hiss and slink about as it becomes the enticing claws of the Catwoman. Throw these completely oddball approaches in with the familiar, theme-heavy brooding of Batman, and you’ve got a delightfully unbalanced soundtrack that plays like Wagner trying to bash his way out of a Christmas parade from hell. It’s just one of the many merry prankster elements that multiplex audiences in 1992 didn’t begin to get about this cleverly seditious sequel.

Now  La La Land Records follows up their complete Elfman BATMAN album by revealing just how complex Elfman’s seeming madness was. With this double album’s score clocking in at nearly 90 minutes, this bells and whistles presentation adds even more hell-bent-for leather romance to the Catwoman confrontations, an eerie underbelly to the Penguin’s zoo hideout and more thunderous charging that sends Batman to the villains’ lair. Put on numerous alternates and original album versions, plus a cocktail band version of Rick James’ “Superfreak,” and this new, expansive BATMAN RETURNS reveals itself as what could be considered Elfman’s ultimate mock superhero opera.