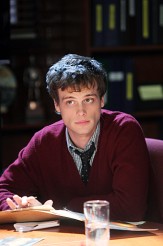 CBS may not be aware of it, but the network’s onscreen nerds tend to flock together at parties. Witness Matthew Gray Gubler and Kristen Vangsness of CRIMINAL MINDS hanging out with Pauley Perrette of NCIS. Gubler plays his show’s resident genius, Dr. Spencer Reid, Vangsness is MINDS’ computer sorceress Penelope Garcia and Perrette is Goth techno-whiz Abby on NCIS.

“Did you hear about the crossover with Pauley?” Gubler asks excitedly.

“Our characters are best friends from school,” Vangsness adds.

“Reid and Abby went to MIT together,” Gubler elaborates.

Are NCIS and CRIMINAL MINDS combining forces? Is this a huge crossover scoop?

“It was created by the three of us,” Perrette relates. 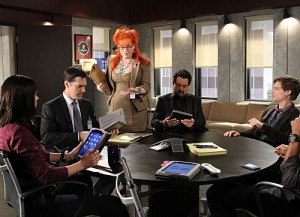 Perrette heads off to talk NCIS, but Vangsness stays for moral support and teasing while Gubler submits to journalistic interrogation about his work on CRIMINAL MINDS, now in its sixth season on CBS, Wednesdays at 9 PM.

For starters, Gubler reveals the real reason Reid got shot in the leg early last season. In the story, it’s because Reid throws himself in front of a potential crime victim to protect the man. However, the onscreen wounding was scripted to cover a real-life injury sustained by Gubler.

ASSIGNMENT X: What happened to your leg?

MATTHEW GRAY GUBLER: I was dancing, dislocated my kneecap and chipped some bone and cartilage.

GUBLER: It was pretty intense. I don’t joke around on the dance floor. It’s hard to explain. It was kind of like a Michael Jackson-esque move, God rest his soul. He would’ve pulled it off much better.

AX: Do you think it’s harder to write around this sort of injury or around a real-life pregnancy?

GUBLER: Probably a pregnancy. I don’t know – it’s tough. They’re both a problem to write around. The writers have to get creative.

AX: Can you talk a little about the difference in Reid’s relationship with Gideon, the BAU team leader played by Mandy Patinkin for CRIMINAL MINDS’ first two seasons, and Dave Rossi, the experienced FBI profiler played by Joe Mantegna, who’s been with the series from Season Three onward? 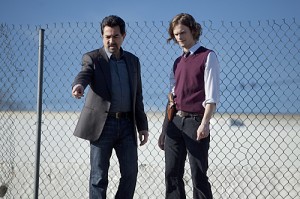 GUBLER: I think with Gideon– Mandy’s character was Reid’s mentor and with Joe, Joe’s character versus Mandy’s, I think that Joe is a character that these profilers, et cetera, have known about, but he’s more of the wild card of the bunch, the Pauly Shore of profilers. So he’s more of a wild card and it’s a different affect, for sure.

AX: Reid seems to have a lot of sympathy when the killers are very young and/or have been severely abused or bullied themselves.

GUBLER: Yes. Whenever there’s a preteen in trouble, Reid seems to empathize with them. [The Season Three episode where the perpetrator kills the school bully] was a very fun episode.

AX: Has there been any aspect of the show that’s ever grossed you out?

AX: So you actually would prefer to be one of the people who clean up the crime scenes?

GUBLER: I don’t like any of it [laughs]. I love it all so much! It always has affected me, definitely. If anything, it’s gotten worse. It gets to you after awhile. There are a lot of horrible things that you look at, but it makes it a lot easier to play Reid, because he definitely would feel the same way. 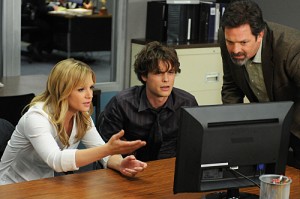 AX: Did you research anything about playing an FBI profiler role when you were cast as Reid?

GUBLER: I read a lot of the profiling books, the John Douglas book, familiarizing myself with the crime scene photos to hopefully desensitize myself and I realized that it’s impossible to desensitize yourself to this sort of thing. And I realized Reid probably wouldn’t, at that young age, be in any better situation than I am.

AX: Do you want Reid to become a little more socialized or do you like him exactly the way he is?

GUBLER: I like Reid the way he is. I know they keep on trying to make him kind of cool. I like first-season Reid, he’s my favorite [version of the character], sort of the naive Reid.

AX: Are you hoping he’ll be traumatized back into that sort of standoffishness?

GUBLER: I think it’ll come back. I have a good feeling it will.

AX: Were you surprised by the back story with Reid’s mother, where we found out she was institutionalized?

AX: How about Reid’s drug addiction?

GUBLER: Not so much. For some reason, it makes sense in Reid’s chronology and timeline, that whole thing – not too surprised, no. It all makes sense to me at this point.

AX: So this is sort of in line with the back story that you had imagined for him?

GUBLER: It fits perfectly. Reid to me has always been such a real character that, yeah, again, it just felt like it was meant to be. I felt that it perfectly explains a lot of things that were set up in Season One and Two. I’m really so happy with how the writers developed Spencer. Did you see PERMANENT MIDNIGHT [the 1998 film adaptation of Jerry Stahl’s autobiographical account of his heroin addiction], with Ben Stiller and Owen Wilson? [Stahl] had some issues. Much like Reid.

AX: Although Reid was not on heroin …

AX: In the new season, what are some of the changes, if you can talk about things that won’t be too spoilery?

GUBLER: Changes thus far – I think there have been some tumultuous things happening with other members of the cast, so I know there’s been some drama with certain characters that may or may not be getting affected by certain bullets flying at their heads. So there’s that – but other than that, I’m not so sure.

GUBLER: Let me think. I liked the Tobias arc – he was the guy who kidnapped Reid and drugged him and put him in the shack. I liked that one a lot. I also liked the arc with A.J. Cook’s character J.J using a little romantic flirtation there for a moment in Season One that never developed. I always liked that.

AX: How was acting with crutches last season? Was that new for you?

GUBLER: It was. And it was definitely an issue, but I like acting with a challenge, so it’s been fun.

AX: To talk about your film career for a bit, when you were doing (500) DAYS OF SUMMER, were you going, “This could be a big cult hit,” or were you just going, “Oh, this is fun”?

GUBLER: I had a feeling it was going to be something pretty spectacular. That script was amazing and the minute I saw Marc Webb, the director, the savvy that he had behind the camera, I knew I had a very good feeling about the film. I called it that it would do well, and luckily, it [was] pretty well-received.

AX: You voiced Jimmy Olsen in the upcoming ALL-STAR SUPERMAN. Have you done any other film work lately? 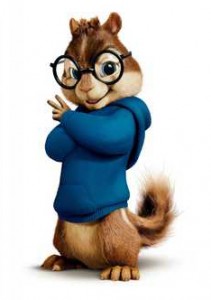 GUBLER: Yeah. [Last year]. I did one called HOW TO BE A SERIAL KILLER, which premiered at Comic-Con. It came out on DVD. And then I was in THE CHIPMUNKS: THE SQUEAKUEL. I was Simon in the first CHIPMUNKS, so I reprised the role.

AX: Do they speed up your normal voice, or do you actually attempt to talk like a chipmunk?

GUBLER: I talk in a very deep voice for it, and then they speed it up. So yeah, it’s a bit of a mind-screw.

AX: In HOW TO BE A SERIAL KILLER, are you the serial killer?

AX: Is there any possibility of that character getting onto CRIMINAL MINDS?

GUBLER: Playing in that movie was so much fun, it was like, “Oh, I love playing the guy on the other side of the law.” It’s so much fun to play the sort of unsavory character. I want to play a villain again, hopefully soon.

AX: I don’t know if you watch other TV procedurals besides CRIMINAL MINDS, but if you do, what would you say is distinct about CRIMINAL MINDS in the genre?

GUBLER: I don’t watch [much TV] – I hardly get to watch our show, because we’re shooting, but I think the difference is that ours has a tendency to be a little more on the suspense side, where it’s not so much a show about clues or forensics, it’s more about saving someone before they die, finding killers. I like to think that it’s a little more tense – more urgency, more at stake, I think. I haven’t seen enough other shows to really comment.

AX: Do you have faith that when you get scripts like the one where Reid went into the infected house, and it looks like he might not make it, that the producers would let you know if the character was going to die?

GUBLER: Yeah. I don’t get too concerned. It’s been a good run on the show, so if they want to kill me, it’s probably my time to go. I try to look at every episode like it’s the end, is how I kind of do it. Because you never know anything in Reid’s life or in the real life of the show. Reid could get shot, the show could get canceled – anything could happen, so I treat every episode as my last. But they would do it well – that would be my only hope. I’ve been really lucky. I’m so happy I get to be in this show and to act. I love doing it. I’m glad people watch it. I’m very proud.