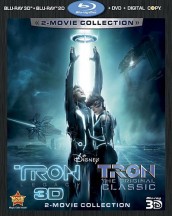 Credit has to be given to the TRON: LEGACY filmmakers for going the reboot route, rather than remake the classic 1982 original. It makes a ton of sense not to ignore the plot from that seminal film, since it was clearly ahead of its time both story and visually.

Plus, how can you pass up bringing back Jeff Bridges as Kevin Flynn – the video programmer User who liberated the programs from the evil Master Control Program (David Warner).

In TRON: LEGACY, the story picks up in present day as Sam (Garrett Hedlund), the grown son of Flynn, has been searching for his missing father since he was a child. When he visits his father’s old arcade, he’s sucked into the computer where he discovers an advanced computer universe being run by Clu, the young program version of Flynn (a computer generated Bridges). Meanwhile, his actual father has aged and is living off the grid in a Zen-like fortress.

Now it’s up to the two Flynn’s and the mysterious Quorra (Olivia Wilde) to stop Clu and get Sam back to the real world.

Just like the original, TRON: LEGACY is a visual paradise – a world that’s familiar to those who loved the original 1982 film, but advanced with 2010 technology. It’s a world we haven’t quite seen before on screen and it’s awe-inspiring. Every frame is a work of art, and the upgrades to the designs of the Memory discs and the light cycles are super cool.

Director Joe Kosinski has crafted a film that does feel a bit sterilized and cold at times. The lightness and fun Bridges brought to Flynn in the first film has been replaced by an icy cool. Hedlund is super-serious as Sam, but a fitting substitute for his father. It’s Wilde though that brings the wide-eyed innocence and playfulness that is a welcome respite to the film’s onslaught of powerful images.

While TRON: LEGACY does echo elements from the original TRON, it also gets mired on occasion in its own super-advanced techno-babble which may take a few more years for non-gear heads to fully appreciate (just like the original).

Now for the special features – and they are plentiful.

The most interesting of them all is THE NEXT DAY: FLYNN LIVES REVEALED which fills in the gaps between the original and the new movie. It’s shot like a faux documentary and it has some additional footage not seen in the film. This is a must. Plus, the little tag at the end is a wonderful shout-out to the original film.

The Second Screen feature that Disney has been using on many of its releases gets a severe workout here where you can follow the movie with enhanced content that synchs up to your computer or iPad.

There’s a first look at the new Disney XD animated series TRON: UPRISING, as well what it took to visualize the film, a look at the cast, Comic-Con footage and more.

A digital copy is also included  of TRON: LEGACY.

TRON: LEGACY took its lumps by critics when it was released, but like the original, it’s an acquired taste. It’s a film that dares to be different, but also attempts to create a world we’ve never quite seen realized this way on screen. It’s a visual treat and it continues the story of Flynn in a way that’s satisfying and has the potential to take the franchise into a whole new territory if a third film is greenlit.

For die-hard fans, it’s best to pick up this 5-Disc copy that has both TRON: THE ORIGINAL CLASSIC (CLICK HERE FOR THE FULL REVIEW) and TRON: LEGACY. It also has the Blu-ray 3D version of TRON: LEGACY which is well worth owning even if you don’t have a 3D TV yet. Only AVATAR and TRON: LEGACY have truly utilized 3D technology to its fullest, and I would say that is the preferred way of viewing this film.