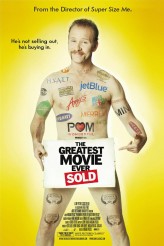 The documentarian reveals how he sold out to POM Wonderful 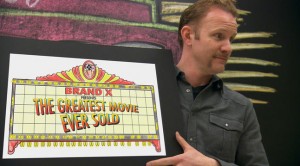 I think it was around the time that James Bond boarded a Brazilian tram car with a 7-Up placard before sending a villain smashing through a British Airways billboard that I noticed (even at the tender age 15 years) that this movie was trying to sell me something. That isn’t to say how much more obvious those thoughts were when Elliot introduced E.T. to earth commercialism by handing him Reese’s Pieces, or how a Dr. Pepper machine just happened to be in the control room where Raymond Burr was facing off against GODZILLA ‘85.

Those days of on-camera advertising now seem absolutely quaint when compared to the relentless “branding” that fills the entertainment we watch to get away from advertising. In exchange for filling Hollywood’s film and TV budget coffers, firms have virtual carte blanche to push their wares, whether characters just happen to end up drinking or driving them. The sell can be not-so satirically overt (as in the literal eye-catching ads of MINORITY REPORT) or get into our brains with a subliminal, buy-buy-buy effect worthy of THE MANCHURIAN CANDIDATE.

Thankfully, we have that none-too-annoying documentary gadfly Morgan Spurlock here to humorously rip away the curtain on today’s rampant branding. And he’s doing it by plastering said advertising all over his POM WONDERFUL PRESENTS THE GREATEST MOVIE EVER SOLD.

Getting his point across in a far more appealing way than other documentary filmmakers with a message to preach, Spurlock uses his whimsical, everyman presence to ingeniously charm his corporate sponsors into indicting themselves while making his MOVIE possible, complete with mini-commercials. It’s the same brilliant stunt documentary shtick that Spurlock’s previously employed in SUPER SIZE ME with a McDonald’s “diet,” traveled the Middle East to find out WHERE IN THE WORLD IS OSAMA BIN LADEN?, and then have truly unlikely people swap places for 30 DAYS on TNT.

And darned if the hard sell here isn’t just as effective in revealing how the advertising industry has truly invaded America in ways that the RED DAWN remake’s new North Korean invaders would envy. Sponsored by no less than pomegranate juice kingpins POM Wonderful, Spurlock’s GREATEST MOVIE EVER SOLD has a taste that goes down humorously smooth, but leaves a greatly disturbing aftertaste.

ASSIGNMENT X: Was there any kind of “advertising” epiphany that inspired you to make THE GREATEST MOVIE EVER SOLD?

MORGAN SPURLOCK: We got the whole idea for this film from an episode of HEROES where Hayden Panettiere was coming out of school, and her father gave her a Nissan Rogue. As he’s giving her the keys, the camera dollies past the logo on the car, racks zooms from the keys to her face, as she says, “I can’t believe it’s The Rogue!” Then in another episode, she’s leaving a party with her friends and says, “Come on everybody to the Rogue!” That blew me away. I came to the office, and started talking with my producing partner Jeremy Chilnick about how much we loved HEROES, and how it really started to jump the shark at that moment.

Then we started talking about all this unbelievable advertising and product placement that you’ve been seeing more and more in films, especially the two FANTASTIC FOUR ones. Mr. Fantastic unveils his new car and The Torch says, “Whoa, great car!” And he points to the hood and says, “A Himley.” It was so completely ridiculous. Advertising was co-opting the creativity. You’d have commercials right in the middle of movies! So Chris and I thought that it would be great to make a film that kind of rips open this world of product placement, then actually gets the brands to pay for its production.

AX: Part of the fun of GREATEST MOVIE is seeing you pitch these advertisers.  What was it like actually getting the money to even shoot those pitch sessions?

SPURLOCK: We paid for that.  It wasn’t like somebody gave us the money.  We were going out of pocket for about eight or nine months before the first brand even came on board.  Here you are burning through cash saying, “Is this going to work?  Are we even going to be able to pull this together?” The only thing that I think that really kept us going was that every time we would call an agency or a brand, the upper echelon of management would say, “Absolutely not! No way do we want anything to do with this. We already saw what you did to that other corporation in your movie. Why would we want to be a part of this?” But the people who worked underneath them would say to us, “Listen, I’ll do anything I can to help you that won’t get my fired.” There was this incredible ground swell of the people underneath that wanted to be more risky, who wanted to take chances, and wanted to entrust their brand to us.  For me, that’s why the people who actually took part in this film is remarkable, because they literally gave up a tremendous amount of control in letting us make this movie.

AX: There’s always a double-edged sword with documentaries like this. The advertisers think you’re on their side, but you really aren’t.  Essentially, THE GREATEST MOVIE makes fun of them as they’re buying into making it.

SPURLOCK: I think THE GREATEST MOVIE actually makes them look very smart, because it ultimately shows that they were ahead of the curve, and in on the joke in some way. That makes them come off lot better.  One of my favorite quotes that came from a person sitting in the front row of our premiere at the Sundance Film Festival. He said, “You know, I kind of want to go out and buy these companies’ products because they helped make the film. At the same time, I’m conflicted because I know that’s what the whole movie’s about.” And he was exactly right.

AX: Have you ever felt that you had to run right out and buy something after watching a movie or television show?

SPURLOCK: As a twelve year-old, I’d never wanted, or seen Reese’s Pieces before I watched E.T., but as soon as it was over, I felt that I had to get them in my house, gobble as many of Pieces as possible! Product placement was already setting in to my head back then.

AX: You look a lot better than Michael Moore, even after putting yourself on the McDonald’s diet.  You also seem to be a lot less strident as a documentarian.  Do you think, in a way, it’s the fact that you’re not doing the hard political “sell” that makes you more approachable, and likable?

SPURLOCK: I think it’s because I never tell people what to think, or what to do.  I like people to discover things on their own.  It was the way my TV show 30 DAYS was made, as well as SUPER SIZE ME and WHERE IN THE WORLD IS OSAMA BIN LADEN. I think you’re going on this vicarious journey with me. And hopefully there will be something that turns on a light in you somewhere along the way. I’m learning and experiencing as a filmmaker, and so are you along with me. I like that way of telling stories.

AX: There seems to be an optimism that pervades your work, as opposed to the ironic pessimism that Moore has at times, not that I don’t enjoy his films as well.

SPURLOCK: People can say what they want to about Michael Moore, but when he makes a movie, it becomes front-page news.  He literally creates a dialogue, which is everything you could hope for as a filmmaker. I just try to make something that’s for a wider audience. And I believe that if you can make somebody laugh, then you can make somebody listen. Michael Moore did the same thing with BOWLING FOR COLOMBINE and ROGER AND ME, both of those were very funny movies. He opened the door to somebody like me. I’m an eternal optimist. Gloom and doom can only get you so far; just ask Glenn Beck.

AX: There’s usually that scene in a Michael Moore film where he goes to a country like Canada or Cuba, and shows how great things are over there, compared to the United States. In GREATEST MOVIE, that place is Brazil, which has banned outdoor advertising, but don’t you think that’s wishful thinking? It’s never going to happen here.

SPURLOCK: The thing that I love about that scene is that it literally plants a seed that maybe there is that possibility.  It probably won’t happen in New York or Los Angeles, but could it happen in a smaller town, maybe some place like Austin, Texas that will get rid of outdoor advertising in the city limits.  I predict there will be some town that will embrace that idea.