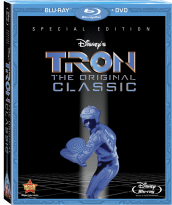 The remastered 1982 original looks better than ever and is a perfect compliment to the TRON: LEGACY sequel 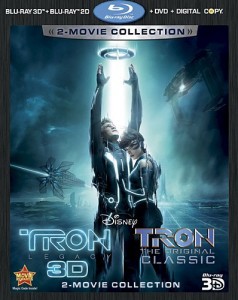 Perhaps the most anticipated film on Blu-ray this Spring  is not TRON: LEGACY, but rather TRON: THE ORIGINAL CLASSIC which is finally getting its long overdue Blu-ray treatment.

You almost expected Disney to put out the Blu-ray edition of the original before TRON: LEGACY hit theaters this past December, but alas, they didn’t and instead it gets included separately and also in a one-two home entertainment punch.

The amazing part though is the level of care that’s went into the remastering of the original 1982 TRON. The DVD release, while good, still was a bit murky when it came to the computer world and it just didn’t pop as it should have. In fact, it made you think that maybe TRON never really looked that good in the first place.

Now those blasphemous thoughts can be erased with this Blu-ray remaster. TRON looks like a completely different movie and even director Steven Lisberger admits this is probably the best the film has ever looked.

The story follows Kevin Flynn (Jeff Bridges), a video game arcade owner, hacker and former programmer for Encom that stole his video game designs. Flynn has been trying to hack into the system for awhile to prove what they did, but is thwarted by the super powerful MCP (aka Master Control Program played by David Warner).

MCP has been gobbling up programs and their power by forcing them to fight for their lives on the Grid. When Flynn pushes a little too far, he himself is sucked into the computer and it becomes the User vs. the Program in a visually stunning world. TRON (Bruce Boxleitner) is this world’s savior – he fights for the programs – and he teams up with Flynn to take MCP down.

Sure, there are some effects that definitely have that cheesy 1980s vibe, but put it into the perspective that THIS IS the 1980s in the film, it actually adds to its retro charm. Bridges is great as Flynn and his sense of humor is needed to take the viewer on this wild journey.

The special features include a look at the film’s include the film’s influence on pop culture plus the director and his son Carl dig through the Disney archives to look at material from when TRON was filmed. In addition, the exhaustive making of featurettes from the original DVD release also reprise on the Blu-ray.

For its time, TRON was a ground-breaking film that has stayed with the generation who grew up with it. Even if some of the computer references were over many people’s heads at the time, now, some of the humor and computer lingo is actually quite funny since it’s become part of our everyday vocabulary. Lisberger created a film that was, in many ways, ahead of its time, but also captured a time period in a bottle that brings back fond memories or arcades and simple video games. It also is a reminder that the influence of the summer movies of 1982 still lives on some three decades later.

For fans of both movies, the best bet is to own the 5-disc collection that includes both films on Blu-ray.