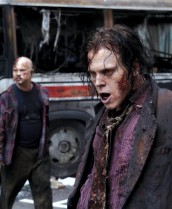 Forgive me for my obvious lack of judgment, but ten years ago, I had a conversation with someone about how zombies were not mainstream enough and no studio would even consider releasing a zombie movie as a major release.

How wrong was I?

From the uber-successful DAWN OF THE DEAD remake, the RESIDENT EVIL franchise,  28 DAYS LATER and so on, zombies are just as hot as vampires are and AMC has even greenlit a zombie series called THE WALKING DEAD based on the Robert Kirkman graphic novels.

What makes this so cool, and not some fringe show for gorehound geeks?

Well, THE SHAWSHANK REDEMPTION writer-director Frank Darabont developed the TV show, wrote the first two episodes and directed the pilot. The make-up effects are handled by the K.N.B. boys Greg Nicotero and Howard Berger and the show is on cable (AMC) where hardcore gore (and some sex) is perfectly acceptable.

Thankfully (yes, a major thankfully), I was wrong about the commercial viability about zombies, because THE WALKING DEAD promises to be an incredibly ambitious and wholly engrossing six-episode event (it made its debut, fittingly enough on Halloween night on AMC).

Yes, I was wrong. Zombies are hot. Super hot.

Hewing closely to the Kirkman graphic novel, the story follows cop Rick Grimes (Andrew Lincoln) who is shot in the line of duty and wakes up in an empty hospital all banged up and with no one around .

Soon, he discovers the world has gone mad (or dead), as zombies have become the predominant race in the United States and everyone else is their breakfast, lunch and dinner.

It takes awhile for Rick to get up to speed, but in the series premiere “Days Gone By” he’s taken in by a man named Morgan (JERICHO’s Lennie James) and his son who have holed up in a house next door to his. They’ve been planning to head toward a safe haven place everyone has been talking about – but first, Morgan must gather the courage to exterminate his undead wife lurking outside the house.

Rick, though, wants to find his wife and son, and fast. He believes they are still alive (he came home to find all their photo albums and clothes taken), so he’s going to head out on his mission immediately.

He travels to the big city of Atlanta, but, by episode’s end, he realizes he may very well be out-numbered by the zombie outbreak.

Director Darabont handles the first episode with a respectful pace for what is essentially a TV series. It clocks in at an hour and seven minutes, and it’s filled with the kind of nuanced drama Darabont knows how to script so well. It also has some great gore effects and some very chilling scenes. It deals with loss in ways zombie films some times gloss over and with six episodes, it’s clear some of the faces we come across will have major significance later on down the road.

Lincoln is solid as our protagonist. Rick is not perfect, he’s not a bad ass, he’s just a guy trying to find a way back to his family – it’s his journey which serves as the emotional center of the series.

Even though the graphic novel serves as the foundation, horror fans might have some issue with some of the similarities the pilot shares with 28 DAYS LATER and even the original RESIDENT EVIL. Again, this is a minor grievance, it’s zombies after all. And I’m sure there’s no way to get around future echoes of George A. Romero’s zombie canon that started it all.

THE WALKING DEAD also evokes the brilliant 1990’s mini-series adaptation of THE STAND. It has the same eerieness to it, and also a similar road trip-like structure, but with zombies instead.

Now that AMC has decided to pick the series up for a second season, it’s a shame they’re not staying with the six-episode structure. Six episodes can really provide a solid, steady and engrossing season. And as the first episode proves, it’s totally addicting television (something AMC has also proven to have a knack for with MAD MEN, BREAKING BAD and RUBICON) and to drag it on for 13 episodes at a time could potentially be a disservice to the storytelling.

THE WALKING DEAD promises that genre TV doesn’t have to be dull or pandering – and with such an incredible filmmakers like Frank Darabont and producer Gale Anne Hurd (TERMINATOR) on board this series, it proves that quality can reign supreme even when you’re dealing with ravenous flesh eaters.