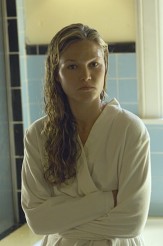 A great episode with lots of twists, reversals, action and introspection

“Everything is Illumenated” (the idiosyncratic spelling refers to both the character and the blood-illuminated substance) is a DEXTER episode in which a great deal, albeit not everything, is in fact illuminated. We see what gets under Dexter’s (Michael C. Hall) skin, we learn a lot about Lumen (Julia Stiles), we see the dangerous double game Quinn (Desmond Harrington) is playing and Batista (David Zayas) and LaGuerta (Lauren Velez) start communicating. All this plus two murders and baby Harrison’s first words make for quite a show.

Dexter plans to have a nice relaxing evening of killing a serial murderer, but his plans are interrupted when Lumen turns out to be in Miami. More, she’s shot a man who she believes to be one of her assailants, but the guy isn’t as dead as she’d hoped.

Deb (Jennifer Carpenter) gets closer to Quinn, who wants the relationship even though he’s also employed a shady ex-cop (Peter Weller), just busted by LaGuerta in an IAD sting, to dig up dirt on Dex. “Superhero nanny” (Dexter’s words) Sonia inadvertently complicates things further by patching Dexter through to his newly-talking son at a really bad time.

This is one of those episodes that makes DEXTER such a great show. Everybody has multiple goals and angles here. Lumen at first seems crazy, but it shown to be instead acutely perceptive.

Dexter is astonished to find that he empathizes with her because her trauma has added “the dark passenger” to her own psyche. Dexter surprises us by bringing Lumen back to his old house – and Lumen unknowingly shocks Dexter and us by taking a bath in that tub and reclining with her eyes closed. It’s a wonderful, potent moment that reminds us of what’s been lost and gives us insight into the stakes for Dexter here, without a word being uttered.

The A plot is nerve-wracking, darkly hilarious and beautifully resolved. We wonder how Dexter is going to juggle two not-dead intended victims without getting caught. The solution he invents is very clever.

This episode more than most lets us see horror movies from another side, where instead of fearing the unstoppable killer, we identify with him and worry that something will stop him. While much of DEXTER invites this sort of thematic reversal, it’s much more acute than usual in “Everything is Illumenated.”

There’s also a terrific set of switches with Lumen, who we first see as righteously wronged, then as scarily loony – and then as underestimated and remarkably perceptive. There’s a moment of acute audience satisfaction when it turns out that Lumen’s instincts are correct. When Dexter identifies her as a fellow carrier of the Dark Passenger, we feel for both of them. This storyline is pulling DEXTER and Dexter in directions we haven’t seen before on the series, and they are fascinating both in possibility and in practice.