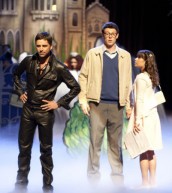 By taking on the seminal 1970s cult classic, the show not only brings the show back down to earth, it also creates an evergreen Halloween issue to boot

Knowing that GLEE was going to tackle the 1975 cult classic THE ROCKY HORROR PICTURE, I was a bit curious how they were going to make the show’s gender-bending adult material palatable for what is essentially a TV show about high school students.

Even with the pre-release of the soundtrack album (and some choice lyric edits particularly with the “Sweet Transvestite” song), it seemed like it might be playing things a little too safe.

However, “The Rocky Horror Glee Show” gets many things right – from actually moving certain story pieces along with the unrequited romance between Mr. Schuester (Matthew Morrison) and Emma (Jayma Mayes), but also giving every member of the cast a chance to really shine in their Rocky personas.

But, more than anything, the show itself wisely comments on the very same concerns about putting ROCKY HORROR on in any school setting, which leads to a very fitting and perfect ending (for a change).

The episode kicks off with Mr. Schuester realizing that Emma and her new dentist beau Carl (John Stamos) are actually perfect for each other. Carl is helping Emma overcome her O.C.D. which included him taking her to a midnight showing of THE ROCKY HORROR PICTURE SHOW (the movie where it’s usually shown in a theater with dirty seats, people spraying water pistols and throwing rice).

To compete, Mr. Schue decides to stage a high school production of ROCKY HORROR, to the horror, of well, just about everyone (okay, it’s not that bad).

The end result is actually pretty clever – where Finn (Cory Monteith) and Sam (Chord Overstreet) are the one’s who are more body conscious about being practically naked on stage than the girls. Eventually Carl decides to get in on the action by playing Eddie in the play (and conjuring up his inner acting diva) and Mr. Schue joins in too deciding he needs to make a play for Emma by taking over the lead of Rocky and asking her to rehearse “Touch A Touch A Touch A Touch Me” with him.

That latter part, is one of the showstoppers of the episode, because it is one of those rare instances lately where the song actually has meaning to the emotions going on in the show. And by having Santana (Naya Rivera) and Brittany (Heather Morris) singing back-up covertly in the background makes for one of the best choreographed moments in the entire episode. 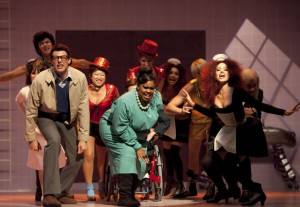 Director Adam Shankman brings out the fun from the entire cast – and even shows off the edginess in Quinn (Diana Agron) who really gets to break out of her shell and Mercedes (Amber Riley) who volunteers to play Frank-N-Furter.

Lurking in the background like a bloodsucking fiend is Sue (Jane Lynch) who gets encouragement from the new station managers (cleverly played by ROCKY HORROR PICTURE alums Barry Bostwick and Meat Loaf Aday) to take down the Glee club for using public funds to promote such filth as a ROCKY HORROR production.

All the songs chosen are perfect for a condensed ROCKY HORROR, and the show concludes with an awesome performance of “Time Warp”. It’s clear everyone works very hard on the show, but it’s also nice to see them have fun with such an anarchic showstopper as “Time Warp” where anything goes.

“The Rocky Horror Glee Show” brings back memories of the first half of last season where the story and songs work toward some emotional resonance, even if the whole Mr. Schue/Emma/Carl triangle is a bit blah compared to the one last year that involved Emma and Mr. Schue’s wife.