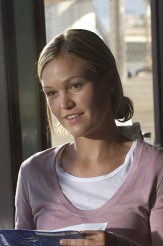 Before baby Harrison was even conceived on DEXTER, Dexter (Michael C. Hall) worried that any child of his might inherit his homicidal tendencies. It appears that Harrison, now ten-months-old, may have scratched the cheek of a playmate, drawing blood, which sends Dexter spiraling into anxiety.

Not that he’s all that calm anyway, what with assault/kidnap victim Lumen (Julia Stiles) wanting Dexter to help her kill her remaining assailants, a desire that almost leads Dexter to mistakenly take out the wrong man.

Meanwhile, Quinn (Desmond Harrington) persists in his quest to tie Dexter to the mysterious Kyle Butler (the alias Dexter used to get close to the Trinity killer) and Batista (David Zayas) almost screws up a sting operation in his jealousy over what his wife/boss LaGuerta (Lauren Velez) may be doing to save her husband’s job. Deb (Jennifer Carpenter), continuing to investigate the Santa Muerte murders, finds clues in a very messy, maggot-infested murder scene.

“First Blood” is a strong DEXTER episode, with multiple story threads moving things forward while at the same time there are little comic/tragic touches. Dexter’s concern about what Harrison may or may not have done – and his wry awareness that he may be over-reacting at the same time he can’t help it – is genuinely funny.

Lumen’s quietly reverberating fury is both tragic and alarming. Part of what works so well in “First Blood” is the way Dexter’s fears about Harrison and Lumen serve as weird mirrors to one another. There is the merest hint, not hammered on in any way, that because Dexter genuinely loves his son and wants to protect him from becoming, well, Dexter that Lumen is the unknowing recipient of spillover emotion. Since Dexter barely believes he experiences emotion at all, he has little self-awareness of how his feelings toward his son may be affecting his sense of responsibility toward Lumen. Because the situation is so strange for both Dexter and the audience, it’s simultaneously suspenseful and wide-open – we recognize all the dangers without having any guess as to where it will all wind up.

Carpenter continues to make Deb one of TV’s least self-righteous, most intriguing and dedicated working women, always credible as someone who lives and breathes for her job. The Santa Muerte murders provide a satisfyingly dense procedural storyline. Quinn’s actions lead to the cast addition of Peter Weller, playing a disgraced cop with such menace that we can’t wait until he and Dexter lock horns.

“First Blood” has rich characterizations and multiple engrossing narrative threads that keep us engaged with what we’re watching and dying to know what happens next.