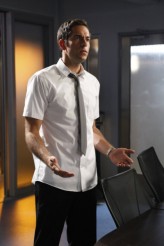 This season’s Big Bad is finally revealed, in a good, but super-obvious episode

Well, we’re back to relationship woes as a centerpiece on CHUCK. In “Vs. The First Fight,” it’s all about Chuck (Zachary Levi) and Sarah (Yvonne Strahovski) having their first big fight as a couple.

The problem is, it’s not really that big of fight. Sarah arrested Chuck’s turncoat spy mom Mary (Linda Hamilton) and didn’t tell him. That’s not a fight, that’s betrayal. Get your emotions correct. She did it to protect Chuck, but we have to suffer through another one of those poorly constructed episodes where Chuck and Sarah’s personal problems are more significant than the actual show as a whole.

It really sucks, sorry, but can’t the writers find a more organic way of shoehorning this stuff in?

With Mary Bartowski in custody, Chuck wants to prove her innocence, and gets intel from her that she needs to connect with her handler – a rough-around-the-edges M16 agent Gregory Tuttle (played by former James Bond Timothy Dalton).

Chuck pals around with Tuttle after getting kidnapped by the henchmen of unseen Big Bad Volkoff.

Overall, “Vs. The First Fight” is an okay CHUCK episode. The unlikely partnership of Casey and Morgan (Joshua Gomez) is one of the best pairings on the show now. Their constant bickering and bantering adds a welcome respite on the show from the Chuck/Sarah relationship crap.

The constant back and forth of whether or not Mary is a good spy or a bad spy is starting to wear thin, but now that we’ve been introduced to Volkoff, it should set up an entirely new dynamic in weeks to come.

Chuck has also been de-programmed as the Intersect (by his mom no less), so it should be interesting to see Chuck being a spy without super powers for a couple weeks (at least).