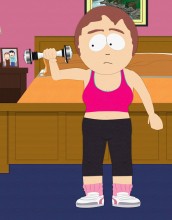 Thinking she’s undesirable, Sharon goes to the store to pick up some exercise equipment so she can get in shape, which leads her to a voice activated Shake Weight.

Anyone who has seen the suggestive commercials for this product, know exactly what these Shake Weights are all about, and SOUTH PARK plays right into them (in their version, when a work-out is done, it sprays water in your face – HINT HINT!).

The episode is all over the map, but builds to an okay conclusion that ties everything together. However, everything else is a bit too pat and the jokes are rather one-note for SOUTH PARK, but I guess after the three-week epic “Coon and Friends” arc, sometimes not being ambitious is the only way to go when you’ve just created epic battles and massive destruction.

It’s amusing how this subplot is quickly jettisoned for the pay-off at the very end (not all shows need closure to every single plot thread), but again, I wish more time was put into coming up with more jokes.

Hey, at least it wasn’t another Cartman-centric episode, though I have to give props for Cartman pretending to be Gordon Ramsey — definitely a highlight in an otherwise unexceptional episode.