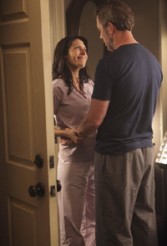 House and Cuddy are an item, but will that take the edge off the show?

Well, it was real. Huddy (House + Cuddy for you folks out there not in the know) is happening, and to be honest, I’m not sure how I feel about that as HOUSE enters its seventh season. I suppose it would have been utterly ridiculous to have House (Hugh Laurie) and Cuddy’s (Lisa Edelstein) encounter be another hallucination or a dream or any other DALLAS type ending. At the same time, their relationship seems to undermine everything House was trying to accomplish during season six.

“Now What?” was definitely slow by any standards, but that was due to this being a setup episode for the rest of the season. There was a lot that needed to be explained; a chance to lay down the ground rules, so to speak. The result was a season premiere that was atypical for a HOUSE episode, and may leave many wondering where season seven is going.

“Now What?” picks up right where “Help Me” left off, with House and Cuddy embracing. It’s clear from the get go that their relationship is in fact a relationship – one that should provide much of the dramatic fodder for the season and not just an impulsive one night stand.

Correction, I mean “not just a one night stand”. There’s plenty of impulsiveness being casually thrown around, one that doesn’t seem to respect the characters we know and respect. That is one major source for the hesitation I feel about embracing this new House/Cuddy dynamic. Cuddy blows off the hospital, her fiancée, her daughter, and everything else of importance. It’s so irresponsible, so selfish, and so unsophisticated, it makes it hard to believe this is the same assertive, decisive, and strong woman of the last six seasons.

House seems to have completely changed as well. He is caring, charming, and downright pleasant, a far cry from the House of past. There is no tension in his life, no bite in his words or malice in his being. It’s the end of the movie, or so it seems, which begs the question, as HOUSE has already posited, now what?

Now what indeed. The answer to this question is the reason we have such a plodding episode. In a brilliant move by the writers, we have, in one short hour, gone through the entire honeymoon phase of House and Cuddy’s budding relationship. Such perfect bliss is rarely fun to watch (or easy to stomach, for that matter) but it had to be done. Huddy is here to stay for the foreseeable future. The euphoric early stage is already over. Next week is when season seven really begins.

As hard as it was to watch this love fest, we did learn one thing. Contrary to what was written two and three paragraphs ago (go ahead, I’ll wait for you to reread them), House and Cuddy really haven’t changed. House is still a deeply flawed human being, still very capable of snide and hurtful remarks. Cuddy is still the hospital administrator, and despite one day of playing hooky, her devotion to the hospital is unquestionable. House will still try to bend the rules to save the life of his patient. Cuddy will still be the enforcer of hospital policy. They will still be at each other’s throats. The only difference now is that they have their relationship to think of, or as is sure to be the case, to ignore.

This is a new HOUSE, and it’s definitely a different HOUSE than we’ve seen in seasons past. Certainly some people will love that House and Cuddy will finally get the chance to explore their feelings for each other. Others will still be leery, calling this another case of cast inbreeding. I’m still on the fence about Huddy. It’s change, and sometimes change is good, but I’m not entirely convinced of that in this particular case.

As a premiere, “Now What?” barely resembled a HOUSE episode, but the writers had the bigger picture in mind for this one. Ultimately, “Now What?” can only be truly appreciated in context. This may the start of something great. This may mark the end of the quality television we’ve come to expect from HOUSE. The rest of the season needs to unfold before any real verdict can be cast.