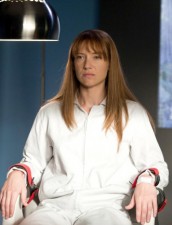 Wow, well FRINGE really knows how to deliver the goods right from the get go.

At the end of the second season, the Fringe team had crossed over to the other side in order to not only rescue Peter (Joshua Jackson) who they believed had been kidnapped but to learn what the alternate universe was doing in terms of the war brewing between them and our world.

Along the way, we lost (supposedly) our Olivia (Anna Torv) and she was replaced with the alternate version – Dark Olivia. We left Olivia trapped by Dark Walter (John Noble) that is also the alternate universe’s Secretary of Defense. He sent Dark Olivia to our universe in order to not just gather info but for a purpose we have yet to know. But we know this much, it ain’t for good.

But the season three opener of FRINGE focused more on our Olivia in the alternate universe. At the beginning, she knows who she is and fights the power – breaking free and aligning herself with a friendly cab driver that at first she forces to help her but along the way he believes her. Unfortunately, Dark Walter had planned for such an event and sent his cronies and the alt-Olivia’s partner (that got torched by the Fringe team when they crossed over) to plead with her to stop her running because she was just suffering from memory loss. Olivia even had a tattoo that the alternate version had conveniently on her.

It worked, and our Olivia now firmly believes that she’s a member of the alternate universe and we will see where it goes from there.

We also get a glimpse of what’s happening in our universe as Walter and Peter begin to get on with their lives thinking everything is just as it should be – including a budding romance between Peter and Olivia.

I like that they are going to focus on both universes in season three. One of the highlights by far was the final two episodes of the season that showed us every alternate version of the cast we had grown to know in two seasons. Now we will be able to see them more in action and see just how different things are “over there” as a result of Walter transporting himself there so many years ago to save Peter.

And meanwhile, we’ll see our familiar faces having to deal with a mole in their midst and when/if she decides to usurp their group. Obviously, she has an agenda and she’s still working with Thomas Newton for some agenda (that’s the guy who had his head frozen then reattached in Season Two and brought over Dark Walter to bring Peter to the alternate universe).

Good stuff and we are already off and running on one of TV’s best shows.