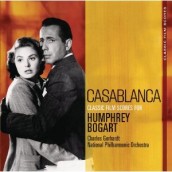 The 1970’s were a renaissance for film suite compilation albums, as young LP listeners were introduced to the works of such Hollywood scoring legends as Bernard Herrmann, Miklos Rosza and Franz Waxman. But no great re-performance of these golden age masters functioned as the gateway drug for film music appreciation like the RCA Red Seal Classic Film Score Series, which had Charles Gerhardt conducting The National Philharmonic Orchestra.

With the original movie orchestrations under his baton, and enticingly designed album covers to sell these ambitious releases, Gerhardt and series producer George Korngold (son of Erich) conjured a wash of infinitely lush strings that made the romantic sound of the studio system come alive for a new generation of melody-loving listeners.

What united these albums’ pitch-perfect selections from the likes of CAPTAIN BLOOD, THE CAPTAIN FROM CASTILLE, KEY LARGO (and even such newbies as AIRPORT) was a gloriously florid approach that showed how a bunch of Eastern European expatriates used their classical training to create a similarly operatic sound for Hollywood, full of soaring choruses and rich leitmotifs, music that was virtually wall-to-wall during the cinema’s “good old days.”

While there might not be much in the actual way of underscoring here, Gerhardt had a way of finding each classic score’s greatest hits, then collecting those themes into punchy suites. There’s a true, lovingly nostalgic panache to his renditions. Yet Gerhardt also brought out a fresh vitality from these masterpieces, filling impressionable ears with the true, sweeping imagination that can be conjured from great film music. Though Gerhardt never appeared in front of an audience to conduct, his glorious work set the gold standard for any live symphony doing a classic film music night.

Sony Masterworks has done a spectacular job of re-mastering six of the fourteen Gerhardt “Classic Film Score” series- albums devoted to Erich Wolfgang Korngold, Max Stein, Alfred Newman, Dimitri Tiomkin, a CASABLANCA-topped collection of music from Humphrey Bogart films, and the romantic grand-daddy of them all, GONE WITH THE WIND. For fans of a certain age, and anyone interested in classic movie music, these “new” albums (complete with their original liner notes by Tony Thomas) show how no producer, and conductor captured the musical magic of yesteryear with the symphonic sweep of Charles Gerhardt.