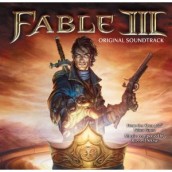 Fun music for the world you create

Having composed the last two scores for this series of particularly malleable role playing games, Russell Shaw returns for the third chapter of FABLE. And as you chose whether to save, or squander your fantasy kingdom of Albion, Russell is there to weave an uncommonly rich tapestry of melodic enchantment.

Not only does he give you the heroic orchestrations, brass heraldry and female choruses you’d expect from any videogame quest, but also offers some nice unexpected bits, from Gypsy violin playing to the off-kilter bells of a music box and Greensleeves-like guitar strumming.

Whether Albion ends up in riches or rags by the end of your crownship, Russell Shaw thankfully gives listeners only one, powerfully thematic path for this soundtrack, conveying the kind of fun majesty every role player must have heard in their heads since the days of dungeons and dragons.