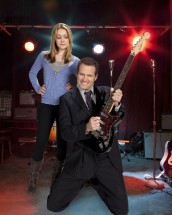 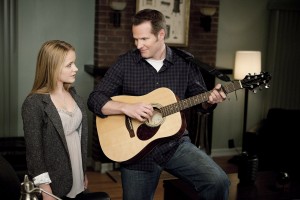 In Hallmark Channel’s original movie ROCK THE HOUSE (which airs tonight), lawyer Max, played by Jack Coleman, finds a way to reconnect with his daughter and his old sense of joy when he gets back together with his music-making friends from his teenaged years.

Coleman in fact has a musical background – he’s been on Broadway – but he’s perhaps best known lately for playing Noah Bennet, aka HRG (Horn-Rimmed Glasses), the Man with the Plan, on four seasons of HEROES. Lately, he’s had a recurring role on THE OFFICE as a Senator dating Angela (Angela Kinsey) who may be using her as a beard. At a party for Hallmark, Coleman happily steps to the side for a few minutes to discuss all of the above.

ASSIGNMENT X: What is ROCK THE HOUSE about?

JACK COLEMAN: Cassi Thompson – she’s on BIG LOVE – plays my daughter. I play an overworked lawyer who has been estranged – his daughter lives with him on weekends, but they have a very strained relationship. He gets back together with his old high school band. Slowly but surely, through the music, father and daughter reunite.

AX: You played Danny Zuko in GREASE onstage when you were starting out as an actor. Does this hark back to those days?

COLEMAN: It does hearken back to my GREASE days, actually. I don’t think I’ve ever had more fun. I get to sing and play guitar and it’s like a musical, so it’s great fun.

AX: What style is the music?

AX: Is it a cover band, or do they write original songs?

AX: Is it you actually singing and playing?

COLEMAN: I am actually singing and I am actually playing, though most of the guitar work is somebody else. The stuff you hear me playing live on acoustic and some of the stuff on guitar is me, but most of it is a professional guitarist.

AX: Do you wear torn t-shirts and jeans in the role?

COLEMAN: I get to wear a black leather jacket with the name of the band on the back. It’s two other guys – Andy Milder from WEEDS, who’s my best friend, and David Permenter, who’s my buddy Pete, and he’s the drummer. 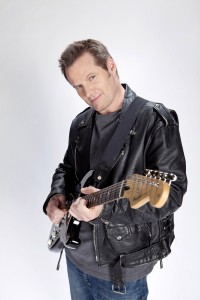 AX: Is the daughter character in the band as well?

COLEMAN: She isn’t in the band. She turns out to have a hidden musical talent that she’s very shy about. She writes this song that I put to music – we end up singing it together at the end. It’s very sweet and it’s a lot of fun. I actually just watched it for the first time. It’s really good. I was very happy with it.

AX: You’ve turned up in a few guest roles this past season …

COLEMAN: I was on HOUSE, I was on THE MENTALIST, and I’m doing sort of a recurring [character] on THE OFFICE. [On THE OFFICE], I was Angela’s boyfriend and now a state senator who may or may not be gay. I’m just hoping it’s going to be one of those “Guy gets arrested in an airport bathroom” kind of things. If we’re going to make him a state senator with a secret, let’s make it a big dirty secret.

AX: Do you have a good time working on THE OFFICE?

COLEMAN: Oh, my God, yes. It’s such a lovely group of people and I think it’s probably the most comfortable, most welcoming set I’ve ever been on as a guest star, so that’s saying a lot.

AX: Had you been doing any guest roles during HEROES, or is this all since HEROES?

COLEMAN: That’s all since HEROES. This movie was since HEROES, too. It’s all post-HEROES.

AX: How has it been getting back into the swing of playing a bunch of different characters?

COLEMAN: Playing a bunch of different characters is no problem. Not having a series to just go to every day with a familiar cast and a familiar crew – being a guest star is always awkward, always, no matter who you are, no matter how great the part, and sort of being out there in the world, trying to figure out what the next big gig is, is not one of the most fun parts of being an actor, but that’s the circus that I signed up for.

AX: How did you feel about the way HEROES ended?

COLEMAN: Nobody quite knew if it was the end or not, so they needed to wrap it up without entirely wrapping it up, and in that sense, I think they actually did quite well. The hard part was, are we going forward? Is there going to be a movie? Will there be more episodes? I mean, I actually think the ending with Claire jumping off [a high perch] and saying, “This is attempt number I don’t know, I lost count,” I thought that was very fitting, going back to [a similar scene in] the pilot, but it’s very difficult when you don’t know if the show’s over or not.

AX: Was there a different way you would have liked to see HEROES end?

COLEMAN: The different way I would have liked to see HEROES end was to see it not end. I understand it was an expensive show, times have changed, things happen, but had we known that was it, I think it would have been a very different episode. But nobody knew.

AX: In the not-ending ending, your character HRG had a great death scene that turned out to be a, “Wait, I’m not dead” scene. Do you think HRG would have survived an ending where they knew that it was ending?

COLEMAN: Probably not, no. That probably would have been it. And I think it would have been fitting, that his mortality actually brings him down and Claire goes on to survive him.

AX: Were you sorry that HRG’s onscreen marriage to Sandra, played by Ashley Crow, broke up or did you enjoy his subsequent flirtation with his coworker, played by Elisabeth Rohm?

COLEMAN: I think that the marriage breaking up and Liz Rohm – I think that was a good storyline. I would have liked to have seen the marriage stay more [in the story] – like the weirdness of that Thanksgiving episode [where Sandra brought her new boyfriend along], I think it would have been nice to see some of that still in play, is he going to be with Sandra or is he going to be with …? Sandra kind of went away once they brought in Liz.

AX: Back to ROCK THE HOUSE, how is the pace of shooting a Hallmark movie? Is it faster than HEROES?

COLEMAN: Oh, much faster. Which is really interesting when you’re doing a musical, because I had to learn six songs or so, had to play them on the guitar and it’s not like you’re doing CHICAGO – this is done quickly, on a budget, and there’s a whole lot to be done in a very short amount of time.

AX: Do you sing on your own at home?

COLEMAN: I sing all the time, I always have, I’ve sung on Broadway – I was a singer. I had to get the pipes working again, but that’s always fun.