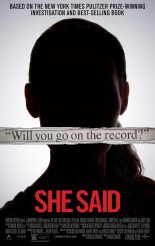 How they got that (Weinstein) story 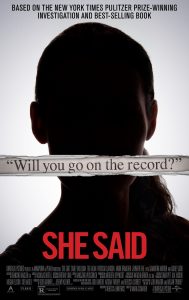 SHE SAID takes its title from the expression “he said, she said,” which is, sadly, still how rape cases are sometimes viewed. But the “he” in this instance is Harvey Weinstein, a sexual predator who so many women spoke out against that what “she said” was taken seriously.

By now, there can’t be too many movie watchers who don’t know a) who Weinstein is, b) what he did, and c) that he’s now in jail. SHE SAID is a dramatized chronicle of the journalistic reporting that helped put Weinstein in prison.

In 2017, veteran New York Times reporter Megan Twohey (Carey Mulligan) and relative Times newcomer Jodi Kantor (Zoe Kazan) joined forces to look into allegations that Weinstein had been sexually inappropriate with some of the women, both performers and staff, who had worked for his studio, Miramax.

SHE SAID is directed by Maria Schrader and scripted by Rebecca Lenkiewicz, based both on the reporting of Kantor & Twohey & New York Times editor Rebecca Corbett, and the book SHE SAID, written by Kantor & Twohey. It is a solid, respectable, and respectful movie about a journalistic investigation that helped spark a legal case that led to a conviction.

Given that the conclusion is well-known, SHE SAID does its best to give us the humanizing details, with Twohey suffering from post-partum depression after the birth of her first child, and Kantor already juggling marriage and two kids in an observant Jewish household.

Kantor and Twohey cope with multiple setbacks and frustrations as they try to get women to go on the record. People don’t want to speak out, either because they are afraid that Weinstein will destroy their careers, because they don’t want family members to know what happened, because they’ve signed non-disclosure agreements, or some combination of all of the above.

SHE SAID is at something of a disadvantage when compared to some other fictionalized sagas of real-life crusading journalism. ALL THE PRESIDENT’S MEN and THE POST had the reporters and their sources in danger of Federal prosecution, or worse. SPOTLIGHT, while it lacked this threat, at least had a direct connection between the crimes being investigated (a massive cover-up of sexual child abuse by Catholic priests) and others around the world, giving it global weight.

While Weinstein’s case did help trigger the #MeToo movement and led to Hollywood at least theoretically treating the issue of sexual predation with more gravity, we don’t get a sense here of larger stakes. It would seem heavy-handed if the film’s Twohey and Kantor were to speculate on where their reporting might lead, so it’s good that they don’t.

Without this, however, it’s down to the immediacy of getting a story on Weinstein. We loathe him reflexively, but when we encounter him in the film (Mike Houston supplies his voice and plays him as seen from the back), he comes off as almost absurd in his bluster. Weinstein could at the time ruin a performer or a film industry talent, but there’s only so much he can do to the New York Times. The paper’s executive editor Dean Baquet (Andre Braugher) makes it clear that he’s more exasperated by than fearful of the man.

Consequently, we sympathize with the people Weinstein has victimized, but the biggest jeopardy seems to be to the reporters’ mental well-being, which is never truly in question. There’s also mention (calling it a subplot would give it too much heft) of wanting the article to be published before the Times gets scooped by a similar piece Ronan Farrow is working on for The New Yorker. We know that it’s a big deal for Kantor, Twohey, et al, but from an outside perspective, an article from another source can only help the Times’s credibility.

Mulligan and Kazan are wholly credible as the reporters. Braugher and Patricia Clarkson as their editors both exude the confidence of people in control of their surroundings. Jennifer Ehle and Samantha Morton deliver compelling performances as two of the many women who eventually speak with Twohey and Kantor, and Ashley Judd appears as herself.

SHE SAID is intriguing and moves along at an acceptable pace. It just seems like there might have been a way of telling this story that made us feel its importance more than does the postscript we get at the end.