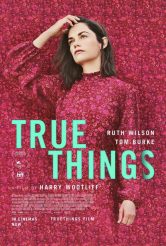 A well-acted but slow character study 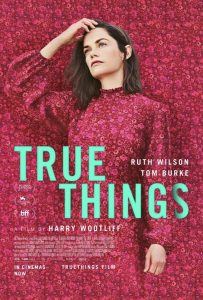 Release Date: September 9, 2022 Ruth Wilson is an always watchable performer. No matter what she is doing, she is vital and committed, and we believe her. As she’s in almost every frame on TRUE THINGS, this means the movie always has life, even if Wilson pretty much carries it on her back.

In TRUE THINGS, Wilson plays Kate Perkin, a government worker in an office, assisting people on welfare or newly released from prison. She’s been late for work a lot – from what we see of her job, we can’t much blame her. Then a fellow referred to in the credits as Blond (Tom Burke) shows up at her desk. He’s an ex-con who did four months for what he describes as a truck accident. He’s flirtatious, attractive, and a change from everything in Kate’s world. When Kate gets off work, he’s waiting for her outside, and they wind up having sex in a parking structure. It’s rough enough that Kate’s head gets banged against a cement pillar. They both want to see each other again. Despite the rules against not becoming involved with clients, it’s clear that Blond is by far the most exciting focal point in Kate’s life. Blond keeps whisking Kate away from work. This might not be so bad for her, except then he begins behaving erratically. Kate tries to accommodate Blond, but begins to spiral into depression. She’s got nothing else going on in her life. She’s resistant to help from her loving but uncomprehending parents (Elizabeth Rider and Frank McCusker) and from her married friend Alison (Hayley Squires).

Director Harry Wootliff, working from a screenplay he co-wrote with Molly Davies, has the camera deliberately go in and out of focus, underscoring Kate’s mental state. It’s an effective visual cue. In the hands of the filmmakers and Wilson, TRUE THINGS is a persuasive portrait of obsessive misery and boredom. Burke is very good at giving us an elusive figure who could equally be genuinely dangerous, or just hugely self-absorbed. Unfortunately, like a lot of movies where boredom is central to what’s happening, TRUE THINGS often winds up not only depicting but inviting that condition. We can understand why Kate is so upset, and we believe her, but it’s neither enjoyable nor educational to feel trapped alongside her. 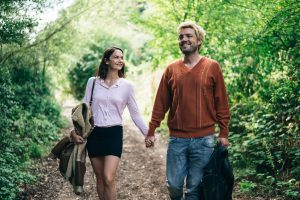 Having read only descriptions but not the source material itself, Deborah Kay Davies’s first-person novel TRUE THINGS ABOUT ME, it’s not possible for this reviewer to state with certainty how close TRUE THINGS is to the spirit of the book. However, in the film, Kate isn’t in some general desensitized state where she’s seeking an anonymous “him” to wake her up. We see her look up the man’s name on his office paperwork. She definitely doesn’t think of him as “Blond,” but that’s the name he’s given in the credits, and she never speaks it aloud. Even odder, actor Burke’s normal hair color is dark brown. The blond locks appear to be a dye job on the character, which in turn makes a statement about him – which would be fine, except that this poser aspect doesn’t fit how he otherwise tries to present himself.

TRUE THINGS never pulls these elements together for us. The result is we’re not sure if the filmmakers intend to send mixed signals on this and some other aspects, or if they’re just trying to be true to the book in ways that don’t jibe with the movie. Another example of this is a sequence where Kate goes on a date, set up by Alison, with a fellow who is meant to be “normal.” Kate starts drinking hard and invites him to have sex with her in his car. In the book, this scene (as described in reviews) is meant to show Kate chasing away any chance at disentangling herself from Blond. In the film, though, it seems more like Kate is seeking sexual validation from another man on her own terms, which might allow her to break free of Blond. It can often be exciting when a film is open to interpretation, but TRUE THINGS seems to be unsure of whether it wants to be felt, or simply observed. The finale of TRUE THINGS is gratifying, but the journey getting there is recommended mainly for staunch fans of the performers and/or slow-burn character studies.