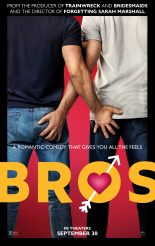 A disarmingly charming gay romcom (from a major studio) 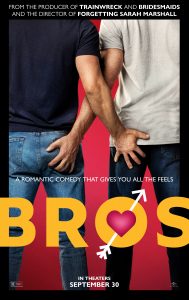 There are, by now, lots of gay romcom (and dramatic, and satiric, and everything else) movies out there. However, BROS is (to this reviewer’s knowledge) the first major studio release to put gay male romance, and sex, front and center. It’s surprising not so much because it exists, but because how often it scores comedically and emotionally.

Billy Eichner, who co-wrote the screenplay with director Nicholas Stoller, stars as Bobby, a fortyish New York writer, podcaster, and gay historian. Bobby is proud (or at least thinks he is) of his never-been-in-love status. He hooks up for one-afternoon stands with fellows he meets on Grindr, never to see them again. Then, at a gay bar, he meets Aaron Shepard (Luke Macfarlane, a veteran of many heterosexual Hallmark romcoms). Aaron is super-buff, a former athlete from a small town. Bobby instantly sizes Aaron up as a muscular meathead only interested in fellow athletic types. But Aaron is interested in Bobby, and has hidden depths. Now Bobby decides that Aaron is emotionally unavailable, but that’s okay, because Bobby is, too. But … So, can these two guys get past their separate insecurities and preconceptions and stay together?

BROS doesn’t break the fourth wall, but it seems pretty much like the movie Bobby says he wants to make is the movie we’re watching – at least until the possibility of actual love rears its head.

Here, BROS doesn’t entirely avoid the tropes and traps of romcoms throughout eternity, but it earns them honestly. The conflicts threatening to tear our heroes apart are real, recognizable issues rather than easy contrivances. More, the script by Eichner and director Stoller has some scenes that are gut-bustingly funny.

Anybody who has ever been involved with a political progressive organization will recognize Bobby’s adventures with the very diverse board of a proposed LGBTQ+ museum. This allows for an added bonus: gently layered history lessons about the LGBTQ+ community. There is genuine respect for everyone, seen in the diverse casting and in the writing. The lesbian, trans, and nonbinary characters all score points.

The straight friends are true allies. Bobby is always quick to acknowledge that, while he faces discrimination as a gay man, he still has the privileges that come with being male, white, and cis-gendered. Everybody comes across as multifaceted, decent, and human. More, Aaron’s quirks are unexpected, and there are some wonderful gags with game gay icon celebrities playing themselves. (Mild spoiler alert: is Kristin Chenoweth’s costume at an awards gala a parody of Florence Pugh’s iconic MIDSOMMAR outfit? Discuss.)

The specific aspects of some gay men’s lives do differ from those of most straight people (and lesbians, for that matter). Stoller shoots these sequences calmly, with a sense of humor in the situation, but not making fun of the participants. In other words, there are a lot of hard-R sex scenes. They’re not gratuitous, all of them make plot points, and they’re no more or less graphic than we’d expect in a movie starring a man and a woman.

After making a bombastic first impression, Eichner as Bobby grows on us. The writing and performance both allow for increasing self-awareness and vulnerability, without an unrealistic epiphany that would turn the character inside out. Macfarlane has a pleasingly relaxed demeanor, adroit comedic timing, and gives Aaron a sense of sweetness.

Standouts in the terrific supporting cast include Amanda Bearse as Aaron’s mother, Bowen Yang as an entertainment magnate, and Miss Lawrence as a determinedly beatific museum board member. BROS is smart, charming, erudite, good-looking, and fun. What more can we ask from a date, or a date movie?