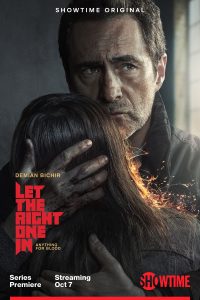 In the new series LET THE RIGHT ONE IN, now in its first season Sunday nights on Showtime, Anika Noni Rose plays Naomi Cole, NYPD homicide detective and devoted mother of twelve-year-old Isaiah (Ian Foreman). Naomi is happy that the normally lonely Isaiah has made friends with Ellie (Madison Taylor Baez), the little girl who has moved in down the hall with her widowed father Mark (Demián Bichir).

What Naomi doesn’t know is that Ellie is a vampire, and that Mark kills in order to feed his daughter. Meanwhile, Naomi is investigating a series of brutal murders that we know (although Naomi doesn’t, at least yet) are being committed by a much older vampire.

Andrew Hinderaker adapted LET THE RIGHT ONE IN as a television series, after the original 2000 novel by Swedish John Ajvide Lindqvist was first adapted as an influential Swedish-language film in 2008, and remade as an American film, Let Me In, in 2010.

Rose won a Tony Award for her performance in the musical CAROLINE, OR CHANGE in 2004. She is also beloved for voicing Tianna, the first Black Disney Princess, in the 2009 animated feature THE PRINCESS AND THE FROG. Rose’s many other film and television credits include THIRD WATCH, DREAMGIRLS, THE NO. 1 LADIES’ DETECTIVE AGENCY, BAG OF BONES, SOFIA THE FIRST, BATES MOTEL, POWER, VIXEN, BEAST MODE, and THEM.

Over a Zoom call arranged by Showtime as part of the Television Critics Association (TCA) press tour, Rose discusses playing a woman very conscious of the work/life balance. This interview also incorporates comments Rose gave at Showtime’s TCA Q&A for LET THE RIGHT ONE IN, which ended approximately twenty minutes before the exclusive interview began.

ASSIGNMENT X: What would you say the balance is in Naomi’s life between parenting and policing?

ANIKA NONI ROSE: I think those worlds overlap for her. Because she is a single mom. What she does is make sure that her child knows that he is central in her heart, and that he comes first and foremost in her life. But she’s still a working single mother, and has to figure out who’s going to take care of her child. She knows that he’s being bullied. She’s tough. She’d love to put those kids in handcuffs, and teach them a lesson. She cannot, so she has to find ways to deal with that as well. I can’t give you a percentage, but I will say, I think it changes day to day, depending on what’s necessary, depending on what my child needs, and depending on what my job needs. That changes. 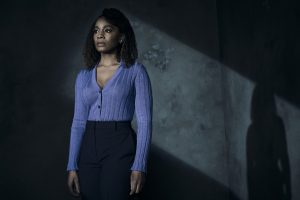 AX: Do we know how long Naomi has been a single mom? Obviously, Isaiah has a relationship with his dad, who is Naomi’s ex …

ROSE: Yeah. It hasn’t been very long that they’ve been divorced, but they have been separated for some time, because he was dealing with his issue, which is something that she can’t have around her child, in her life, at all.

AX: How do you feel about how Naomi is written as a character?

ROSE:  Well, it ushered me into the role, because if she was written the way moms in these things usually are written, you would be looking at someone else on the screen right now. I think that not only are they written in ways that they miss what’s going on, they’re written in ways that they end up being daft. And that’s tiresome to me. Clearly, there are people in the world who are daft. But mothers, when it comes to their children particularly, any kid will tell you that they think their mother has eyes in the back of their head.

I love that this woman is a hunter [of killers]. She is extremely intelligent. She loves her child and would do anything for this kid, to the point where she ends up hurting his feelings trying to protect him.  So, she is so many things all wrapped in one. That that leads to something very interesting, because sometimes she makes a decision for the reason of loving her kid, and it’s at odds with something else. Or she’s a police officer, so she doesn’t have time for particular things.  That’s at odds with the love that she has for her child. So now I have to go do something for my kid that I don’t really even want to do because I don’t understand it. Like parents do. Like people do.

So, I find her intriguing in the way that she’s like a kaleidoscope. Depending on what the day brings, what the light is, how it comes through the window, you’re getting a different aspect of this person. And that’s really enjoyable to me, because it allows me to play someone who is constantly shifting. Of course, she has a center that pretty much stays the same, but she’s in flux at all times and juggling at all times how to be the best that she can be in what she’s doing, because she’s also got an A type personality, so that’s a lot. And I love that it’s a lot, because I think that often mothers are written in ways that, as an actor, you don’t even want to hear about the mother role. So, I’m glad that she is somebody who is multifaceted, who is dealing with her own issues, who is tortured with her own things, but also has the capacity for great, strong, intense love, which makes for really good decisions and really bad decisions all in the same space.

AX: You’ve played an FBI agent before on BATES MOTEL, which is another series where some strange things were happening, although maybe not quite so strange as on LET THE RIGHT ONE IN. Was that in any way good preparation for this?

ROSE: It was not, because I actually barely did anything on that show. [laughs] But POWER was, because I did play a detective on POWER, so I learned a lot about policing, even though she was very bad, she was a murderer. I learned gun work, and things like that, so that actually was good prep for this.

AX: How much does Naomi have to expand her sense of reality to accommodate what’s actually going on in her world?

ROSE: Well, I think as a homicide detective, she is somebody who sees horrific things all the time. This becomes so above and beyond what she normally is seeing. But she is a police officer, so she accepts reality as it comes to her. Even when she knows that it’s something that is out of bounds and wild and strange, she’s looking at facts. She’s a logical person. She’s looking for the facts. That’s where she stands.

AX: So, she’s not letting preconceived notions get in her way of the truth …

ROSE: I don’t believe so, but she doesn’t know all of the truth yet. She’s putting it together as she goes. We’ll see as we go along what the hell does that mean [laughs], but she’s figuring it out.

AX: How does she react to her new neighbors, Mark and Ellie?

ROSE: I think the fact that she is a cop means that she is potentially more watchful than your average neighbor is going to be. There are things that she notices.  [Mark] and Eleanor thinking that they have found a place where they can finally be comfortable and be free. They absolutely can’t be comfortable and free because my eye is always on them, not because I suspect anything with immediacy, but because I’m a person who generally expects the worst of somebody because I’ve seen the worst from people. So, if I have a feeling about someone, I am going to be watching like a hawk. I think that that really informs who she is. She doesn’t miss much. She wants to see the good in people. She would be thrilled if the good was the thing that came first, but she is expectant of something else. So, I think that that makes her character very interesting.

AX: Did you have any particular opinions, one way or the other, about vampire films and television before you became involved with LET THE RIGHT ONE IN?

ROSE: I love it. I’ve always loved it. I love the books, I love it all. So, that’s my opinion [laughs]. I loved the movie, when it first came out, I thought it was great. So, this was right up my alley.

ROSE: I don’t think that I work differently with him. There’s obviously a difference of being an adult and a child, but I love this kid so much, I enjoy him so much, and we just really enjoyed each other, so it’s fun to work with him. And I think it’s a very easy familial bond, and his [real] mom is on set as well, and she’s a lovely, lovely person, and so, it’s joyous, spending time with them. I think that was the thing that I tried to do differently.

I tried to curse as little as possible. Sometimes I failed [laughs], but that’s something that I try to do when kids are around. But otherwise, I treat them like they’re professionals, because they are. While keeping in mind that you’re working with a child. There always has to be an awareness that you’re working with a child. But I let them be themselves, let them have their autonomy.

AX: Where do you shoot LET THE RIGHT ONE IN?

AX: So, you shoot where the story takes place. There are a lot of scenes outside in winter. What does working in the snow give you?

AX: And what would you most like people to get out of LET THE RIGHT ONE IN?

Related: Exclusive Interview with LET THE RIGHT ONE IN actress Madison Taylor Baez