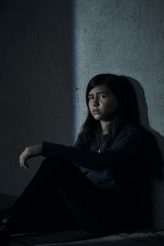 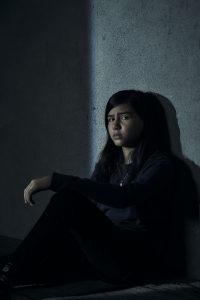 LET THE RIGHT ONE IN stars Madison Taylor Baez as the vampire Eleanor “Ellie” Kane. Ellie was turned ten years ago, but perpetually appears to be age twelve. Ellie’s loving, anguished father Mark, played by Demián Bichir, is in search of a cure – but also provides for Ellie by killing and taking blood from people he believes will not be missed.

Mark and Ellie have just moved into an apartment building in New York, where Ellie is befriended by Isaiah Cole (Ian Foreman), the lonely little boy who lives down the hall. Isaiah’s mother Naomi is protective of her son – and also happens to be a homicide detective.

Premiering on Showtime on Sunday, October 9, LET THE RIGHT ONE IN has been adapted as a television series by Andrew Hinderaker, after the original 2000 novel by Swedish John Ajvide Lindqvist was first adapted as an influential Swedish-language film in 2008, and remade as an American film, Let Me In, in 2010.

Over a Zoom call arranged by Showtime as part of the Television Critics Association (TCA) press tour, Baez discusses playing a conflicted vampire.

ASSIGNMENT X: Did you have any feelings one way or the other about the vampire genre before you became involved with LET THE RIGHT ONE IN? If you did, where does Eleanor fit into that?

MADISON TAYLOR BAEZ: I’m not going to lie. I didn’t like the vampire genre before. Everything was really, “Oh, being a vampire is so cool, we get to do all of this stuff, we get to fly, and jump from building to building.” [laughs] But I really did fall in love with this series, because it wasn’t focusing on everything good about being a vampire. It focused on the crucial reality of being a vampire, all of the hardships, the lengths the caretaker – the father, in my case – would go to for their daughter, their friend. It also shows everything bad – being isolated, not being able to go out in the sunlight, not to be a real kid, not to go to school. So, I want to say I fell in love with this version of the vampire genre.

AX: Eleanor is actually ten years older than she appears to be, which puts her in her twenties. Obviously, Eleanor isn’t trying to look as if she’s in her twenties, but did you put anything of that into your performance?

BAEZ: Well, she’s been a vampire for ten years, but I like to think of it as, she’s been stuck at twelve for ten years, because she’s not really able to go out and see what most people in their twenties are able to do, and she never really got to grow up, I should say. So, I really do think she’s just stuck as a kid, but she doesn’t really have all those nice things that a kid would normally have – friends, being able to go to school, certain connections besides just her dad.

AX: Speaking of her dad, did you and Demián Bichir spend any time together off-set to work on that daughter/father bond?

BAEZ: The time that me and Demián spent together was either on set filming, or just even off set, going to crafty [craft services, i.e., off-camera between-meals food and beverage for cast and crew], but just the time that I did spend with him – you can learn so much from Demián. He’s a great actor, great person. I really do think we formed a bond as we were filming more and more together, and I think that we took that bond of just us as people onto the set with us, into our characters.

BAEZ: I think when I’m around the adult actors, there’s a darkness that comes out, because their characters are so brutal, with what they have to do. Sometimes their characters bring out the dark side in the show. But with Ian Foreman, Isaiah, it’s that one relationship that lightens up the show. It brings the light that maybe there’s hope for Eleanor to have a friend, to have a life. So yeah, I do think there’s a difference, by Ian bringing out the light in the show, and all the other actors putting out the brutal reality.

AX: When Eleanor feeds, it is with a sort of intensity that most don’t normally bring to eating …

BAEZ: Yes. She gets pretty “hangry.”

AX: Did you base the feeding on anything in particular, whether she’s feeding directly off a person, or drinking blood out of a container?

AX: We see that Eleanor can grow fangs in the first episode. Do you ever have to talk with the fangs in, and if you do, did you have to practice not lisping?

BAEZ: When I had fangs in, they were CGI’ed in. The production handled all of that. They took photos of me [which were then used to create digital fang models]. Everything was CGI’ed in.

AX: At least the beginning of LET THE RIGHT ONE IN is set in New York in the winter. How is working in the snow in New York?

BAEZ: That was very interesting. It was a very long winter. When I first went to film the pilot, it was definitely cold. I was very cold. But by the end of the season, I kind of got used to it. Don’t get me wrong, it was still freezing, but that’s another thing that came along with my role. Vampires don’t get cold. So, I just had to adjust to it, I couldn’t really complain [laughs].

AX: In the first episode, there’s a scene where Ellie is up in a leafless tree. How did they get you into and out of the tree, and were you balanced on anything more than what you appear to be balanced on? Because it looked like those were very insubstantial branches.

AX: I think your biggest role before this was playing the young Selena Quintanilla, who was a famous real person. Is it more freeing to play Ellie in LET THE RIGHT ONE IN, because you don’t have to match to either a historical person, or somebody else who’s playing the older version of your character?

BAEZ: I’ve never really thought about this, actually. Playing Selena, it was such a light mood, it was nice being able to portray such an idol, somebody that people look up to. With this show, I kind of got to do my own thing. So, I’m torn. I think that there was a little bit more freedom in this show, just because I was able to be my own character, and put out everything the way that I wanted to do with Ellie.

AX: And what would you most like people to know about LET THE RIGHT ONE IN, or to get out of it?

BAEZ: Well, I want people to experience and to know it’s not all fun, being a vampire. There are many brutal hardships, and there are many people who, I want to say, do not have fun. It’s more a challenge than free play, and I really hope that this show shows the lengths that a father will go to protect his daughter.

Related: Exclusive Interview with LET THE RIGHT ONE IN actress Madison Taylor Baez