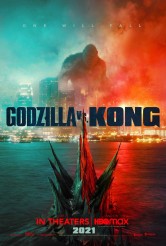 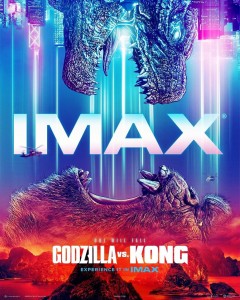 GODZILLA VS. KONG is the fourth entry (after GODZILLA, KONG: SKULL ISLAND, and GODZILLA: KING OF THE MONSTERS) in Warner Bros./Legendary Entertainment franchise that encompasses both of the title beings, as well as their fellow megafauna. The new movie is generally entertaining, if sometimes confusing, and occasionally wackier than seems intended.

One doesn’t want to get too spoilery at the top, but anybody who has seen the preceding films in the series will know that both Godzilla and Kong are presented as more or less heroic figures. Sure, they knock over helicopters and buildings and whatnot when provoked, but they ultimately protect humans from big, completely evil monsters.

Armed with just this foreknowledge, viewers can make a few informed guesses about where all this may be headed. In fact, it’s not tremendously surprising when a third sub-franchise enters the picture partway through.

We certainly get a lot of plotlines at the start. Scientists from Monarch Organization, which monitors the Titans (the series’ catch-all term for giant creatures), have recognized both Godzilla and Kong as alphas. This makes Monarch worried that the two will fight for dominance if not kept separate. A Monarch team, headed by Ilene Andrews (Rebecca Hall), has managed to sequester Kong, much to the anger of the giant ape. Rebecca’s adopted young daughter Jia (Kaylee Hottle) adores Kong, who seems to feel affection for the child.

Then we meet Bernie Hayes (Brian Tyree Henry), an irate tech worker and would-be whistleblower who works for Apex Cybernetics in Pensacola, Florida. In his off hours, Bernie also does a podcast devoted to Titans.

One of Bernie’s fans is Madison Russell (Millie Bobby Brown, reprising her role from GODZILLA: KING OF THE MONSTERS), now a high school student. Her Monarch official dad Mark (Kyle Chandler, also back from the previous installment) wants her to stay safely far away from his work. But when Godzilla does something unexpected, Madison feels compelled to find out what’s going on in order to save his reputation.

Then there’s Apex CEO Walter Simmons (Demian Bichir), who wants to restore humanity to its place as top species. He’s fixated on the idea of a power source from Hollow Earth, a Jules Verne-type theory that turns out to be literal here. To find it, Simmons enlists Nathan Lind (Alexander Skarsgard), who previously tried and failed to penetrate that realm. 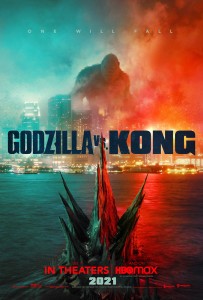 In other words, the plot of GODZILLA VS. KONG has a lot of spinning plates. This means there’s a lot of set-up before Godzilla and Kong get anywhere near each other. It should be said that Kong is extraordinarily well-realized. His facial features and even his eyes stand up to even the tightest closeups. No one is credited with a motion-capture performance, but whether that is involved or this is pure CGI, there’s a full character here. In fact, he may have more of an arc than most of those played by human actors.

Those actors are all fine. Brown, as usual, is stellar. Hall radiates warmth, and Hottle (a deaf performer playing a deaf character) is charming. Henry has fun with his timid but stalwart crusader, and Bichir is vivid as the silky-smooth, egotistic Simmons.

Max Borenstein, one of the scribes on KONG: SKULL ISLAND, is co-writer here (with Eric Pearson, working from a story by Terry Rossio and GODZILLA: KING OF THE MONSTERS scenarists Michael Dougherty & Zack Shields). He seems to have great love for the big gorilla, which translates into Kong getting to do some heroic deeds.

There seem to be discrepancies in Kong’s size. Since the VFX artists work with mathematical precision, this is likely more viewer perception than an actual factor in the film. However, because of camera angles, backgrounds, the placement of other characters and so on, there are times when Kong appears considerably larger than at others.

Godzilla, on the other hand, looks fine, but his main advocate here appears to be Madison. He is less the divine dragon of GODZILLA: KING OF THE MONSTERS and more just a mysterious, huge, unpredictable aquatic reptile. He’s got top billing, but it feels like GODZILLA VS. KONG doesn’t quite know what to do with their star.

Then there is the third act, which bravely attempts to stay the franchise course while simultaneously bringing in a new flavor. Let’s just say it will be dear to the hearts of some longtime GODZILLA fans, while much less welcome to others.

There are tons of questions set up that don’t get answered, which suggests a lot of cutting. It’s not like GODZILLA VS. KONG is starving for more exposition, but a little clarification would help.

Director Adam Wingard keeps the pace up, and has a lot of brightly-lit monster clash sequences. It may take a while to get there, but the movie is called GODZILLA VS. KONG, and he wants to make sure we see it when it happens.

GODZILLA VS. KONG comes in at just under two hours. It’s kind of a hot mess, but it’s got its strong suits, and it’s mostly fun.