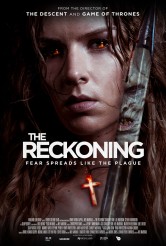 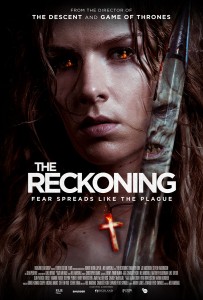 THE RECKONING is an artful but relatively serious-minded film that combines the twin horrors of witch-hunting and plague. A little reminiscent of 2010’s BLACK DEATH, this offering from director Neill Marshall and his co-writers, Charlotte Kirk & Edward Evers-Swindell, based on RED HEX, story by Antony Jones & Evers-Swindell, deals in magical realism and some fairly hardcore torture as a basis for delivering historical horror.

Titles inform us that we’re in 1665 England, the Year of the Great Plague. A black-and-white prologue sequence shows us a woman being arrested for witchcraft, as her husband and young daughter watch helplessly.

We switch to muted color, as young farmer’s wife Grace Haverstock (co-scenarist Kirk) returns to the family cottage to find her husband Joseph (Joe Anderson) hanging, dead. Flashbacks show the couple in happier times, as well as what led to the current tragedy.

Landowner Squire Pendleton (Steven Waddington) spares little time in trying to extort sexual favors from the widowed Grace. When he tries to force the issue, and she successfully fights back, Pendleton decides to accuse her of witchcraft. In the current climate of paranoia about the plague, most of the townsfolk are eager to go along.

Grace is arrested and thrown in the dungeon. Here, she begins seeing visions of her late husband, her late mother, and the Devil (Ian White).

Meanwhile, Pendleton brings in the most successful witchfinder in England, Moorcroft (Sean Pertwee) to wrest a confession out of Grace. Moorcroft isn’t what we might expect. He is quiet, erudite, and seems to genuinely believe that he is locked in a battle against evil, rather than acting as one of its principal agents.

The big questions in THE RECKONING come down to whether Grace can bear up under Moorcroft’s inquisition, whether there’s anything else Grace can do for her infant daughter, whether Moorcroft is sincere in his beliefs, where all of this is going, and, finally, whether something supernatural is afoot.

Marshall et al score a relatively rare success in having this last both ways. We never know if the apparitions are real, or simply products of several characters’ psyches. In practice, the ghostly and demonic touches serve chiefly to give THE RECKONING some jump scares and a horror movie patina, as it otherwise would be harder to market and arguably harder to watch.

The makers of THE RECKONING are inarguably in sympathy with the half-million women raped, mutilated, and murdered in the name of religion during the witch hunts. As such, they make a strong historical point that has modern resonance, especially during the current pandemic. However, showing the techniques used to force confessions from accused witches, even though not at the in-real-time excruciating style of, say, 12 YEARS A SLAVE, may test many viewers. There’s a fine line between showing (granted, despicable) characters getting off on a woman’s violation and being prurient. While THE RECKONING ultimately remains on the right side of this, given where it all goes, it feels like these sequences go longer than either storytelling or emotion requires.

Kirk gives a physically fearless performance, and conveys powerful inner fortitude. Pertwee is commendably nuanced, as is Suzanne Magowan as his loyal assistant. Waddington is appropriately entitled as the squire. Callum Goulden feels right for the period as a servant who feels for Grace’s plight. Anderson is good as upright spouse in flashbacks and as a ghost. Other strong performances are given by an ensemble that includes Rick Warden, Bill Fellows, Mark Ryan, Sarah Lambie, Leon Ockenden, and Indianna Ryan.

Luke Bryant’s cinematography and Ian Bailie’s production design provide some beautiful images. The walled city where most of the action takes place is striking, though we do wonder how someone addressed as “squire” is in charge of this imposing space.

As for where all this is going, well, the film is called THE RECKONING. Those who can make it through the second act will certainly be up for the third.