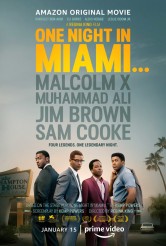 Movie Review: ONE NIGHT IN MIAMI

Fine performances and worthy topics in a historical what-if?

ONE NIGHT IN MIAMI jumps off from a real event: Cassius Clay’s victory as the World Heavyweight Boxing Champion on February 25, 1964. The film, based on the stage play by Kemp Powers, who wrote the screenplay, puts Clay (Eli Goree) together with Black activist Malcolm X (Kingsley Ben-Adir), football star Jim Brown (Aldis Hodge), and singer/songwriter luminary Sam Cooke (Leslie Odom Jr.). The men really were friends, and really did get together that evening, but there is little record of what they talked about.

In the film, Clay asks Brown and Cooke to join him at a small black-owned hotel in order to meet with Malcolm X. Brown and Cooke are disgruntled to find that strict Muslim host Malcolm X has neither women nor liquor on hand (while it doesn’t conflict with his beliefs, he’s also neglected to procure much in the way of food).

Director Regina King opens up the proceedings as much as she can, with a boxing match here, a musical performance there, and a few visits to Malcolm X’s home, where we meet his devoted wife Betty (Joaquina Kalukango) and their daughters.

But most of ONE NIGHT IN MIAMI takes place in the hotel room. While Clay is the man of the hour, much of the drama derives from the philosophical differences between Malcolm X and Cooke. Malcolm X doesn’t believe that Cooke should be working to entertain white audiences, and that he should focus his performing and compositional genius on raising up Black people. Cooke feels that his economic prowess (mightier than we might have supposed) is a rising tide that lifts all boats. Clay isn’t sure where his own particular triumph fits into this; Brown mostly tries to play peacemaker, when his own work isn’t called into question.

ONE NIGHT IN MIAMI is primarily an exploration of what it meant to be a successful Black man in America. While there are elements that are specific to 1964, much of it sadly remains true in the present.

Writer Powers is articulate and thoughtful, and his dialogue is strong. He also manages to suggest certain outcomes stemming from the night. These work for the film, whether or not the results are in fact historically linked to any real-life connections between the characters.

Ben-Adir has the charisma, conviction, and introspection we associate with Malcolm X, as well as a sweetness and diffidence that befit his private persona here. In terms of depicting Malcolm X’s views, ONE NIGHT IN MIAMI sticks with social issues, rather than exploring violence vs. pacifism – possibly a missed opportunity, given Clay and Brown’s professions.

Goree gives Clay a giddy, wondering quality. We might have been able to think the real man was a bit full of himself, but there’s such joy in Goree’s performance that we can’t fault Clay’s ego – right now, he’s the best, and why shouldn’t he take delight in it?

Odom shows us the different faces Cooke uses for friends, fans, and foes. He does a great vocal impersonation of Cooke on several songs, and puts heart into it when explaining business strategy, turning what could be exposition into a tale of righteous conquest. 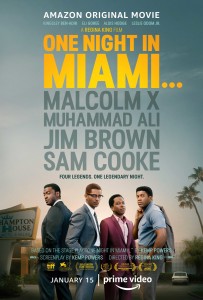 Hodge creates empathy for Brown, someone keenly aware of his own gifts, but not blinded by them. In ONE NIGHT IN MIAMI, Brown is also written as the most emotionally available of the group, and Hodge conveys the honesty and warmth that makes us see why he is so trusted.

Making her feature directorial debut, King shows restraint, never pressing the cast to hit points too hard. The results feel human-scaled and credible. When she can get moments of visual flash in, she does – there’s a striking shot of limo doors opening – but she doesn’t let it become distracting. In keeping with how many people think of Miami, there’s a coral and turquoise color scheme that runs through the sets, the lighting, and even some of the costumes.

ONE NIGHT IN MIAMI as a film winds up providing many of the pleasures of its original stage version – worthy topics, fine acting. However, because it (probably wisely) doesn’t want to tie its imagined discussions to any real-world results, there’s only so much impact it can allow itself to have on the characters, and therefore on us. It’s well-made and easily watchable, but it floats like a butterfly more than it stings like a bee.