The actor talks playing an extraterrestrial posing as human 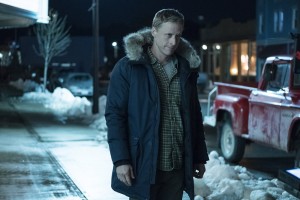 RESIDENT ALIEN is a live-action series based on the graphic Dark Horse Comics novel by Steve Parkhouse. Premiering Wednesday, January 27, on Syfy, RESIDENT ALIEN stars Alan Tudyk as the title character, who crash-landed on Earth. Able to make himself look human (except to one little boy, played by Judah Prehn), the alien has assumed the identity of small-town veterinarian Harry Vanderspeigle. Although completely confused by human behavior, Harry finds that he actually likes the townspeople. This may be a problem, since he’s been sent here to wipe out humanity.

Tudyk, originally from Texas, is known for work in films and TV, including FIREFLY, ROGUE ONE: A STAR WARS STORY, TUCKER AND DALE VS. EVIL, DOLLHOUSE, I, ROBOT, and DOOM PATROL. Tudyk was nominated for an Emmy for playing convention-going actor Wray Nerely in the short-form series he created, CON MAN, and won an Annie for his voice performance as the villainous King Candy in the film WRECK-IT-RALPH.

At Syfy’s portion of a pre-COVID Television Critics Association press tour, Tudyk talks about his work in RESIDENT ALIEN with a small group of reporters following a larger Q&A.

ASSIGNMENT X: You’ve obviously been on a lot of TV shows, but this is the first time you’re playing the title character …

TUDYK: I like it. I enjoy, I like the show, which helps, and yes, it is fun to be the lead character, the guy who does the narration, because he brings you along in the story. I play the resident alien, but he also narrates throughout, so he is the audience’s narrator. They’re hearing his story. It’s a gift to play that.

AX: Your character reacts to himself in the mirror a lot, trying to figure out how he should appear to his neighbors. How do you gauge those scenes?

TUDYK: If I rehearse something and I film it and watch it, as long as there’s truth to it, that’s mainly what I’m looking for. That’s what I find. I can be as big, alien, odd as possible, but as long as it’s honest, it looks right. But a lot of times, it’s about subtlety, so yeah. I just find the truth of whatever moment is written for whatever script, and I’ll follow that journey wherever it leads, for however long.

I am uncomfortable. I mean, when I play the character, there is a lot of discomfort going on inside of me, because it’s sort of like you’re standing behind yourself, looking out, because that’s what he would be doing. It’s like he’s wearing a mask, the mask that looks like me, as he’s looking out at the world. But I didn’t look in the mirror and find the creepiest, weirdest faces. It’s usually the other way around. Like, “Let me find the not-creepy, weird face,” which I spent a lot of time this morning doing. How am I doing?

AX: Were you a fan of the RESIDENT ALIEN graphic novel?

TUDYK: Not before. I didn’t know [the novel].

AX: Why does your character want to kill everybody on Earth? 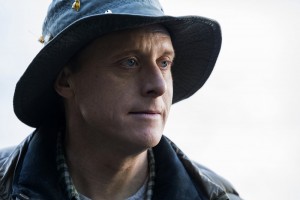 AX: Did you do any kind of back story for yourself about what it’s like on his planet?

TUDYK: Not for the alien. It comes out in the story, as we’re shooting it. You learn a little bit more about who he was before he came [to Earth], on his planet, and also, who Harry Vanderspeigle was before he was killed by the alien and taken over. Those scenes for me are the first time [playing a relatively normal person]. I’ve had the opportunity to play a lot of different things. The one thing I haven’t been able to play is just this normal guy who’s a doctor, who’s at this point in his life, he’s a heart doctor. He’s accomplished, and he’s just on vacation. This is his vacation cabin, when he gets killed.

AX: Didn’t you play a relatively normal guy in the movie about the boy who goes and commits a school shooting?

TUDYK: [laughs] No one’s seen that movie. BEAUTIFUL BOY, with Maria Bello and Michael Sheen. Yes, he was a pretty normal guy, but it was a very small role.

AX: It seems like Harry is going to start experiencing what we would Earthlings would refer to as moral conflicts. When he does experience private emotions, do they look on Harry the way they would look on normal humans, or does Harry express them differently when he’s by himself, or does he just go back to looking like an alien, and we can’t read his face?

TUDYK: The longer he’s on Earth, we can say – I think it’s a great thing, as an actor, to get to play, is that as he inhabits this body, it starts to play upon him. So, he gets to feel emotions. He’s not just a lizard brain or alien brain the entire time. He feels.

AX: It’s been announced that you’ll be returning to your ROGUE ONE: A STAR WARS STORY role of the robot K-2SO in the upcoming Disney+ series ANDOR, with Diego Luna also reprising his role as Cassian Andor. What are you looking forward to there?

TUDYK: Playing with Cassian, playing with Diego Luna, and being in the world of STAR WARS again. Especially after seeing THE MANDALORIAN and seeing what they can do with a series, how much fun it is to go into smaller stories.

AX: Did you learn anything the first time that’s going to be easier the second time?

AX: Will you do all the suit work for K-2 again?

TUDYK: Yeah. I don’t want anybody else doing that. That means a lot to me. They offered it up, but it’s not a voiceover job for me. Because his face doesn’t move, that’s what you have, is your body, to show emotion. And because of Sonny [Tudyk’s character in I, ROBOT], and because of theater. I’ve been trained. I’ve studied that [laughs], and it’s something I enjoy.

AX: Are you doing suit work in RESIDENT ALIEN, or do they have somebody else do the suit work for you, or is that all CGI?

TUDYK: There is someone who does the suit work for little stuff. Because you see Harry as an alien in reflections. [It would be too time-consuming to get Tudyk in and out of the suit when he’s required to look human for the rest of the scene.] So it’s a great way to remind the audience that I’m an alien doing certain things. If you see me drinking a cup of coffee, and then through the reflection in the mirror, you see an alien drink a cup of coffee, it’s a nice reminder to the audience who’s there in the room. We’ll use Keith for that. But when it’s acting, especially with the kid, because the kid and I have to come to a certain agreement at a certain point. So whenever there are any scenes just between he and I, it’s he and I. I get to wear the mask. It takes two-and-a-half hours [to get into the suit and mask]. 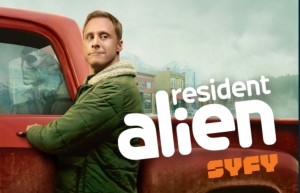 AX: Between the robots and now Harry the alien, have you developed a technique for these other-than-human bodily performances?

TUDYK: It’s very theatrical, yeah. There are some overlaps in just, for Harry, he’s learning to walk in this new body, and robots walk ergonomically, so they’re not too far off from one another. If you’re going to use the body as a machine to walk, you’re going to walk – it doesn’t look natural – as correctly as possible.

AX: And what would you most like people to know about RESIDENT ALIEN?