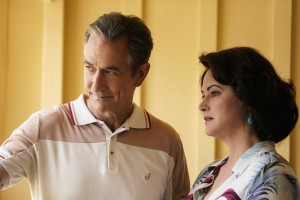 INTERROGATION, now streaming its entire ten-episode first season on CBS All-Access, is a murder procedural designed to be viewed out of order, the same way real police detectives explore real cold cases. Created by John Mankiewicz and Anders Weidemann, the series follows a Los Angeles-area murder case that stretches from 1983 to 2009. The audience is encouraged to view the opener first and the finale last, but otherwise experience evidence in whatever sequence they choose.

Strathairn, originally from San Francisco, earned an Oscar nomination for his lead performance as real-life newsman Edward Murrow in GOOD NIGHT, AND GOOD LUCK. He also won an Emmy for portraying Dr. Carlock in the HBO telefilm TEMPLE GRANDIN. Strathairn will be seen in Guillermo Del Toro’s upcoming remake of NIGHTMARE ALLEY. Other noteworthy credits include THE EXPANSE, BILLIONS, McMAFIA, THE BLACKLIST, the GODZILLA films, ALPHAS, LINCOLN, THE BOURNE LEGACY, L.A. CONFIDENTIAL, THE RIVER WILD, BOB ROBERTS, A LEAGUE OF THEIR OWN, EIGHT MEN OUT, MATEWAN, and RETURN OF THE SECAUCUS SEVEN.

ASSIGNMENT X: Most television series shoot scenes out of order, but INTERROGATION is told in an unusually fragmented way. Did that affect the way you approached the role at all?

DAVID STRATHAIRN: Not really. You just had to be very aware of what the character knew, at a given moment, so that you weren’t in any way indicating that you knew more than you should have at a given time. So that was a challenge, to keep things compartmentalized in terms of the arc of the character, and the arc of the story, too.

AX: Well, Henry Fisher knows more about Eric’s history than we do until we see the “Henry Fisher” episode. A lot of the back story is surprising. As Henry, you also have to age over I guess it’s like thirty years because there are flashbacks to when Eric is a baby and a child, and then Henry is in the story for ten more years after Eric is arrested. How is it playing a character over thirty years?

STRATHAIRN: It requires a lot of help, especially from the hair and makeup people, who were great on this. Fortunately, we didn’t spend too much time with the real young Henry, and only a few moments with the older Henry. So the focus was more with the middle-aged Henry, when the event is really transpiring, before Eric goes into prison. The earlier Henry was but a moment of the adoption. 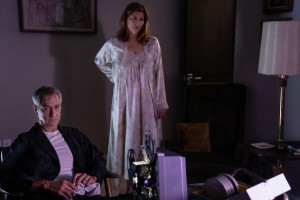 AX: There are a couple of scenes, like where Henry is watching Eric trying to master bicycle riding …

STRATHAIRN: Yeah. You have to be aware of, “Okay, maybe I stood a little straighter then, I moved with a little more nimbleness.” But like I said, having an expert hair and makeup department really helps you.

AX: In the portion ten years after the crime, Henry is very sick. Had you played people who were terminally ill before?

STRATHAIRN: Only one episode of HOUSE, years ago. No. Dealing with his condition, which was essentially exaggerated, complicated COPD towards the end of his life, took a little research. Your lungs become so clogged that it’s very hard to catch your breath. I had to figure out exactly how to indicate that, the breathing, whatever apparatus that he may have needed.

AX: John Mankiewicz, who co-created INTERROGATION, was a writer/executive producer on HOUSE. Was HOUSE the first time you’d worked with him?

STRATHAIRN: Yes, as a matter of fact.

AX: Had you worked with him between now and then?

STRATHAIRN: No. But it was great to have John there on the set [on INTERROGATION]. He’s very generous and very certain at the same time about anything I needed to ask him – how they envisioned Henry, the version of Henry. He was always a great repository of encouragement, and also information.

AX: INTERROGATION is based on an actual case. Did you interact with anybody from the real case?

AX: So you didn’t feel like there was any research required on that front?

STRATHAIRN: No, because the characters are mostly inspired by the ones who inspired the story to begin with. And I asked, “Is it necessary to be in any way indicative of the real person?”, and they said, “No.” It is of itself more of an inspiration of, and therefore the creation becomes more our own, as opposed to a replication. 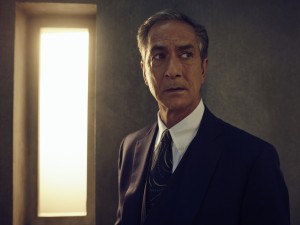 AX: Much of INTERROGATION takes place in the ‘80s. How is that as a period to return to?

STRATHAIRN: The cars were amazing. It makes you think, “Oh, my God, they made cars that big, and that comfortable?” [laughs] Probably, “And used that much gasoline?” It was fun to remember that. And also, the house we were in, the interior design of the house was quite nostalgic.

AX: How were your scenes with Kyle Gallner? What does Henry believe about his son, what does Henry want to believe, and how much does he hate his wife, played by Joanna Going, at that point?

STRATHAIRN: Well, Henry wants to believe his son is innocent. How much he really knows? I think he based his desire for Eric’s innocence more on him being a father more than him having any factual information, or real palpable evidence. And as far as Henry’s relationship with his wife, it’s complicated, because he sort of foisted this child upon her. And then her relationship with Eric had a whole different tenor. It was much more difficult than mine was, and in many ways, I was an absentee father, with this idea of being a dad, and what a son should be. And to Henry’s credit, he did love his son, but he wasn’t that involved, hands-on, in the nurturing, and he probably went to his grave feeling, “I could have done more. I should have been more aware of what my son was going through.” I’m not sure if he would have been able to help him, but I’m sure he felt he could have tried better. And the relationship between he and his wife, I think it was difficult because of Eric’s trajectory and what Eric’s life became. That kind of predicated their relationship.

AX: Did you have any rehearsal team for the scenes with Kyle Gallner? Did you think about it, or did you just sort of let it happen as you were playing the scene?

STRATHAIRN: Well, you think about it twenty-four/seven when you are preparing. We didn’t have that much time together before we actually started shooting. And then shooting out of sequence was also a big challenge because my involvement with him as my son was always dependent on the event, so we just threw ourselves into it. I felt very connected to Eric via what Kyle was doing. I know there was a trust between the two of us, that we were dealing with a relationship that was very complicated, very fraught, but underneath it all, the essence of a father/son, a young man wanting his father to be a father, and a father wanting his son to be his idealized son. So there was love there that was just caught up in the brambles of the situation. I felt very comfortable. I felt with Kyle, we jumped in hand in hand over this cliff.

You always wish that you could have mined it a little deeper, but I felt, given the time we had, and what we accomplished in that time, was palpable and a very moving relationship. He was great to work with, and was so present, and the give and take was very alive. It was like two musicians coming together, and having never played the music together, but okay, listening, and the back and forth felt a lot easier that it may have looked.

AX: There was a sense of real anguish in those scenes …

STRATHAIRN: Yeah, that’s a great word for it. The anguish between the two, each other’s anguish, the anguish created by the whole situation, was very palpable.

AX: Have you seen the whole of INTERROGATION yet?

STRATHAIRN: I haven’t, no.

AX: I was just curious what your take on the format is, because if you want to put the episodes in chronological order, that’s an option …

STRATHAIRN: Right. I think it’s an exciting format, that you could watch it chronologically, but the way they’ve decided to do it, like a cold case, like really a detective story, I think this format is much more akin to the way cold case detectives actually find their evidence, randomly, everything’s sort of collated after [time has passed]. And I think this is an exciting way to go at something like this. It’s like the film RASHOMON, where you have different versions of the same event, only in this one, you have potentially innocent or culpable people throughout.

AX: Do you play slightly different versions of Henry, depending on whose point of view we’re in?

STRATHAIRN: No. That was also one of the challenges, was to hold on to who Henry was, to commit to who this man is.

AX: While it only went for two seasons and has been gone for a while now, I really liked your Syfy Channel series ALPHAS. I was sorry it didn’t go longer …

STRATHAIRN: I was, too. I thought they had something going. It could’ve had a much longer life, I think. The whole concept was very eccentric, with superhumans who were actually humans [who had personal problems]. I liked it. It’s too bad.

AX: I think it maybe came along shortly ahead of its natural curve, because there was kind of a wave of that afterwards.

STRATHAIRN: Yeah. Well, some things do break the ice before anybody’s there to save them.

AX: And what would you most like people to know about INTERROGATION? The show, not the questioning procedure …

STRATHAIRN: Right. I would encourage them to not watch the last episode [until the end], tease themselves by not doing that, and challenge themselves to be so-called detectives throughout, before any revelations happen. I think it would be much more fun that way. It’s like read a book, but don’t go to the last chapter before you read the book.