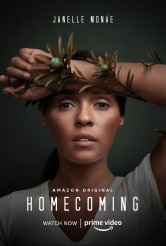 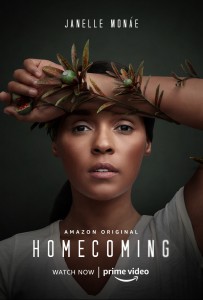 HOMECOMING, now in its second season, is based on a podcast created by Eli Horowitz and Micah Bloomberg. Horowitz and Bloomberg developed their 2016 audio production as a television drama, which premiered on Amazon in 2018. The debut season was nominated for Golden Globes for Best Drama, Best Performance by an Actress (Julia Roberts) in a Television Series Drama, and Best Performance by an Actor (Stephen James) in a Television Series Drama.

The first season of HOMECOMING starred Roberts (one of the series’ executive producers) as Heidi Bergman, who worked as a social worker at the Homecoming Transitional Support Center, a facility where former military personnel go to be reintegrated into civilian life. Strangely, Heidi can’t really remember her time with Homecoming, or exactly what happened there.

In Season 2 of HOMECOMING, which premiered in May, Janelle Monae heads up a mostly new cast, although James is back as veteran Walter Cruz and Hong Chau reprises her role as Audrey Temple.

In this exclusive interview, co-creator Bloomberg discusses both seasons of HOMECOMING.

ASSIGNMENT X: When you and Eli Horowitz were first conceiving the HOMECOMING podcast, what was the seed of the premise?

AX: At the start, it doesn’t seem like Heidi is aware that she is stuck anywhere. 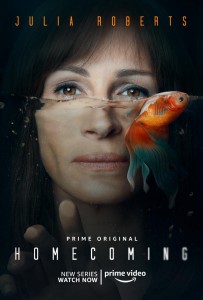 AX: How did you begin adding layers to it?

BLOOMBERG: Well, then we thought, “So there are all these people who are stuck there. Maybe there’s somebody there who understands what’s going on.” And that’s really the idea of Heidi.

AX: How do you and Eli Horowitz divide up your creative/writing work?

BLOOMBERG: We spend a lot of time talking about the superstructure of the story, how things are going to pan out structurally, and then I do the first pass. I’ll take a scene, and start it off, and work on it for awhile, and then I’ll send it to Eli, and he’ll make some edits, and some changes, and then send it back, and then he’ll incorporate it into whatever working document that we have. At the end of the day, we’ll talk about how the document is shaping up, and where things are headed. Often, we’ll go back, and do stuff again and again, and the documents end up going back and forth online.

AX: What benefit do you find in working with a second person? Because a lot of times, people who work as teams genuinely have blanks that they need somebody else to fill in, whereas if you’re able to take a first pass, you’re able to at least sketch in the draft …

BLOOMBERG: Yeah. The reason I think we’re such good collaborators is that I get very lost in the characters, and the way that they talk, and the way that the individual scenes work. Eli has a really great sense of the overall structure of a story and what’s going on. And so our talents are well-matched, I would say. So that all the time, I’m controlling the tone. Keeping the overall structure of the story, that’s not really my strength, in that I find I’m a little bit better inside the scene with the characters.

AX: Has your working relationship with Eli Horowitz changed at all over the course of doing HOMECOMING?

BLOOMBERG: It’s deepened. We’ve been working together now almost every day for two years on the same show, so we’ve gotten to know each other really well, and things have continued to get deeper and more complex and interesting every day.

AX: When HOMECOMING went from the audio-only medium of a podcast to the audio/visual medium of streaming television drama, did you have to adapt your thinking about it at all, or were you just going, “Okay, this is what I envisioned, and now we just make it look like that”?

BLOOMBERG: Yeah. The thing about a podcast is, if a prop doesn’t make a sound, it doesn’t exist. If two people aren’t in the room together, then they don’t talk, so they don’t exist. If they don’t say where they are, you don’t understand what’s going on around them. So when we came into doing a TV show, you can use things like props and setting and stuff to help tell the story. So the scenes ended up condensing and getting kind of smaller.

AX: You’ve said that you toned down the speculative fiction elements of the HOMECOMING podcast, but are they still there?

BLOOMBERG: Yeah, absolutely. I think there’s an overhanging sort of science-fiction or mystery or genre thriller aspect to it, but what always drives us, we always try to focus on our characters, what’s strange, what’s eccentric, and what’s new about it.

AX: HOMECOMING was picked up for two seasons from the start. Are Seasons 1 and Season 2 both based on the HOMECOMING podcast, or when you got the two-season pickup, did you go, “Okay, we need to expand our mythology to fill up two seasons”?

BLOOMBERG: B. Season 2 is not based on the podcast. We had to expand our mythology, because we didn’t have quite enough story, and then also, the characters, when we did Season 1 of the TV show, kind of took us in a different direction.

AX: The HOMECOMING podcast began in 2016. The world has changed quite a lot since then. Have any of those real-world changes affected what you’re doing with the show?

BLOOMBERG: I don’t think so. We try to keep politics and stuff boiling beneath the surface, more than we let that take the headline on anything.

AX: Certain norms have changed. Is there stuff in HOMECOMING that you thought at the beginning, “Well, we can’t do this, because this would seem too bizarre” that’s now like, “Well, maybe we can do that, because that’s happening anyway”?

BLOOMBERG: I’d have to think about that. I wonder. Sometimes political figures occur to us as we’re writing some of these characters. Sometimes the behavior of politics these days, and the lines that have been moved around, kind of inform us in the way that some of our characters think.

AX: In crafting Janelle Monae’s character Jackie for Season 2, were you looking to create someone as different from Julia Roberts’s character Heidi as you could, or are there certain similarities that need to be there for her to be on the journey that she’s on with HOMECOMING?

BLOOMBERG: No, I think we tried to do somebody from whole cloth who was totally different – we felt like we completed Heidi’s story in a good way, and so we were excited to get into a character that really was across the world, and a very different person. I think when you watch this season, you’ll see we’re talking about a very different animal.

AX: Sam Esmail, who created MR. ROBOT, and directed the entire first season of HOMECOMING, is one of your executive producers. How much input has he had?

AX: Without asking for spoilers for Season 2, do you have a favorite episode or scene from Season 1?

BLOOMBERG: Season 1? Season 1, I like Carrasco’s [played by Shea Whigham] visit to Geist, when Colin [played by Bobby Cannavale] bullsh*ts him onto the elevator and gets rid of him. I just love the two actors in that scene, I think those performers are amazing.

AX: Have you left yourself openings for Season 3 if you get picked up?

AX: And what would you most like people to know about Season 2 of HOMECOMING?

BLOOMBERG: I would say that they don’t know – things aren’t what they seem. I think they should be ready to question everything they saw in Season 1.

This interview was conducted during Amazon’s portion of the Winter 2020 Television Critics Association (TCA) press tour.